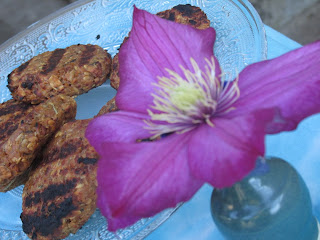 When we first became vegetarians some seven or so years ago we made Better Burgers quite a bit.  Vegan Vittles was the first veg cookbook we bought, in fact.  We were still working on a vegetarian cooking repertoire and these burgers were comfort food that reminded us of flavors and textures the we were familiar with and enjoyed.  Our palates were not yet used to the more exotic flavors of the world which we've now been opened to through our dietary changes.

We don't make Better Burgers nearly as much these days--maybe once or twice a year-- in favor of burgers made from kidney beans, chickpeas, black beans, etc.  Dry beans are much cheaper than textured vegetable protein (TVP) and since TVP--plant-based though it may be--is indeed still a processed food we've moved away from it and towards the whole food option.

TVP is made primarily from soybeans.  Its soy beans dried, crumbled, and with nearly all the fat removed.  When prepared it is similar to ground meat in texture.  It is used widely in food service cafeterias, especially at schools, hospitals, and businesses, as a cost-saving, fat-reducing mechanism.  For example, our cafeteria here on campus combines TVP with ground beef in dishes such as lasagna and meatloaf.  The students have no idea.  The idea is that the cafeteria saves money and provides a dish lower in fat and cholesterol for diners.   TVP is cheap and since it is dried when purchased it can be stored for a long time making it popular in food survival kits as well.

But frequently TVP is not organic and since it is made with soybeans I am not really interested anymore since virtually all soybeans are genetically modified unless certified organic.  When I first became a vegetarian I knew nothing about GMOs in food.  I was only concerned with animals in my foods.  But, the more I learned and the closer I became to where my food was coming from the more I realized I was concerned with both aspects.

People frequently mention concerns to me about eating too much soy because they know I am a vegetarian.  I myself believe that soy itself is not the problem (I'm looking at Japan, China, etc with a centuries long history of eating whole and fermented soy foods without crazy rates of breast cancer and shrinking testicles and all sorts of things that have been blamed on soy in the US). To my mind, its that we're breaking down soy into bits and parts like soy protein isolate, soy lecithin, hydrolyzed soy protein, etc., instead of using the whole.  And that we're messing with the genes of this ancient plant in new and completely unnatural ways of which we do not know the long-term implications.  We may not know for generations.

That is all new.

I don't really want to be a test subject.  Its hard not to be in this day and age, but I can try to reduce my exposure to undertested new products and practices.  So, I tend to avoid GMOs and processed soy (well, processed foods in general, really) except under special circumstances such as dinners out with friends, birthday parties, etc.  I'm not militant about it.  Its just my preference.

So, I couldn't begin to recall the last time we made Better Burgers.  We just make bean burgers now.  I am completely satisfied by regular old bean burgers.  Matt enjoys them a lot, too, but I think that he does have a special liking for the Better Burgers.  I can't deny that they do have a wonderful flavor and texture because of the TVP.  They're about a million times better, in my opinion, than nearly all commercially available veg burgers, many of which are also TVP based.

So when Matt spotted a pouch of organic TVP at the discount grocer last month he purchased it expressly with making Better Burgers in mind.  It was a nice treat and perfectly timed for grilling season with tender grilled asparagus on the side. 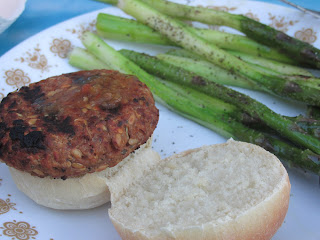