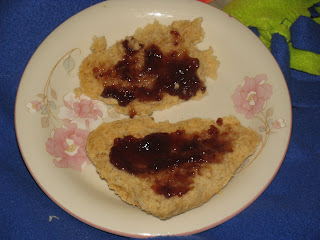 I have a serious sweet tooth problem.  Once I have the desire there is no denying it.  Once I have a little I always want more!  I have it a lot more under control now that I basically eschew GMO foods, which rules out most store-bought candy with all its corn and soy.  So, now when I want a sweet treat I make it myself or have fruit (nature's candy!).  (Micheal Pollan has said something along the lines of "eat junk food if you want just make it yourself" which I can relate to well.  My junk food is a whole heck of a lot better than, say, Nestle's)

A few nights ago I wanted cake.  Bad.  I thought about making one, but basically had plans to make a birthday cake Sunday and another birthday cake on Wednesday so it seemed...perhaps unnecessary to make a third.  That didn't stop me from wishing I had one for dessert after dinner though.  When I mentioned it to Matt it just passed on my sweet tooth...and my disappointment that I hadn't made one..to him.  Oh well, I said, we don't really need cake anyways.  I will have cake this weekend.

But, Matt had other ideas.  Scones, he rationalized, are quite like cake, but don't take very long at all to make.  So he whipped up some scones, bless his heart, at 11pm. 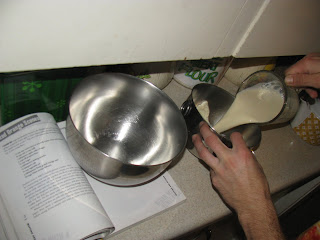 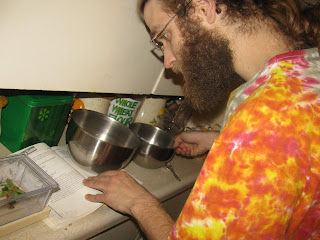 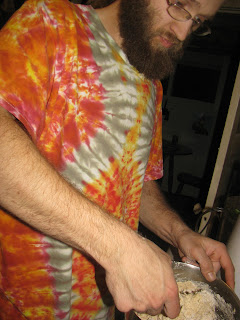 It had been a while since we'd had any scones.  When we first "discovered" them Matt was making them just about every other day for breakfast, but years pass and they had become less frequent on our plates.  That was so long ago it was back when I literally didn't cook.  Oh, how things change. 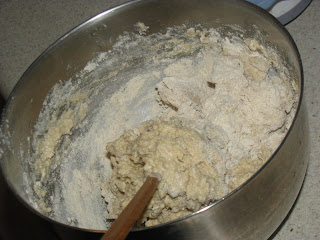 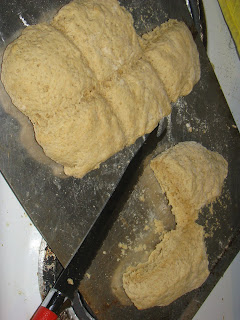 This recipe is more or less from the cookbook Vegan with a Vengeance.  I saw more or less because Matt and I are basically incapable of following a recipe to the letter.  We always deviate from the actual recipe, no matter what that recipe is for.

Ingredients1 1/4 C nondairy milk1 T apple cider vinegar3 C flour1/3 C sugar2 T baking powder1/4 t salt1/3 vegetable oilDirectionsPreheat oven to 400 degrees F.In a small bowl, combine milk and vinegar.  Set aside.In a large bowl, mix together flour, baking powder, salt, and sugar.Add the oil as well as the milk mixture.Mix until just combined so that dough is clumpy, but not sticky.Drop by 1/4 cupfuls onto baking stone, or lightly greased baking sheet.  Pat the tops down to round them out a bit.Bake 12-15 minutes until slightly browned on the bottom and firm on the top.

For a more true scone shape, divide the dough in half.  Form each half into a six inch disk and cut into six wedges.  Arrange wedges on baking stone and bake following time above. 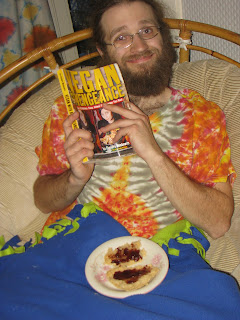