Matt did an inventory in our store room and freezer recently.  It includes the goodies we've put up this year as well as some we had leftover from the previous year.  It isn't totally inclusive--the jams and jellies are absent, say, and the dried peppers and herbs--but close enough.

It is always reassuring to see just how good we will be eating this winter.  Apple pies, enchiladas, chili, roast veg, stir-fry, pizzas, green bean casserole, spaghetti, breakfast scrambles, tamales, Indian feasts, and...so much more.  My only canning regret from this year is that we didn't discover that jalapeno salsa recipe earlier.  I wish we had more of that stashed away.  Next year!
By BLD in MT No comments:

I am thankful that we gathered once again around a table heaped with bountiful food, prepared with love, eaten with laughter. 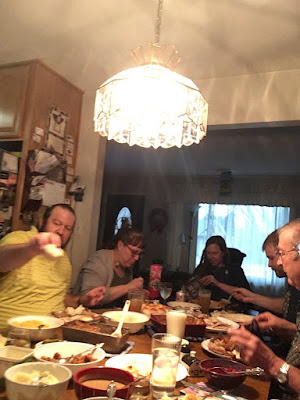 I am thankful that, despite the pandemic that just won't quit, things feel safer this year than they did last year, what with our vaccines and all. 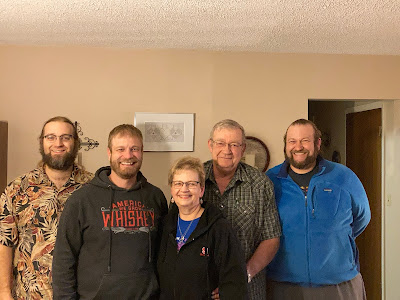 I am thankful for these moments. 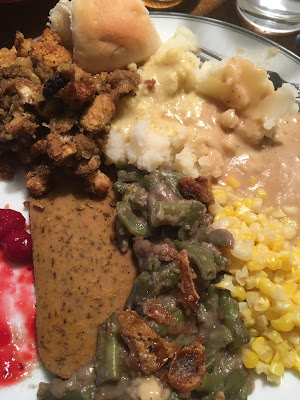 "Spaghetti Sucks" - That New Pasta I Keep Hearing About

This spring Matt told me about a new pasta he'd heard about on The Sporkful, a food podcast with the tagline "It's not for foodies, it's for eaters."  The pasta is called cascatelli--Italian for waterfall--and is the product of a three-year quest to make a more-perfect pasta.  As a rather enthusiastic pasta eater, I was shocked to hear about this.  I guess, silly me, I thought pasta was already pretty perfect.

But, Dan Pashman had a dream!  He designed cascatelli with three criteria in mind--these make up his ideal pasta--"sauceability (how readily sauce adheres), forkability (ease of getting and keeping it on a fork) and toothsinkability (how satisfying it is to sink your teeth into)."    He goes on to say note that, "most of the pasta shapes out there are only good at one or two.”

Apparently there is a large segment of people, Dan Pashman and my darling husband included, who think "spaghetti sucks."   I had no idea.  For me that's the classic!  I love spaghetti.  I enjoy twirling up a nice long noodle.  I love 'em with red sauce or with roast veg.  Matt basically never cooks spaghetti.  He leans toward a shorter, chunkier pasta.  I had noticed this, but I guess I didn't realize how widely held this option might be.  The only pasta I'm not much fond of is angel hair and that's only because it is so easily overcooked, not because of shape or anything.

Being from the Spaghetti Sucks camp, Matt was immediately intrigued by Dan Pashman's project.  Once Matt put cascatelli on my radar it kept popping up everywhere.  Everywhere!  I read about it in Popular Mechanics, Smithsonian, Science News, and Chemical and Engineering News as I processed new issues of these magazines at the library.  I heard a piece on NPR.  America's Test Kitchen, our culinary gurus, wrote about it.  Most recently, Time magazine named it one of the best 100 inventions of 2021.

A few weeks ahead of our June anniversary I put in an order for some cascatelli, knowing Matt would love it.  Buuuuuuuut the demand for this new-noodle-everyone-is-talking-about vastly, vastly outpaced production.  I was told to expect the pasta closer to Matt's birthday in September instead.  Oopsy.  Bad planning on my part.  Dan Pashman partnered with a small craft pasta company called Sfoglini in the Hudson Valley.  They use all organic American grains and old-world techniques.  I appreciate their blend of tradition and innovation.  I'd actually like to try some of their other pasta shapes.

Despite my poor timing, Matt was still excited by the gift.  They finally arrived the first week of September and were well worth the wait.

Those cascatelli noodles really are cool looking and very tasty.  The "sauce trough" and ruffles really do help hold more sauce, making each bite more flavorful.  They're easy to cook to perfect al dente, again, I think the ruffles have something to do with it.  The "toothsinkability" is pretty solid, even if I didn't know that was something I was really looking for in a pasta.  (Side note: The terms used for all three of the ideal pasta criteria bring to mind William Faulkner's delightfully inventive wordplay.)

I am still going to insist on spaghetti every now and then--variety is the spice of life, eh?--but I really can see what all the hubbub was about.  Cascatelli is a dang good pasta.  I have not doubt that we will buy it again/it will become a household pasta staple in our pasta basket.  Good job, Dan Pashman.

Matt and I aren't huge on digital technology.  We're obviously no luddites, but we employ a selective approach to it.  There are practical applications and advantages to new tech and a tools (gadgets, apps, websites), but there are also serious drawbacks and negative impacts (both personally and societally, if you ask me).  We weigh the pros and cons pretty carefully before deciding how we want to engage with these emerging electronic tools.  We're slow adopters.  We don't rush out and get the newest model or the latest device.  We like to wait and watch a while first.  See how it goes.

This is all a prelude so that I can share an amusing exchange I had with a city employee recently.  They're installing a sidewalk on our street.  A couple of city workers with shovels and a backhoe were in front of our house digging around in order to locate the cables/wires/lines connecting my house to various services.  As I was rolling my bicycle down the driveway one of them stopped me because he couldn't find all the cables he expected to find.

I thought it was pretty great.  It made us both laugh.  Well, all three of us, once I shared the story with Matt, too.

Shortly after we bought our house was a bad storm that knocked down some (above ground) wires.  We called the electric company to report the downed wires, but they ended up not being electrical.  I honestly cannot remember if they were related to cable tv or the internet service.  I'm guessing the latter now.  Since we didn't have cable or the internet they just clipped the cable and called it a day.  I had totally forgotten about it until this recent exchange happened.  I gather that internet cables are now run underground...and we don't have any, I guess.  :)

This reminds me:  I'm out of postage stamps.

By BLD in MT 5 comments:

If we grow potatoes--and we have taken a few years off here and there--we like to grow "weird" ones.  Fingerlings and colorful varieties and stuff like that.  We've grown the more standard spuds, like Russets and Yukon Golds, but they're just so mundane and aren't really that expensive at the store anyways.  Meanwhile, the price tag for a bag of fingerlings is outrageous more often than not.  So that's primarily what we grow, the oddball ones--and maybe a few hills of red potatoes so that Matt can enjoy Creamy Potatoes and Peas.
Purple potatoes are fantastic!   I didn't even know purple potatoes existed until Matt started getting seed catalogs all those years ago.  This is actually true of all the vegetables. I thought all cauliflower was white.  I thought all carrots were orange.  I thought all beans were green.  And so on.
But, back to the potatoes.  We've grown some spuds that are merely purple skinned and some that have purple flesh all the way through.  Our most commonly planted purple variety is one called All Blue.  This year we grew some purple fingerlings which produced the most vibrantly purple potatoes yet.  They're solidly purple.  A deep, royal purple, too.  I think they're just beautiful.   If memory serves they're called Purple Peruvian Fingerlings.
Matt and I harvest potatoes in tandem--he forks the earth and I root around for the goods.  It is a gardening treasure hunt for two!  While we were digging spuds last week I remembered a funny story that I don't think I have ever shared here.
Back in 2016 we had a swell haul of potatoes.  We'd washed them* and they were spread out on towels to air dry before storage.  As I was walking through the kitchen the next day one of the "potatoes" caught my eye.  I stopped and, upon inspection, realized it was totally a rock.  A rock that we had harvested, washed, and weighed while it masqueraded as a purple potato.  It was a hoot.
That is about the only downfall to the purple varieties.  They're sorta camouflaged.  They blend in with the earth.  They can sure resemble rocks or clumps of dirt.  It requires closer attention while harvesting or else perfectly good potatoes get overlooked and/or rocks get harvested in addition to the spuds.  A red potato or a Yukon gold, they jump out visually in contrast to the garden soil.  Not so with those beautiful purple weirdos.  They're worth it though, 'cause they're so pretty.
Matt dug our final half row yesterday.  It was perfect timing since it rained heavily overnight.
*Matt, bless him, scrubs all of the potatoes prior to storage.  This is a rather tedious job when it comes to the fingerlings.  There are so many of them!
By BLD in MT 4 comments: