I love sauces.  I love spicy.  It only naturally follows that I love spicy sauces a whole lot.  This is my newest creation--finally--a sweet chili sauce that is still just hot enough. 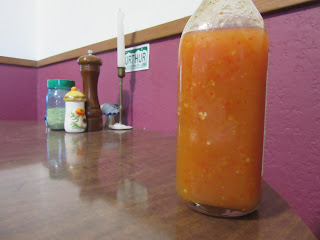 Puree all ingredients in a blender except the tapioca flour and 4 T of water.
Place the puree in a small saucepan and bring to a boil, stirring occasionally as you go.
Whisk tapioca and remaining water together in a small bowl.
Add tapioca mixture to saucepan and simmer until sauce thickens as desired.
Cool, bottle, and store in the fridge.
This makes about two cups, depending on how thick you let it get.  It can get VERY thick if you're not careful.  I like to make a bottle that is pourable, but I also like to have a nice and thick chili sauce for dipping. 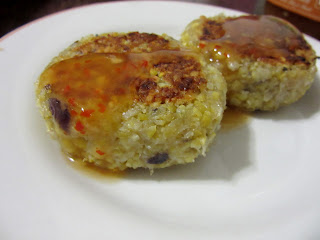 While it is fantastic on Asian dishes, as the name might imply, I have also sampled it in a variety of other ways, too.  Burgers topped with sauteed mushrooms and chili sauce was quite excellent, as was a dollop on breakfast potatoes, roast veg, or falafel, as pictured above.
By BLD in MT No comments:

"...but a dead tree may be as arresting, as filled with personality, in death as it is in life.  Even in its final moments, when the massive trunk lies prone and it has moldered into a ridge covered with mosses and fungi, it arrives at a fitting and noble end.  It enriches and refreshes the earth.  And later, as part of other green and growing things, it rises again."  - Edwin Way Teale
I love learning.  The label I've learned from the library world is that I am a "life-long learner."  That is one of the reasons I find travel so compelling.  There are always new birds, new plants, new accents, new foods, and more to learn and discover.  On our megavacation to the rainforest on the Olympic peninsula last fall we learned about nurse logs.  We don't have nurse logs like that out here in Montana--I suspect because it isn't moist enough.  We thought they were rather fascinating.
Nurse logs are trees which fall to the ground and, as they decay, become a source of nutrient and protection for a new generation of trees (not to mention moss, fungus, etc.).  The new trees actually grow right out of their fallen benefactor.  As we hiked we'd find a nurse log with hundreds of saplings reaching for the sky from their perch on top--over and over again.  They were everywhere.
Eventually the nurse log decays away completely, often leaving the roots of their young companions suspended in air several feet above the ground.  The whole process is incredibly neat.
Matt and I were talking about it as we hiked--about why we'd never seen such a thing as we hiked in Yellowstone and the Beartooths.  We figured that while it is entirely probable that nurse trees exist in the lush forests of NW Montana, most of our state is too arid and/or devoid of trees for nurse logs to be commonplace.

Then we realized that while nurse logs were new the phenomenon wasn't wholly unknown to us.  Just different.  Our first hand experience comes in the form of nurse rocks though, not trees.
Nurse rocks are often remnants of our glacial past in the form of "erratics" scattered across the land from the mountains to the plains.  However they can also come to be through other processes of time and erosion.  Nurse rocks create microclimates which are beneficial to plants and animals alike by extending the growing season, holding moisture, providing shade and more.  One study from Glacier National Park found that 63% of trees were growing beside a rock.  63%!

Here is a cool segment from Montana PBS (in text and audio) about nurse rocks in Montana, for anyone who wants to learn a bit more.

And then nature took our education on one step further.
While we were traipsing about the Sonoran Desert we learned about the relationship between saguaro cacti and nurse trees.  Young saguaros frequently make their start at the base of a tree or shrub which helps provide shade and increased moisture.  Upon learning this we instantly made the correlation between this and nurse logs/rocks up north.  It was marvelous to realize how dramatically different each of these landscapes are--rainforest to desert, mountains to plains--yet they're not without their similarities.  I thought this was totally remarkable.
Nurse logs decay away and leave the next generation to their growth.  Nurse rocks are sometimes cracked by their tree companions, but more commonly see them live out their days side by side.  The same rock might nurse generations of trees, in fact.  Saguaros usually out-compete and outgrow their shorter-lived shrubby neighbors, to the detriment of the nurse tree.

Still.  It all goes to illustrate the interconnection of life, nature, the universe and all that that encompasses.  Even the towering saguaro once needed a little help getting there.  The tides need to moon.  We need the earth.  It is all so cool and connected that it boggles my mind with the integrated complexity of it all.
What a world we're blessed to experience!  Each and every part of it has so much to show, to teach, to give.
By BLD in MT No comments:

We do most of our shopping at the co-op where Matt works.  However, we were pretty excited when our buddy, Josh, clued us in about the fact there is a dedicated Asian grocery store here.*  Amaya Oriental Market is, unfortunately for me, located pretty much across town, but none the less Matt and I made a jaunt up to the heights recently to check it out.

We were very pleased with the excursion, too, I must say.  There were loads--and I mean loads--of things that I've not seen for sale anywhere locally--brands and products.  There were brands from China, Vietnam, Thailand, the Philippines, and more.  There was liver paste in a can (no thanks) and giant bags of dried galangal.  There were frozen ducks and cans of vegetarian sausage.  We had to restrain ourselves from buying an absurd amount of noodles.  There were noodles I'd never even heard of before!  We bought some that are made from tapioca...no wheat or rice involved.  We picked ourselves out a fantastic little treat for the drive home--coconut rolls--which were akin to a light butter cookie (Matt says a krumkake), but made out of coconut and palm tree-like shrub called pandanus.  Again, I'd never even heard of it before.
There were certainly products in there that I'd avoid either because they're made from animals (lots of fish and pork) or loaded with preservatives and other things I cannot pronounce, but there was plenty that was totally up my alley.  We got a yellow curry paste that was just divine--and made of ingredients I could totally picture such as lemongrass, ginger, turmeric, etc.  It is fantastic with breakfast potatoes--about a hundred times better than the rather generic (but widely available) Thai Kitchen brand we've bought in the past.  We got a can of salted black beans because we'd never had them and they periodically pop up in our Asian cookbooks.  I bought a can of coconut water with toasted bits of coconut swimming around in it.  They sell this sort of drink at Siam Thai, but I'd never considered that it might be a Thai equivalent to a can of soda.
We got the most ridiculous bargain on saffron.  I admit it is likely not the highest grade, but still!  Beautiful golden saffron!  There were also a bunch of different mushrooms.  We got a substantial bag of dried shiitakes for like $3.  It was crazy.

The woman working was very friendly and helpful.  The computer system was down and she was adding up everything with a pad and pen.  She didn't seem at all ruffled by this.  There was a TV in the corner playing some foreign-language program.  That was interesting, too.  We're not known as a real diverse community, but more so than one might think, I guess. 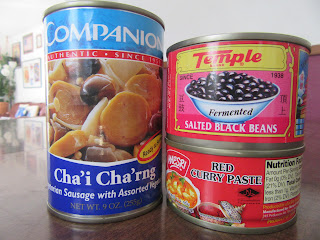 *Note:  For years we've been aware of a small shop, of sorts, in the backroom of our favorite restaurant, Siam Thai.  They sell the products they use in cooking at the restaurant--rice noodles, curry paste, tapioca, fish sauce, etc.  We hit it up every time we visit Siam Thai, though the selection is a bit limited.  It always feels a bit weird to me, too, just making my way into the backroom, stepping around the vacuum or whatever else is stored back there, and poking around on the shelves.  I always feel obligated to ask first.  I can't just bring myself to barge into the backroom of my own direction.  Don't get me wrong.  The Siam Thai Market is totally cool, just with a pretty narrow scope.  It is a Thai market, not an Asian market, and a pretty tiny one at that.  It is much more conveniently located for me though.
By BLD in MT 5 comments: 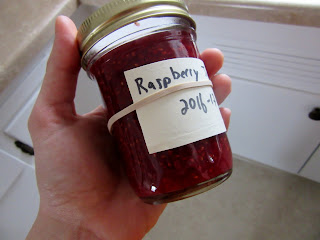 We had a great season for berries last year.  Our best yet.  We ate all of the strawberries and a lot of raspberries, but popped a few bags of raspberries and currants in the freezer for later. 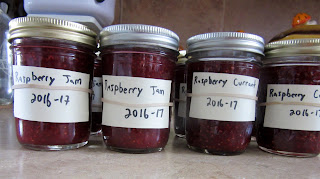 Months later--last week to be exact--we were down to our last couple jars of jelly/jam.  Matt pulled the fruit from the freezer, thawed it, and made up a couple batches of some extraordinarily tasty jam.  One batch was a blend of raspberry and currant.  The other was just plain ol' raspberry, which always make me think of my grandma.  It is still not as good as Grandma's raspberry jam (what is?!), but pretty dang close.

After comparing a half dozen recipes from our various canning resources, Matt opted no to use any pectin this time.  Instead he just simmered the fruity concoction down until it was as thick as he wanted.  It has set perfectly and we've already eaten an entire jar.  At Bunco last week I made an applesauce cake and served each slice with a dollop of jam on top.  It was so simple and scrumptious I could hardly believe it.  I ate a second piece even.  I couldn't resist. 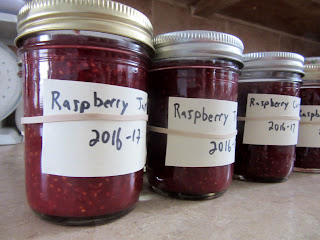 I'm so thankful we put in the berry patch pretty much first thing when we bought our house.  It will be five years years here in just a couple days.  Crazy.
By BLD in MT 2 comments:

Breakfast Potatoes are a pretty big deal around our house.  We love 'em.   We eat them a few time a week.  This is especially true when we've got freshly dug potatoes with that special, earthy flavor element that only comes from potatoes recently pulled from the earth.  When they're fresh we hardly do anything to them.  Diced and pan-fried in a splash of oil with just a pinch of salt.  When the potatoes are getting older--either because they came from the store or because they were dug from our garden months ago--I like to play around with some variations on the Breakfast Potato theme.  This is one of my new favorites. 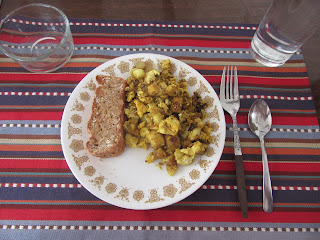 Put a tablespoon-ish of oil in a skillet.
Add chopped onions and potatoes and cook, stirring occasionally, until they're almost fully cooked.
Add remaining ingredients and continue to cook until potatoes are completly tender.
Serves two.

If you prefer your garlic mellowed out a bit you can cook the garlic along with the onions and potatoes, but I like to add it at the end to maximize that awesome garlic flavor.

The turmeric doesn't really add much in the way of flavor, if you ask me, but I think the golden color it imparts just really seals the deal.
By BLD in MT 3 comments: