A Ginger By Any Other Name 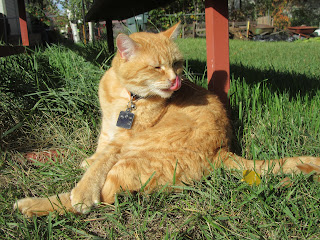 When Ginger was at the shelter she was called Goldie.  When Bill adopted her she was upgraded to Ginger.  She is totally a Ginger. 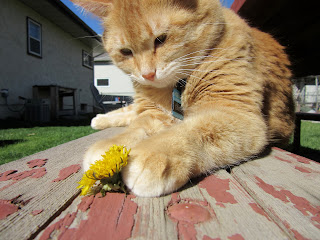 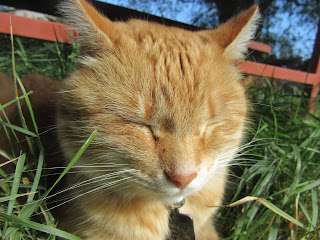 Never the less, I recently realized that I call her an awful lot of different things.  When I talk about her I usually stick with Ginger, but when I talk to her, not so much.  She has a lot of nicknames.  On any given day I run through a plentiful list of endearments for my kitty friend. 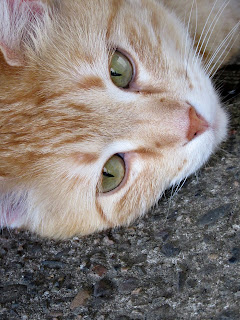 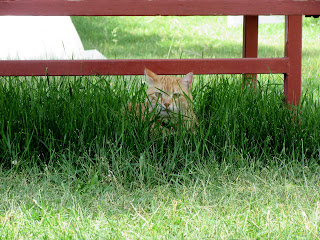 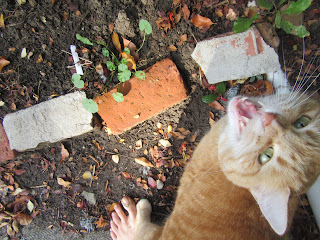 That final item on the list is what Matt deems her "full name."  I can explain the Muddy Paws (padding around in the garden) and Bloody Paws (killing voles in the compost pile) bit, but I have no idea where the McLastName series came from, nor why she is "the third."  For obvious reasons this name isn't used a lot and mostly in the summer (and almost exclusively by Matt). 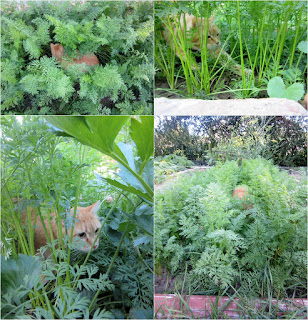 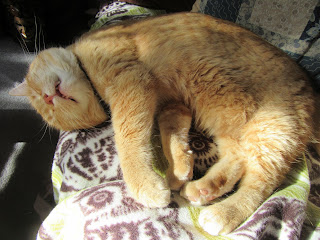 A Ginger by any other name is just as sweet.  Even when she is being little miss bossy-pants.  ;) 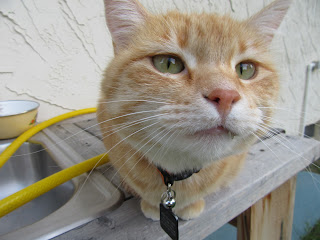 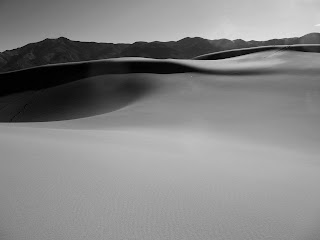 Each solitary grain is a sharp universe unto itself
By BLD in MT 4 comments:

I currently have two major food crushes.  When I think, "What should we have for dinner?" they both immediately leap to mind.  I can't stop thinking about new ways to incorporate them into my daily life.  They seem to improve so many of my already favorite dishes.  I am infatuated...with seitan and panko bread crumbs.
Panko
I can't remember what prompted us to buy some panko breadcrumbs this summer.  I suspect it was that America's Test Kitchen cookbook, but I'm not certain.  Well, now I'm ruined.  My finely ground homemade breadcrumbs pale in comparison to these airy, crispy delights.  I don't know that I can ever go back.

Just tossing a couple tablespoons with roast vegetables takes the dish to a whole new level.  It makes a magical crispy topping to a casserole and don't even get me started on using if for breading and frying!

There is nothing else to it, I guess.  We're going to have to figure out how to make our own now...  I'm deep in the research phase.
Seitan
I can vividly recall the moment I first fell in love with seitan (also known as "wheat meat").  It was a vegetarian take on chicken fried steak at Watercourse Foods in Denver.  It was humongous and so satisfying along with its mounds of mashed potatoes, gravy, and veg that Matt and I were both floored.  We went home and tried to make our own.  Even after playing around with different recipes the results were never fully satisfactory to us and it was a lot of time/work.  Store-bought seitan was either too expensive or we didn't care for it--or both.  So, we stopped eating seitan and began years' long culinary love affair with tofu.

That is until earlier this year  when I spotted a recipe for seitan from the slowcooker which looked ridiculously simple.  Mix ingredients, knead three minutes, plop in the slowcooker for several hours, boom--seitan.  After tweaking the recipe to my liking I finally have a seitan recipe that is everything we want it to be--an uncomplicated, fast and easy process which results in seitan with a very firm, chewy texture and deep savory flavor.
Slowcooker Seitan
2 cups vital wheat gluten
1/4 cup chickpea flour
1/4 cup nutritional yeast
1 t onion powder
1 t garlic powder
1/2 t salt
fresh pepper, to taste
1/3 cup tamari or soy sauce (divided)
1 T olive oil
1 3/4 cup vegetable broth
1 large onion, quartered
4 cups water

In a large bowl combine the dry ingredients.  Stir in 3 tablespoons of tamari, as well as the oil and broth.  Stir until well mixed.  Knead for three minutes.

Divide the seitan into four pieces and add it to the slowcooker along with the water, onion, and remaining tamari.

Cover and cook for about five hours on low.

Once cooked the seitan can be stored, submerged in some of the cooking liquid, for up to two weeks in the fridge.   The remaining cooking liquid can be used in place of vegetable broth in other recipes.

This makes about 2 1/2 pounds of seitan.
Matt is a better cook than me so I must say it delights me how pleased he is with this seitan.  We basically have a batch in the fridge at all times now, in addition to a pot of cooked beans or pressed block of tofu.  We've baked it, deep-fried it, stir-fried it, and ground it into burger.  It is dang good every way you slice it.

Panko breaded seitan cutlets are basically my new favorite food.
I could really go for one right about now...  Or seven.
By BLD in MT 3 comments:

This is a project I've had on the back burner of my mind for eons now it seems--turning a sweater into a cardigan. 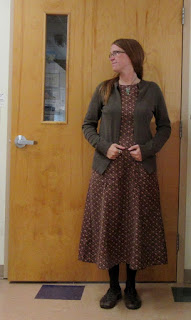 I got this brown, soft, heavenly sweater at a clothes swap.  I've certainly worn it, but always wished it was a cardigan instead of a sweater.

I like that the top of my dress is still visible when I layer with a cardy rather than pull on a sweater.  I find it easier to maintain an ideal temperature in a cardigan, too. 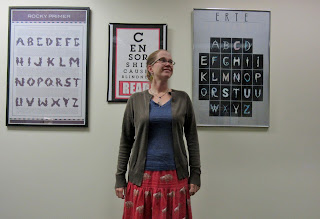 After pouring over some tutorials online I decided to try a new commercial sewing product--HeatNBond--for my sweater project.  HeatNBond is sort of like double sided tape and fusible interfacing combined.  It made making the new center hems a snap.

It is impossible for me to refrain from calling things like this cheating, but...  Matt was quick to point out that its not like I grew the cotton and wove the fabric either so why not just use all the sewing tools at my disposal.  He offers such a reasonably balanced perspective when I'm getting all hung up on my relationship to the modern world.

I cut down the center front of the sweater and then made a simple folded hem using the HeatNBond to give each side a smooth, finished edge.  I then topstiched with this really cute rainbow variegated thread.  ...Which turned out basically invisible in the cozy thickness of the material, but oh well. 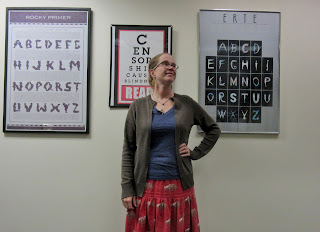 I considered adding a button or a hook and eye, but it already looks good, hangs well, and works to keep me warm and fashionable so I'm rolling with it.

I've already worn it way more in the past two weeks than I'd worn the sweater version during the previous year.  And it seriously only took 15 minute to make.  How cool is that?! 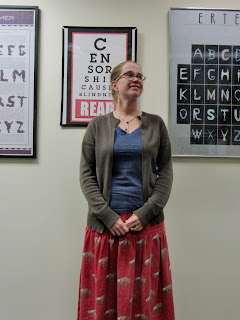 I did learn the hard way that it takes a lot more finesse if the original sweater is anything other than a straightforward crew or v-neck collar.  I've got one with a cute little Mandarin collar that is still not quite right...

You win some, you lose some.
By BLD in MT 7 comments: Today is the first day of the now annual tradition that is No-Shop November (NSN). 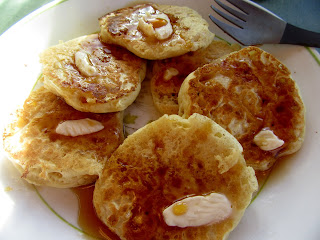 And Matt is going to buy a beer kit.  Quite a start to not-shopping, am I right?! 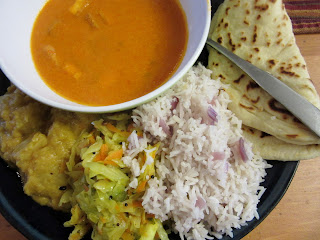 Seriously though, aside from that one beer oversight we're off and running with No-Shop November. 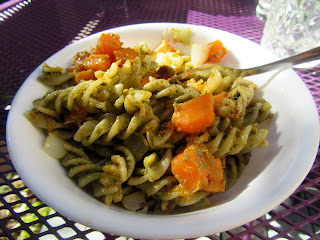 Actually, I think it is going to be an especially posh No-Shop month.  Our cupboards are packed to the brim.  We knew we only had access to our favorites at the Good Earth for a limited time and since they had markdowns up to 50% off it seemed only logical to stock up as much as possible.  We're swimming in lentils and rice noodles.  The bathroom cabinets are well filled with lotion and essential oils and toothpaste, too. 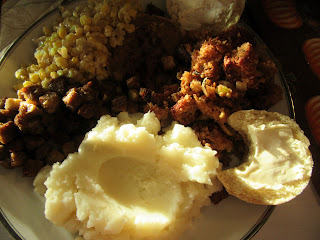 The "rules" remain the same as last year. 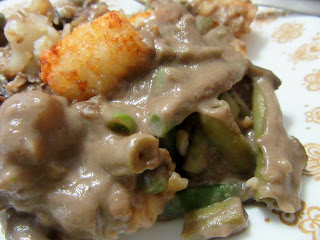 No spending whatsoever with three exceptions.  Money spent on concert tickets and gas for the car doesn't count.  We're also permitted a small beer allowance if we go out to concerts.  The rest we'll have to make ourselves with supplies on hand, barter for, or make do without. 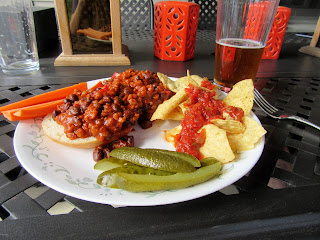 I revisited my all my earlier posts about NSN and since I had all the links handy I thought I might as well include the round-up for anyone who might have missed it in the past and wanted to get up to speed.  They're presented below. 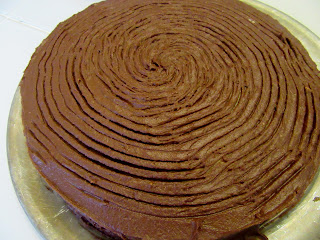 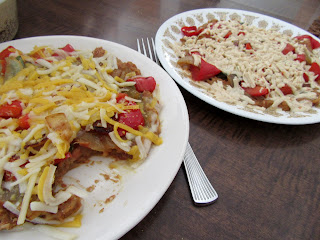