Today is my last day at work for the year.  Hip, hip, hooray!  I am also heading home to visit my father for several days, leaving Matt at home because he still has to work.  He works for Fedex and it is a very busy time for them so no extended holiday vacations for him.  Also, with the exception of Adam his family lives in Billings so he likes to stay here and be with them.  I actually am going to miss being a part of their holiday traditions, like driving down the street lit with luminaries with the light turned off or singing by candle light at church.  But, it is more than lovely that we can both still return home to be with our families.  My sister and niece arrive tonight and are allowing me to hitch a ride to my dad's with them.

Consequently, I may or may not get back on here until next year and just wanted to be sure to wish each and every one of you a very merry holiday season and a happy new year!  May you have lots of cheer and joy, time with friends and family, yummy foods for your belly, warm, cozy homes, and everything else that makes this such a special time of year!
By BLD in MT 5 comments:

Here are the photos from the Anonymous String Association show last Saturday.  I love bluegrass.  Maybe I've gone on about it before...I can't really remember.  I like pretty much all bluegrass from the uber-traditional Appalachian style to the modern with a drummer dancegrass style.  I like spiritual, traditional bluegrass and gritty, contemporary bluegrass.  The warmth of the strings and the way it makes me need to jump and bounce about is just too much for me.  It makes me oh so happy.   It makes me even happier when the makes-me-want-to-dance-awesome-tunes are being plucked out by my friends. 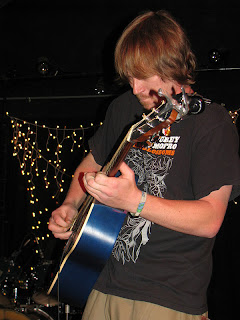 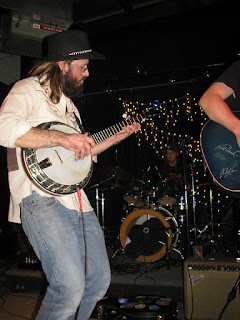 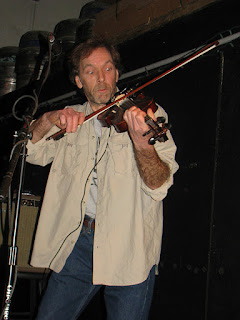 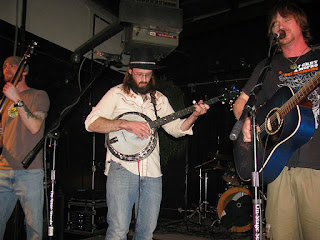 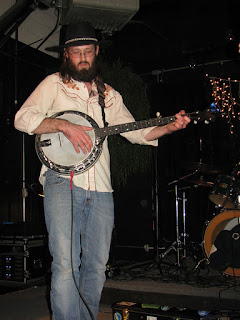 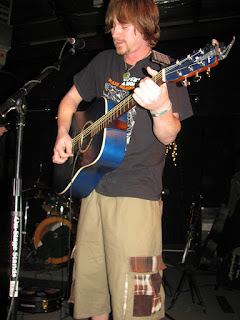 I like corn fritters and I like apple fritters so when I saw this recipe for carrot fritters I had to copy it down.  We made these to accompany our special December kabob barbeque.  They were tasty, not as much as corn fritters, but still tasty. 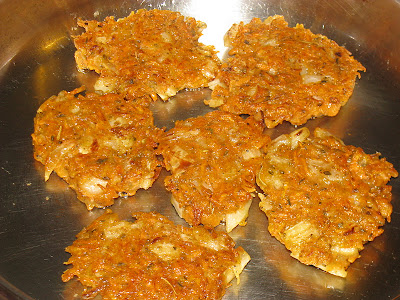 Carrot Fritters
2 Tablespoons flour
2 teaspoons ground cumin
1 clove garlic, minced
2 "eggs" (I used Ener-G)
3 carrots, grated
2 teaspoons dried oregano
1/2 of a small onion, finely chopped
salt and pepper, to taste
oil, for frying
Combine flour, cumin, garlic, oregano, and onion.
Add eggs.
Mix well.
Squeeze out any excess water/juice from the grated carrots.
Add to other ingredients.
Salt and pepper to taste.
Drop by large spoonfuls into a pan of heated oil.
Fry until golden, about 3-5 minutes on each side.
By BLD in MT No comments: 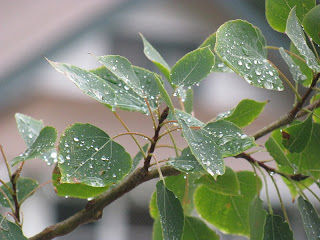 I really enjoy this series of cake photos from Jonnie's "surprise" birthday party.  She is so cute and it was such a fun time. 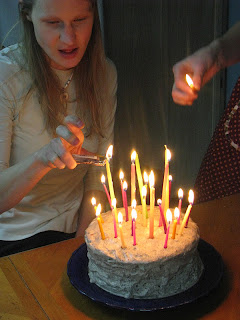 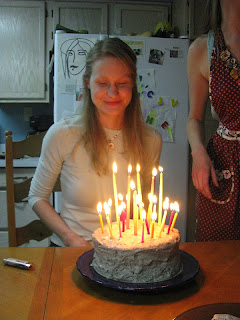 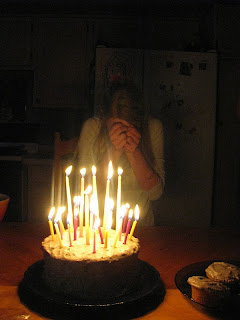 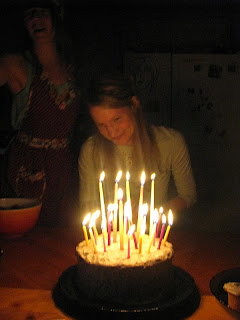 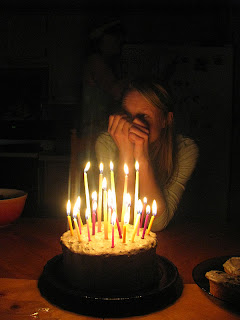 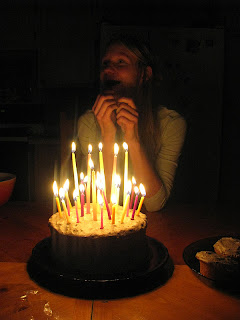 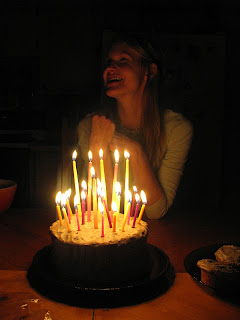 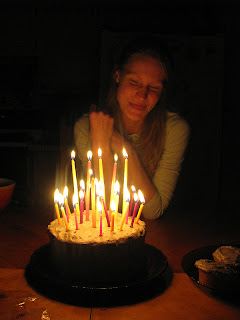 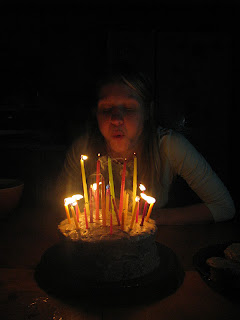 I had just the most perfect weekend.  First off it was simply glorious outside.  Whilst I love the magical visual effect of snow, and desire a snowy Christmas, I am certainly enjoying the warmer December weather while it lasts.  It was 45-50 degrees F this weekend.  And it's the middle of December...in Montana!  Hip, hip, hooray! 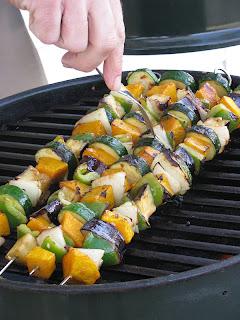 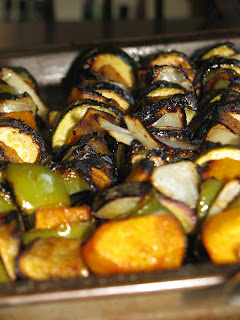 Since it was so nice we figured we could sneak in one more outdoor grilling event this year.  I don't quite understand how the "grilled" taste can make foods I like even better!  But, it does. 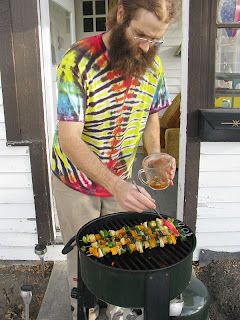 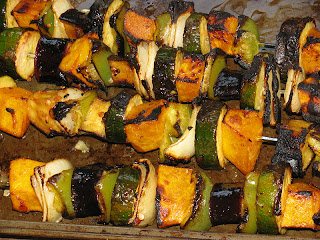 We also had a very special concert to attend on Saturday evening.  Our friend, Sean, was in a bluegrass band called The Anonymous String Association, which sadly took a break over a year ago primarily because one band member moved to Hawaii.  Well, Jess came back to visit and so a reunion show was most certainly in order.  They sounded so, SO good too.  You'd have never known they took a year off and had only a couple practices with the whole band before this show.  It was one of those shows where afterwards all anyone could think of to say was how tremendous a performance it had been.  It was incredible, but also a little bittersweet because we don't know when it will happen again.  Still, it was a blessing to our little community of bluegrass lovers who boogied like there was no tomorrow.   I hadn't danced barefoot for far too long it seems.  I have photos, but blogger isn't cooperating with them so I will just have to post them later.

On Sunday my girlfriends threw a surprise birthday party for another friend, Jonnie.  While it ended up not being a surprise (Jonnie was told the night before by an intoxicated friend after the bluegrass show) it was still a highly successful gathering.  Cake, bruschetta, tie-dye, hula hoop making, music, pinata, pomegranates, punch, and of course, a whole lot of laughing (like when Jen nearly hit the TV instead of the pinata or when Genoa got squirted quite well with pomegranate juice).  It was great. 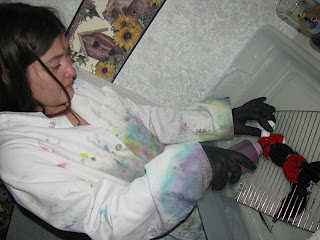 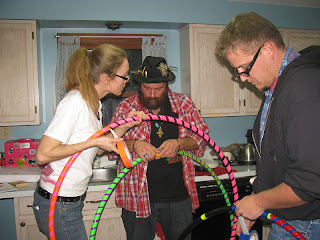 Then, after all the birthday fun, I topped the evening off with hot tubing and stimulating conversation at a hotel with a friend visiting from out of town.  It was the most superb way to end the totally awesome weekend!
By BLD in MT 6 comments: 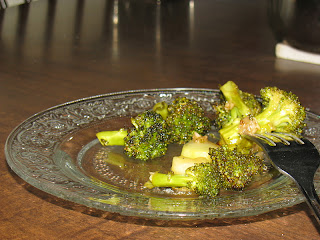 So, I've posted about roasting broccoli before.  It is still the only way I find that particular vegetable at all palatable.  I'd pretty much have to be starving before I'd eat steamed broccoli, I think.  I've also posted about how I think just about everything is delicious when roasted.  It is possibly my favorite cooking method.

Matt found a new roast broccoli recipe the other day.  It really didn't sound all that different than the other recipe we'd been using.  Broccoli, garlic, lemon, oil.  But, this recipe did have one new twist.  It called for roasting the broccoli stems, not just the florets! 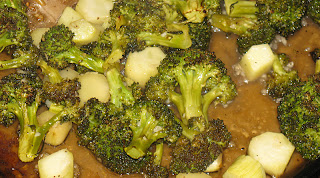 Prior to reading this recipe I just thought that you didn't eat the thick, tough stems of broccoli plants.  I tossed them into the compost bin, trying my best to remember to chop them into smaller, more readily compostable bits as requested by Matt, compost pile tender.  Well, those days are over!  Broccoli is so, SO much more thrifty if you use the whole thing.  I mean, really, the stock is a huge part of its weight.  Why didn't I learn this sooner?!  Actually, I know the answer to that.  Until this year I considered broccoli as more of a poison than a vegetable and I wasn't really looking for thrifty ways to eat more of it. 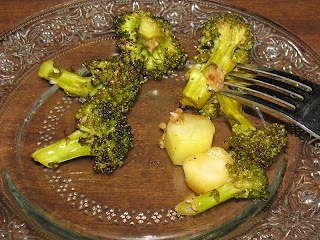 Preheat oven to 500 degrees F.
Chop all the florets off as you usually would, leaving them in bite sized piece.
Strip the whole length of the remaining stem with vegetable peeler.  I'm told you want to peel it well or else it might get a little "woody."
Cut the stem into bite sized rings.


Arrange pieces of broccoli stem and florets in a large baking pan. It is okay if they are close together.


Using a small bowl and the back of a spoon  (or a mortar with a pestle if you have one) smash the garlic with the salt and pepper until it is a fairly smooth paste.
Put the lemon juice and oil in a small bowl.
Whisk in the garlic paste.
Pour the mixture evenly over the broccoli and turn broccoli until they are all coated.
Roast for 20-25 minutes, until the florets are starting to brown and the stems are tender when poked with a knife.
By BLD in MT 11 comments: 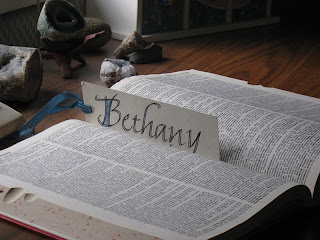 I am a firm believer in the fact that every household should have a dictionary.  Ideally, a real paper dictionary too, not just the ability to access one via computer.  A dictionary is a very valuable, and underrated, household tool.  Beyond just the definition of words you may not know there are  historical places and figures.  There is science, art, architecture, and philosophy.  You'd probably be surprised at what sort of questions can be answered by just a dictionary.

I use mine nearly daily.

Like yesterday, when Matt and I were trying to decide what exactly made a pot of chili a chili and not just another soup.  Basically, I was not understanding the concept of a white chili.  "Without the tomatoes, isn't that just soup?" I asked him.  He said he thought as long as it had chili powder in it it was chili.  I disagreed because I've used chili powder in other soups before and never thought of them as chili. 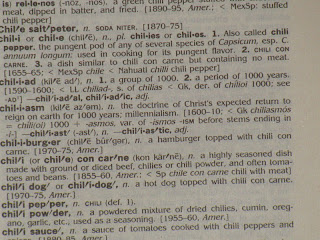 So, time to break out the dictionary.

I suppose in most American households it would be time to break out Google, but we don't really have the internet at our home.  So, dictionary to the rescue.  (And it works almost every time and is often just as fast or faster than when my guests try to look it up on the web using their phones, for the record.) 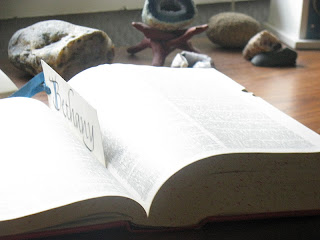 It turns out on the subject of chili Matt was pretty much right, though to be technical it seems "chili" is any dish seasoned with chili peppers, not necessarily powder made from said pepper, but that is probably splitting hairs.

While I was looking up chili I found quite the oddity, too.    "Chil'e pine', n. MONKEY PUZZLE." 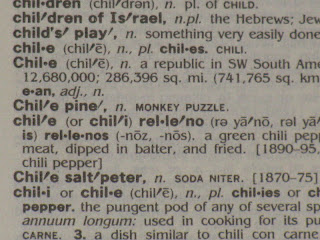 What on earth does that mean?  I turned to Matt and told him, "Now the dictionary is making me ask questions, not just answering them!"  I haven't yet bothered to try to actually figure out what it means.  It just made me laugh.

I suppose it is because of my library occupation, but whenever I visit someone's home I am drawn to their bookshelf.  I enjoy looking over the shelves--seeing what others read.  And I always notice when there is a dictionary.
By BLD in MT 5 comments: