Puttering Around the Garden 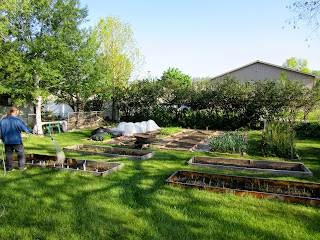 The currants are really going gangbusters this year.  There are already a few green currants alongside a mass of blossoms.  Last year we got something like six currants.  Its looking much more productive this year.  This will be its third year, I think. 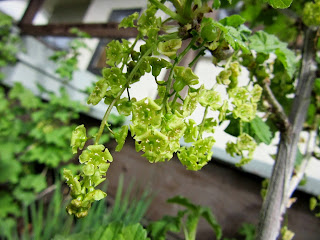 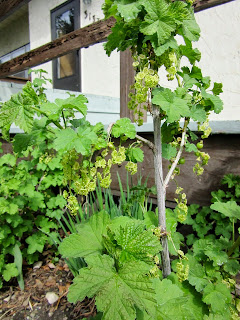 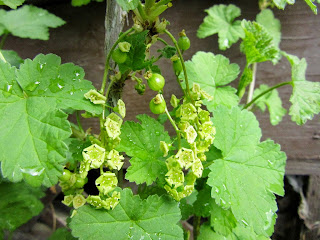 The blueberries are in their second year.  One of them is not doing so hot.  The other has set small delicate white-and-pink blossoms.  Only a few, but they're the first and we're pleased.  The blueberry bush is also adorned with lovely leaves.  They're rimmed in a dusty-rose color.  Their green leaves blush with it.  Its quite an attractive plant, really. 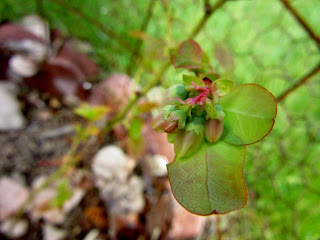 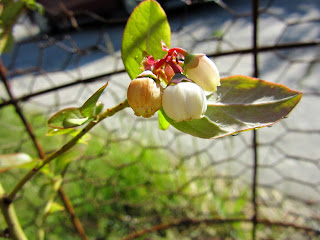 The tulips have come and gone now.  The last one along the drive fell to petals at the end of last week.  They're so pretty and fleeting and a welcome sign of spring for me.  Now that they're gone it seems to indicate Summer will soon be in full swing. 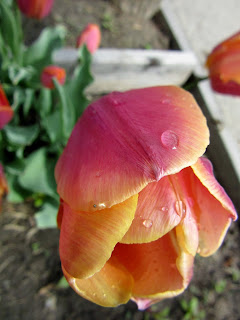 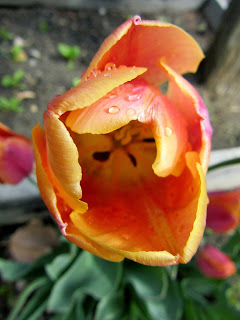 We planted some rainbow chard around the tulips when they were still forming their flower buds.  Now, by the time the tulip blossoms are gone, the pretty pink and red and green chard has grown up around them, filling out the bed with color again--though of a different sort for sure.  I think rainbow chard is quite attractive--an excellent choice for a front yard garden, I think. 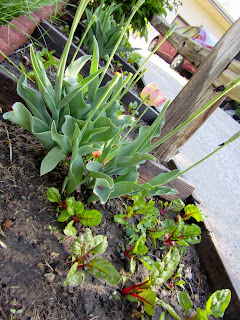 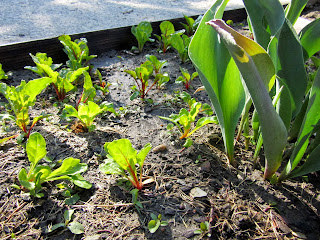 The bleeding heart is still blooming.  The wild rose bush out front set off its first blossom two days ago.  The peonies are just about there, almost bursting with potential flower. 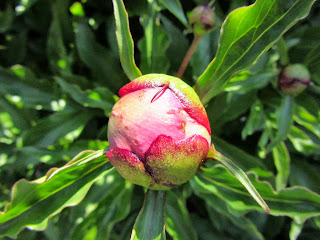 The raspberries have come back well.  This will be their third year, too.  Last year the yield was such that we mostly eat them right off the plant--they almost never made it into the house.  This year I'd love for a small batch of raspberry jam to be possible.  Its my favorite and makes me think of my Grandma Nina and her homemade rolls slathered with jam from the root cellar.  Store-bought is no comparison.  I am crossing my fingers....  I can wait. 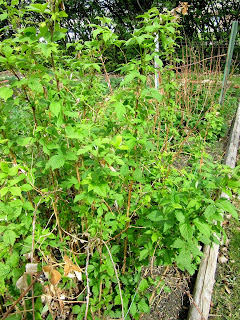 We have two varieties of raspberries--Red Heritage and Fall Gold.  I find it interesting how obvious their difference is in vegetation growth.  The photo above is of the Red Heritage and the canes are almost totally hidden.  The photo below is of the Fall Golds and their new growth is still significantly shorter.  I took the photos of the same day!  I thought it was pretty neat. 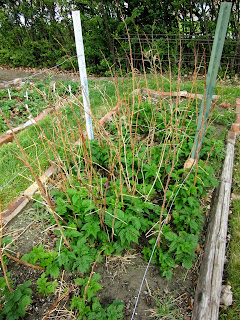 Matt thinned out the old strawberry plants we put in when we moved here three years ago.  They were less productive last year and from what we've read its a good idea to thin out the older plants and root new runners to keep the bed at its peak production.  They looked pretty angry about the interference for a while, but have regrouped now that they've had time to readjust. 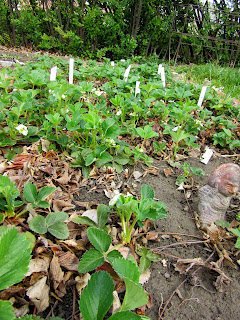 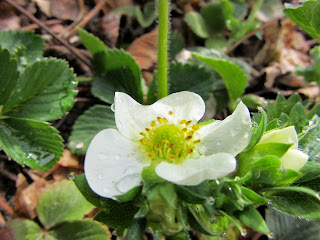 The onions Matt started from seed were not looking great after being transplanted outside.  Things looks so shabby in fact that he had my niece help him plant sets in between each of the spindly green onions.  But, you know, those green onions have really perked up in the last week or two.  They are starting to get some thickness to them now whereas before they just looked like a blade of grass.  I top dressed them with some compost over the weekend.  That should make just about any plant happy.  So, now we're not sure how many onions we'll get out of the deal, but there will be some for sure--and likely some extra green onions to thin out, too. 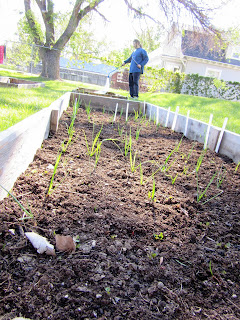 Our garlic is looking to be the best crop we've ever grown.  The stalks are thicker than Matt's thumb and standing up strong.  Practice, practice, practice.  We might get this garlic thing down yet! 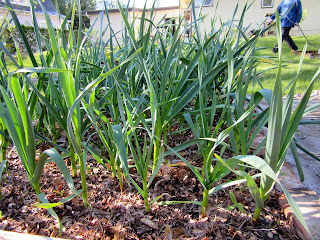 Both plantings of peas have come up--the second not quite as well as the first.  Matt has decided to not trellis them this year and see what happens.  We have the space--its an early crop in a bed that will later be planted with peppers and tomatoes--so its not like we need them to grow vertically.  Matt hopes that this way he can just clear out space as it comes without having to wait to take the whole trellis down before being able to plant out the first warm weather crops.  We shall see. 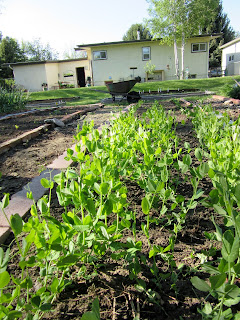 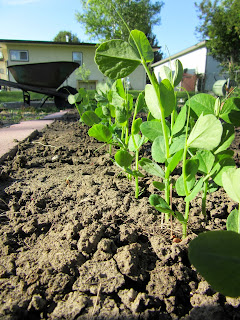 In the back corner bed we've transplanted out the cabbages and cauliflowers.  They look great.  We also direct planted several rows of rutabagas and a whole heck of a lot of bok choy.  The idea of some grilled baby bok choy makes my mouth water just thinking about it! 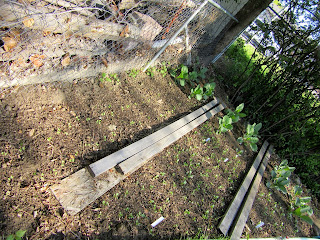 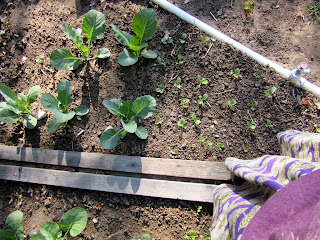 Our plum tree, which had bloomed so lovely a few weeks back, seems to be having some problems.  I think the flowers were zapped in a frost and now the poor tree isn't doing much of anything.  The branches are speckled with dead, brown flowers.  Alas.  The apple and apricot trees are still rocking it though so there is that. 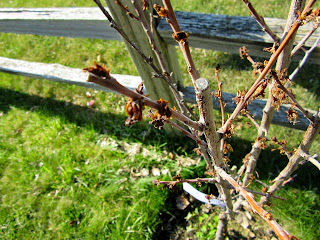 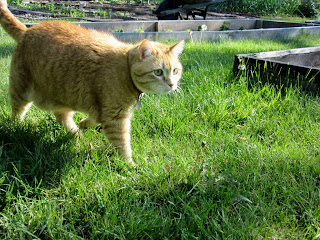 We had such great success avoiding leaf miners on our spinach by using the row cover/low tunnel that we're doing it again this year.  It doesn't look as attractive as an open bed of spinach, but it also doesn't attract pests to ruin my spinach leaves either.  I am happy with the trade off.  We could be thinning it to eat already, but, mostly due to time constraints, have not.  Its got to happen this week though--they're all starting to bump into each other under there. 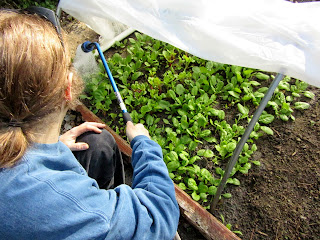 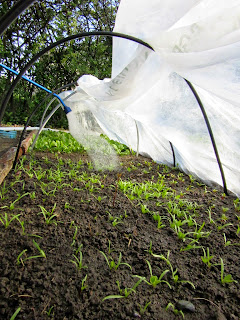 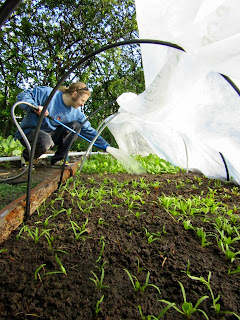 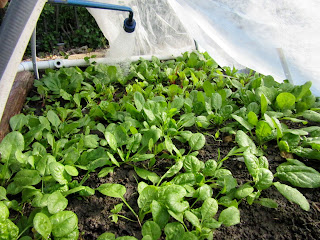 And so it grows. 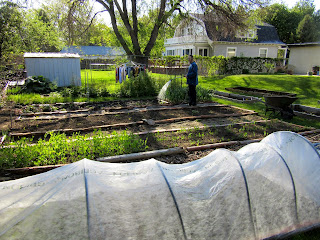