We bought a new canning book last year.  I think we got a gift card somewhere and unsure what to buy ended up choosing this book.  I think it was a good choice.  The book is called the Complete Book of Small Batch Preserving.  I think it has a neat concept because, unlike most other canning books, it deals in rather small amounts of produce, often resulting in just a couple pints of the finished product.  Its a great way to try out new canning recipes without committing 15 pounds or more of produce to it.  The recipes certainly can be scaled up, but they start small.  I think that is great for the home gardener.  Sometimes, like the end of the season, we have a glut all at once.  For much of the year though its more a steady trickle of a few pounds of this and a few pounds of that.  All summer long we made small batches of tomato sauce.  As such, we don't have one massive weekend of canning ahead of us still now like we usually do.  I like it.  It breaks canning up into little, easy bites. 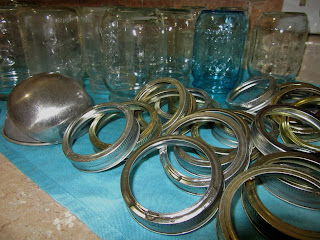 Plus, the Small Batch book has a recipe for a roasted tomato sauce with balsamic vinegar that is worthy of eating plain with a spoon.  Its a small thing, the addition of the balsamic, but oh does it take things to a whole new level of awesome.   After the initial test batch we've since been making quadruple batches.  Its incredible.  Its also incredibly easy. 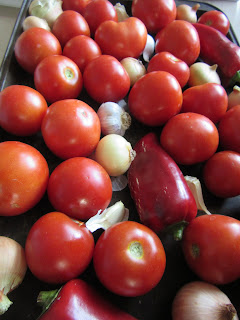 So far we've found it works in any recipe that calls for tomato sauce.  We weren't sure how the balsamic would play out, but it tastes amazing on pizza and pasta, as a base for chili and curries, and, well, just plain!

Below is our scaled-up variation on my current favorite recipe from the collection, but I'd recommend the book as a whole for sure. 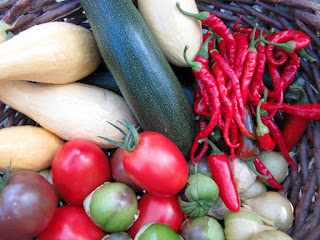 Put the tomatoes, onion, peppers, and garlic in a pan.  A flat baking pan with a lip is great for getting the vegetables all spread out and evenly roasting, but a glass casserole type dish will also work.
Roast for about twenty minutes at 425 degrees F.
Poke the garlic and onions with a knife.  If its soft and the knife goes through pull them out and set aside. If not, roast a while longer checking periodically.
Roast the tomatoes and peppers for about 45 minutes total, until the skins are starting to blacken and juice has been released into the baking pan.
While the tomatoes and peppers are still in the oven remove the onions and garlic from their papery skins.  Since they're all soft and roasted they should squish out quite easily.
When the tomatoes and peppers are nice and roasted puree them up along with the onions and garlic.
Pour the sauce into a sauce pan over medium-high.
Add the salt, sugar, and balsamic vinegar.
Bring the sauce to boil.
Following the directions from Ball, your mom, or another reliable source, prepare and fill canning jars and then process them in a hot water bath.   At our elevation (about 3,100 feet above sea level) we processed pint jars for 40 minutes. 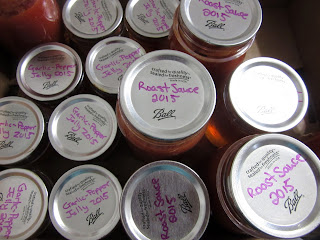 Or skip the canning part and just plan to eat it all up with a spoon.  You might want to... 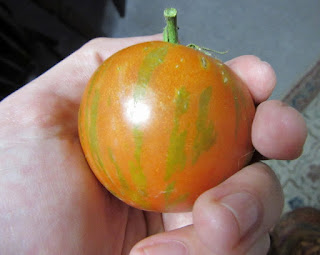 One note:  We don't skin our tomatoes since we have a Vitamix, but with a regular blender it might be better to take a moment to slip the skins off the tomatoes and peppers, too.  Since they're roasted they should slide right off--though be sure they're cool enough to handle first!  The original Small Batch recipe calls for removing all skins.  We did so for the first couple batches, but then realized that with a Vitamix it was probably not necessary.  Testing proved that to be the case so now we just leave the skin on both the peppers and the tomatoes.  The onion and garlic skins we add to our freezer bag for making vegetable stock.
By BLD in MT