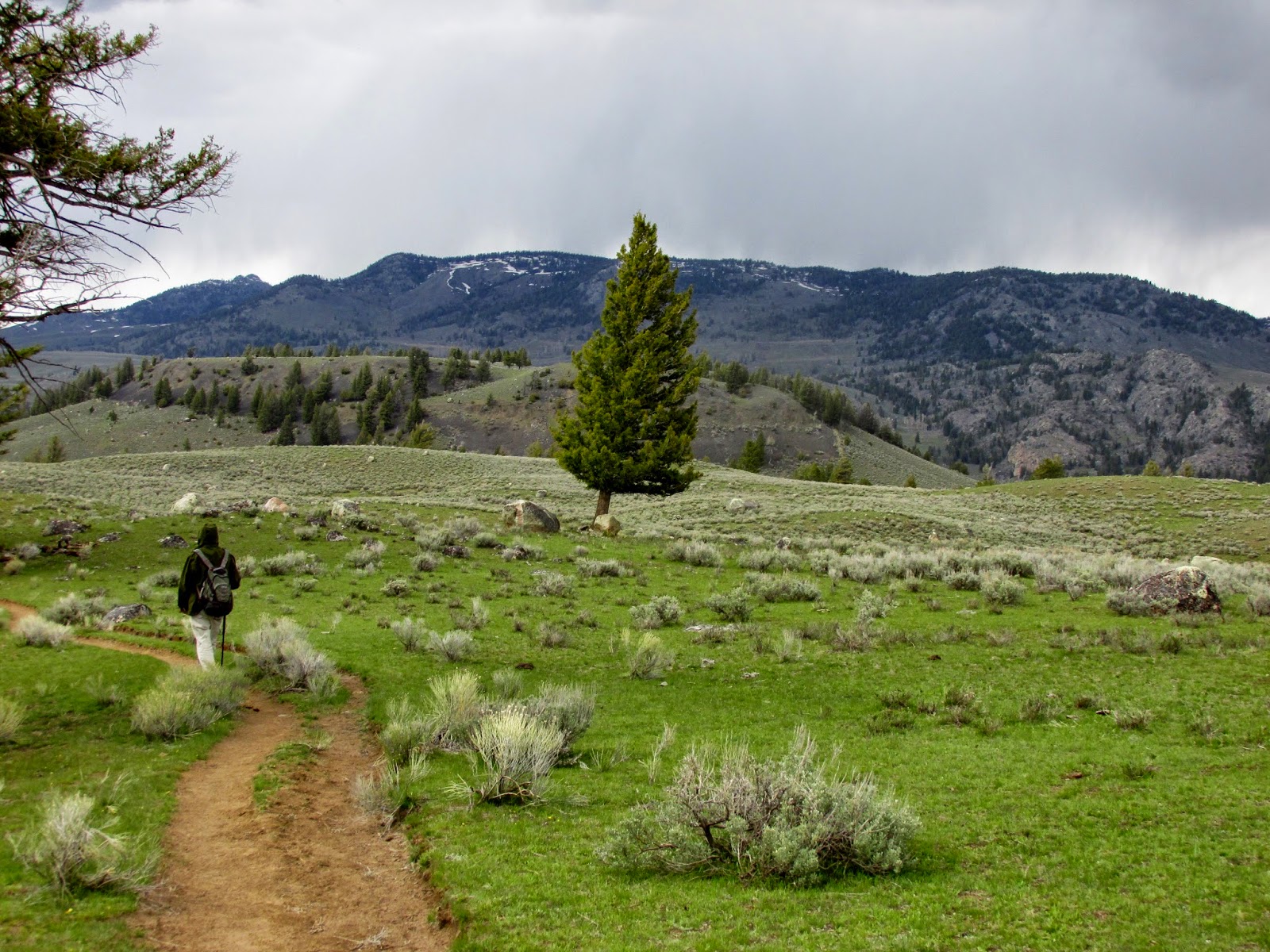 Here is another well overdue hike write up, one that had been kicking around half finished as a "draft" for more than a year.  I am sorting through five years worth of digital photos in the interest of making a Yellowstone Shutterfly album.  I saw these and thought, "That was a good hike.  I should really go back and just finish that post."  So, here we are.
Matt and I had stopped and used the Yellowstone River Picnic Area, about 1.5 miles east of Tower Junction, a handful of times for a lunch spot before we actually took off on the Yellowstone River Picnic Area Trail.  The trail is an easy, but enjoyable one with only about 200 total feet of elevation gain total.  Much of the hike rides right along the rim of the Grand Canyon of the Yellowstone which ups the excitement level, I thought.  What a canyon!  It was a splendid trailside companion.  The view is incredible, but I suppose that someone with a fear of heights would probably find it dreadful.  It was a grey, drizzly May day and this was a perfect hike for it. 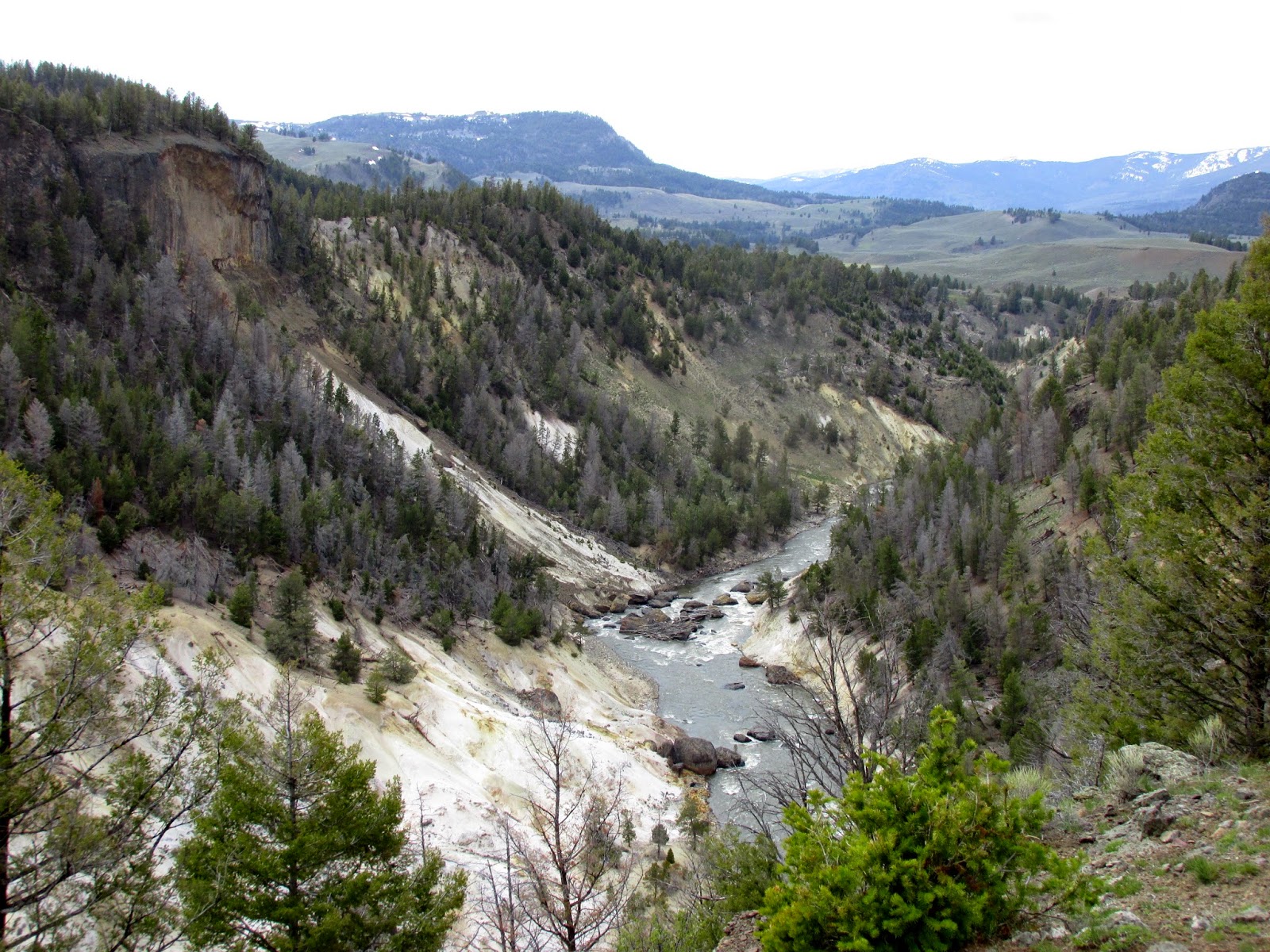 Starting out from the picnic area parking lot the trail picks up almost all the elevation gain straight off, in about the first half mile of the hike--after that its smooth sailing.  The trail follows the natural rise of the grassy hillside climbing up to the rim of the Grand Canyon of the Yellowstone.  It passes through boulder strewn, sage covered expanses with those glorious Absaroka mountains rising up in the distance.  Like the Hellroaring Creek hike the landscape has a glacial legacy with large boulders--erratics--scattered around.  Some were truly huge!
Before long the waters of the Yellowstone made themselves heard and the trail started to follow along the rim of the canyon.  I was so pleased. 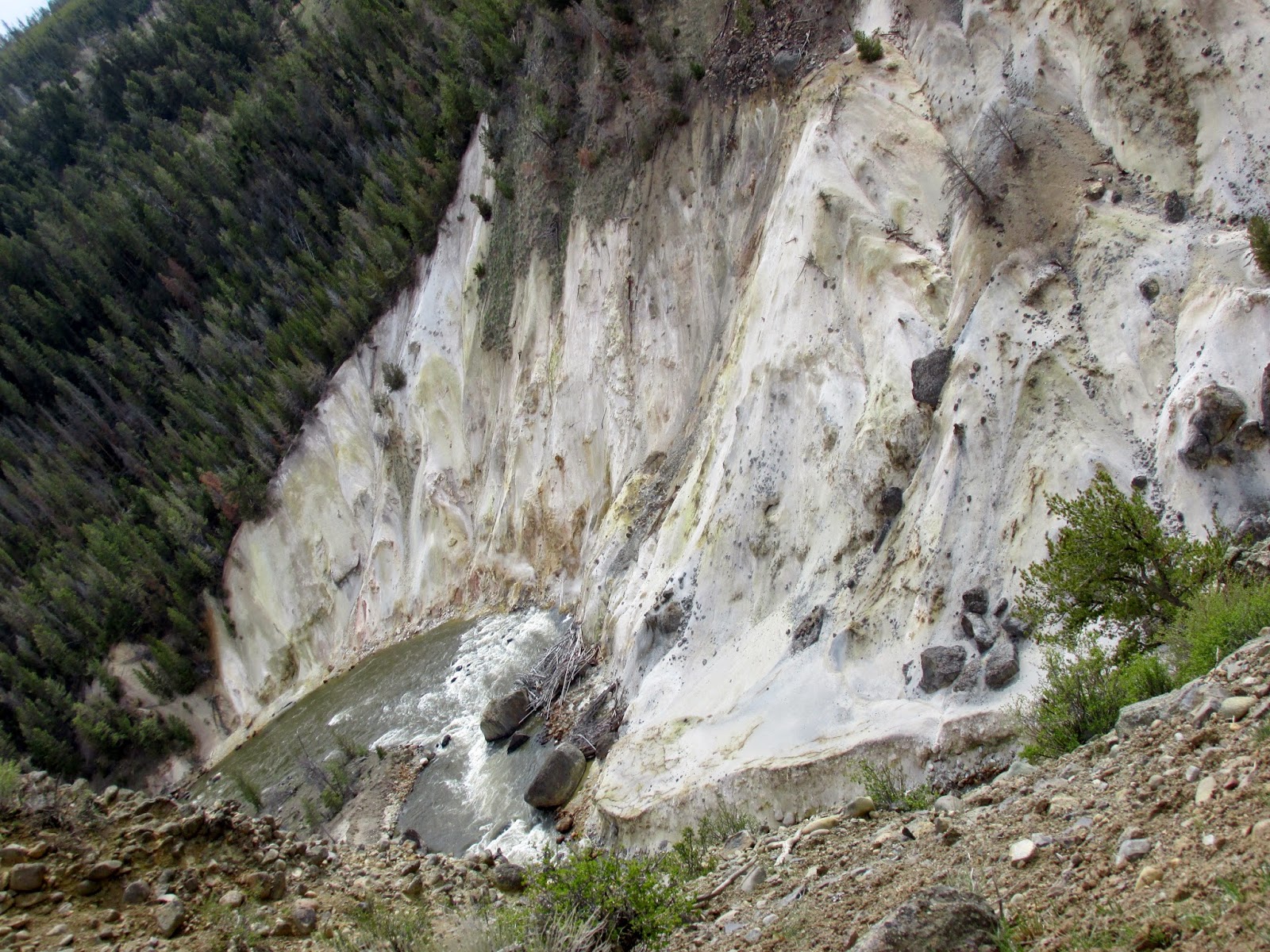 The canyon is, of course, a remarkable illustration of the power of water and time, but the closer I looked the more amazed I became.  While lacking massive waterfalls and not nearly so colorful as the canyon becomes a few miles upriver, the rock formations in this section--known as The Narrows--were incredible.  There were towers of awesomely geometric basalt as well as other rock pillars, overhanging ledges, and deep crevasses.
At about 1.5 miles into the hike we reached a high bluff where we stopped and rested a while, taking in the surrounding views.  They were excellent in every direction.  Mountains in the distance, sage covered hills surrounding, a the winding Yellowstone river running through the canyon below.  We stayed until the rain picked up and then decided to head back.  Walking in the rain is considerably more enjoyable than sitting in it.
We opted to return along the Grand Canyon of the Yellowstone as it was so lovely.  Our guidebook also suggested making a loop of the hike by joining up with the Specimen Ridge Trail.  That involved walking more than half a mile on the highway to get back to the trailhead though.  I generally love loop hikes, but we weren't interested in that when the hike in had been so pleasant.  We were happy to retrace our steps.  The rock formations on the walls of the canyon did indeed look different from this reverse perspective.  We saw new spires we'd not noticed the first go-round. 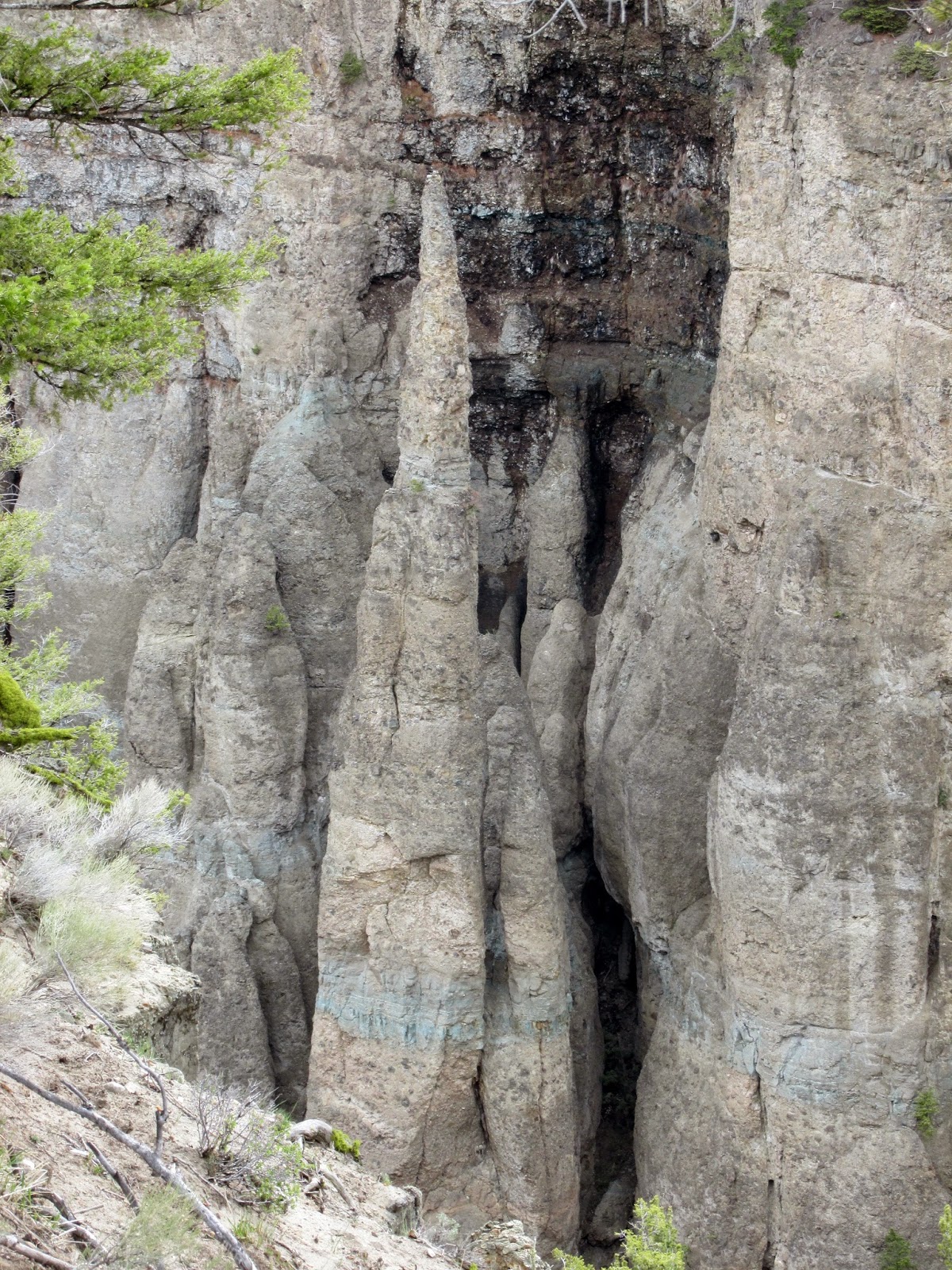 Passing over the rolling hills, as we neared the end of our adventure, we encountered a nursery herd of Bighorn Sheep, one of the lesser known large mammals of Yellowstone.  They were grazing among the sagebrush, oblivious to the drizzle, though occasionally one would lift a head and look around, making sure all was well.  The grasses was starting to shift to green, but the high mountains were still blanketed in snow.  It was a beautiful contrast--and an equally beautiful backdrop to the contented grazers. 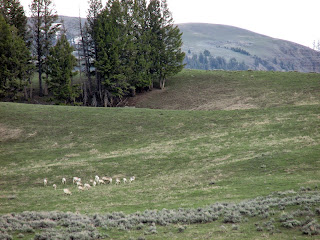 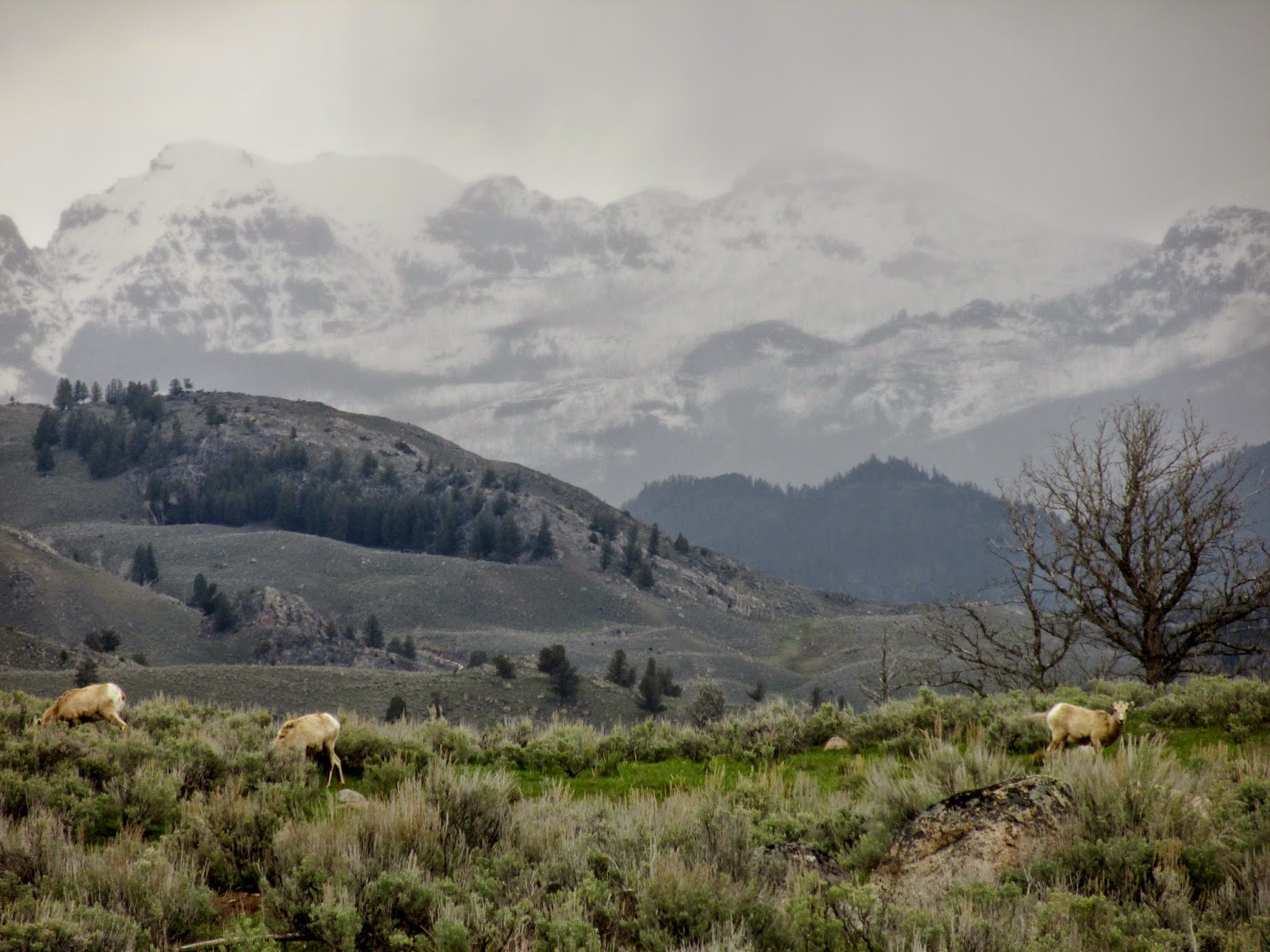 Ain't life grand?  Its amazing that three little miles can hold so much wonder. 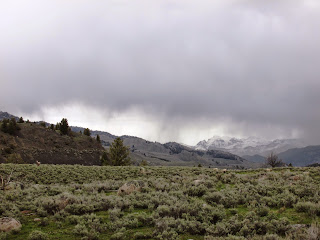