I Can Buy Bread. (But At Least I Have a Month Off.)

Two things happened within the span of a couple hours that led me to draft this post. 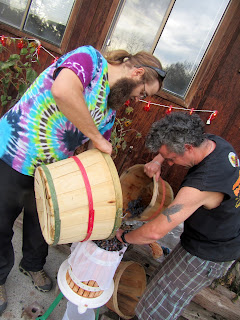 First, an elderly friend of the family was (teasing his wife and) joking with Matt.  "Let me ask you a question, Matt, have you already noticed that you've got fewer and fewer bills with zeros on the end  in your wallet now that you're married?"  We all laughed at that (often true) stereotype about women loving to shop.  As the chuckling faded away Matt went on to say something to the effect of, "Well, no, actually.  Beth is almost crippled when it comes to spending money.  She avoids it if she can."

That was the first thing. 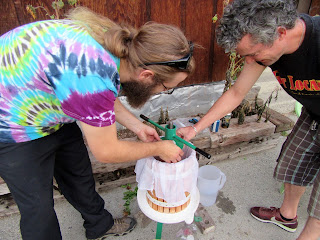 Second, I'd had a hankering for a slice of bread and we'd been months without baking any.  It was a pleasant evening so we took a bicycle ride around and about in an aimless fashion, remarking on the features of the houses we passed, on the beauty of the trees and bushes, etc.  We stopped in at a tiny neighborhood grocery store and Matt waited outside with the bicycles (so we didn't have to bother with locking them up) while I ran in to buy a loaf of bread.  Standing in front of the rather small assortment of fresh breads I was racked with indecision.  The French bread was the cheapest, but it was a bit soggy.  I thought maybe this wouldn't matter since we were toasting it anyways.  But, I also didn't want to buy soggy bread.  They had some nice sourdough loaves, but they were fairly small and twice as much in price.  I considered a roasted garlic boule, but it was the most expensive.  "Argh.  I hate this.  I don't know what to pick," I thought.  So, I just went back out to the bicycle rack and gave Matt all the options.  To my surprise he refused to pick for me, basically telling me it was just bread and I could totally handle it.  More than that it seemed he was saying that I should pick it so as to not let the, oh, fear of buying stuff totally take over.

And that was an eye-opening back to back set of experiences for me.  In fact, I almost started to cry (just a tiny bit) as I went back in to select a loaf.  It was a tad ridiculous.  I had no idea I'd let things get to this point. 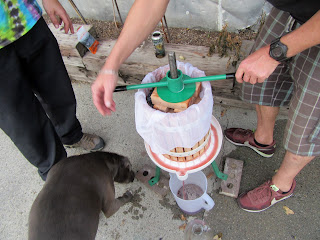 I knew I was frugal.  I knew I didn't like to go shopping.  But, bread?  I couldn't even make myself buy a loaf of bread for $3.99?!  That seemed absurd even to me, when I stopped to think about it later.  And yet, I'd gone back out to have Matt make the choice for me.  (Actually, I told him he should just go in and buy it and I'd wait with the bikes, which was another factor in his refusal, I think.)

Our consumer culture is not a good thing.  We buy too much junk (both food and objects) which we don't need to fill our lives and days in a way that, in general, depletes us rather than fulfills us.  We under-value our finite, precious natural resources used to produce, package, and transport all these things we buy.  It makes me sad to see all the waste and shameless, almost non-stop consumption. 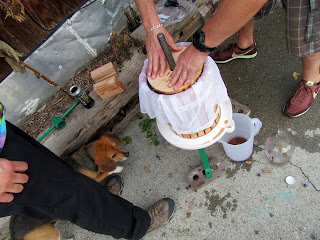 Still.  I know I should be able to make such simple decisions as in the case of this bread thing.  It's not like I was trying to decide which new big screen TV to buy or something.  As much as I like to be self-reliant I will always need to procure things outside of my home--to spend money!  I can't grow enough wheat in my little ol' backyard, say, to keep us in flour.  There isn't a way to gather salt locally.  I do not own any cotton fields or a spinning wheel.  And so on. 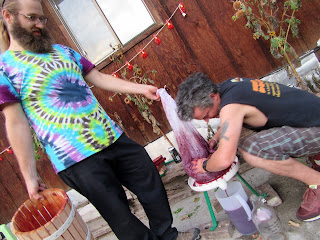 So, I've been trying to carry money in my wallet.  I've made some independent purchasing decisions--little stuff, like bread.  But, I still don't like spending money.  Being aware of this propensity has helped, but I still prefer Matt to do the shopping--grocery or otherwise.  I am much better at bartering, I've realized.  Actually having to fork over cash money is still harder for me.  I cannot bring myself to completely break with the notion that this is a good thing.

Which brings me to today--November 1st--the launch of No-Shop-November 2016.  Matt refilled our containers of oil, flour, and salt over the past week in preparation.  He bought toilet paper and tofu.  This year we're keeping a beer and ticket allowance for concert/event nights out and a gas allowance for the car, but we're otherwise hoping to do no spending whatsoever.  Not just food, as in past years, but no shopping.  Period.  I look forward to it immensely in my twisted, anti-consumer way.