This was something fun and new for me.  Instead of another book to review for Blogging For Books I was able to choose a new game to review.  What a swell turn of events!!  I love games.

There were two games to choose from, actually, but of course, I went with the word game.  Word games almost always rank at the top for me.
Rewordable came about following a highly successful Kickstarter campaign.  The game is card based with each player creating a set of words in front of them.

It had a couple things that stand out as particularly amusing components and which make it a unique take on a word game.

Players can steal words from each other.  You don't have to, but you can.

The value assigned to the word segments is based on their actual frequency in common speech.  Which means, in theory, that is is easier to make high point words.  Whereas in Scrabble the high points are assigned to the J and X, say, that isn't the case in Rewordable....which is an interesting twist.  As a frequent Scrabble player this is actually a little extra challenge, I think.

You can change the words as you go.  If new cards you draw build on your word (or an opponent's word) you can make CHAT into CHATTER into CHATTERING.  This sort of piggybacking is pretty much my favorite thing to do in Scrabble and Rewordable is just made for it. 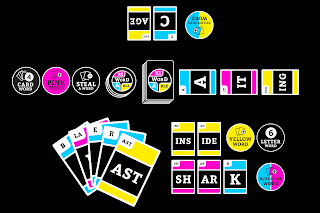 The cards are attractive in a bright and bold sort of way.  The whole game is rather small making it highly portable.  The instructions were direct and well written.  At only one point were we uncertain (it was the common-pool cards) after reading them, but it became immediately clear once we started playing.  That is so often the case with new games.

The first game was a little slower as we got used to building words from the fragments on each card.  Some word fragments are certainly easier than others--and the point values seem to change accordingly.  But, then we played several games in a row, once we got the swing of it.  All three initial testers gave it very good marks.

Rewordable is designed for two to eight people.  I like a game that can scale up like that, but which is still enjoyable with only a few.  Most of the time it is just Matt and me playing, but I do love a rowdy game night with my friends, too.  Matt and I are glad to have this new addition to our game-playing repertoire. 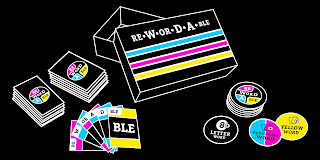 Disclaimer:  I got a copy of this book for free through the Blogging for Books program.  The review and opinions here are my own and were not influenced by that fact.
By BLD in MT