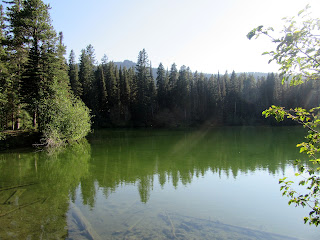 I mentioned that we'd gone backpacking back in July.  When I'd been scouting online for places to go in the Bozeman area I only found some pretty bare bones info about Bear Lakes.  So, with that in mind I though I'd write up a little something about it.  Not only will it will help me remember the experience better but, hey, maybe some other hiker will find it helpful, too. 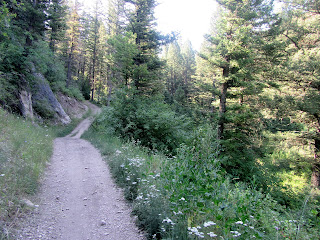 The hike to Bear Lakes was a steady upward climb of about 4.5-5 miles.  There was only one bit that was steep enough to necessitate switchbacks, but it was up, up, up pretty much the entire way.  The consolation to this is that the hike back out was gravy.  What a sweet downhill cruise that was! 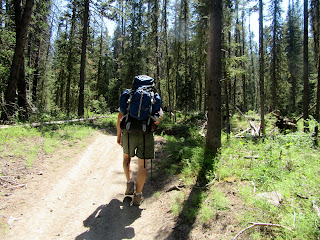 The trailhead is located at the end of Bear Canyon, right outside of the city of Bozeman, MT.  This close proximity to town, as well as the fact the trail is multi-use (bicycles, ATVs, horses, and hikers), gave us some reservations about the hike, but in the end it was just fine.  We didn't expect it to be wilderness--and it wasn't--so we were satisfied.  Yellowstone has taught us to be more open minded about "sharing" our lovely natural places. 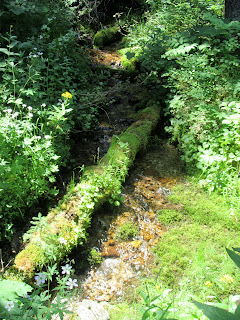 And we did share the trail with bicyclists and a handful of dirt bikes and four-wheelers, but again, it all worked out well.  We shared.  The bicyclists were kind of cool even.  There was a race going on and so they were just flying downhill, catching air on the small dips and rises of the trail...it was nuts.  They were hooting and hollering and clearly having a great time.  Just like me and Matt.  The trail was wide enough though and we could see them coming so it was never an issue to share the trail with them.  And the motorized vehicles were there and gone, only causing 45 seconds of their noisy disturbance. 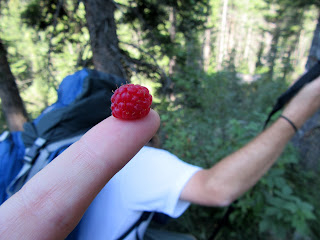 We picked wild raspberries along the trail and enjoyed the flowers--including quite a few Pinedrops, those odd parasitic plants that don't make their own chlorophyll.  Matt and I have been fascinated by them since we ran into an Indian-Pipe back in 2006, wandering the woods with Adam.   The flowers were quite lovely--paintbrushes, lupines, blanketflowers.  No birds along the trail really, but with the relatively heavy use of the trail we weren't too surprised. 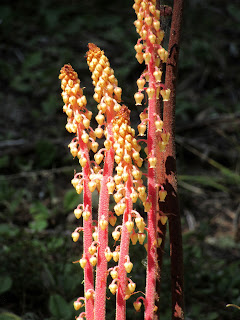 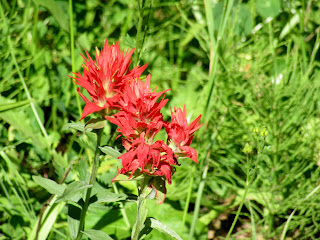 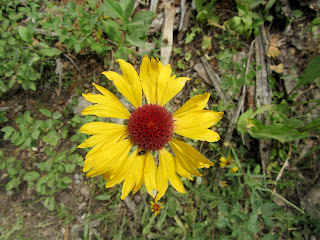 After passing the smaller and scummier of the Bear Lakes.... 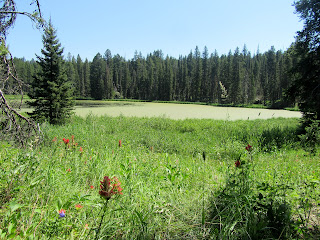 ...we arrived at our destination. 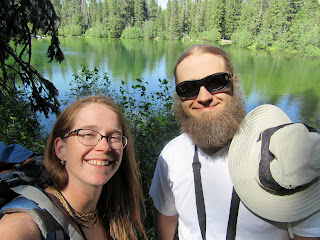 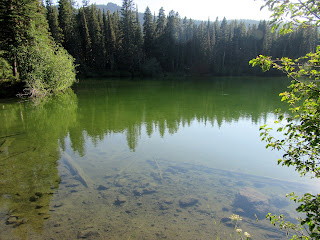 The larger lake was in rather distinct contrast to its fauna covered neighbor.  The lake glimmered emerald, but the water remained strikingly clear.  We could see fish swimming well out from the shore. 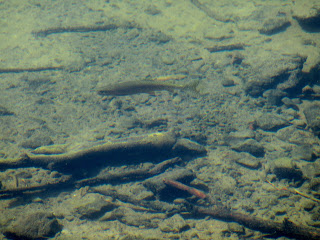 We climbed a small rise overlooking the larger of the Bear Lakes and set up camp back in the forest away, for privacy.  The lake was a popular place to be during the daylight hours.  Folks fishing mostly.  We hiked around the lake and hung out hammocks, spending the afternoon lunching, reading, and chatting.  We could see other people, but were in our own little secluded thicket of trees.  The occasional ATV traffic thinned as the day went on.  The fishers went home.  In time it was just us. 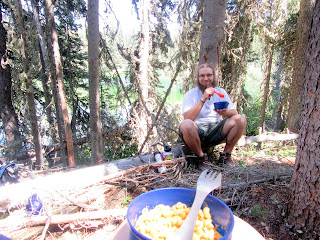 We tried out some sparkling wine in a can--a new product for sale at Matt's work--and enjoyed our view of the lake below.

Come night it was so still and silent it was baffling.  No wind rustling the trees.  No insects singing, even.  There was one other couple camped out at the lake--arriving on their ATV shortly before dusk--but we had enough space between us that we never heard a peep from them, even with the dead quiet. 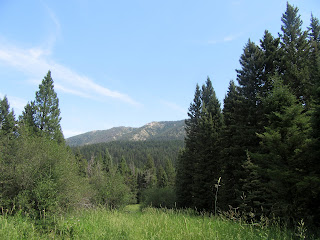 We'd intended to stay up and do some star gazing, but after five miles of up, up, up with a full pack and bodies not conditioned to such use we were too tuckered.   Which was interesting since we can easily do 10 miles in a day hike.  Carrying everything--gear, food, wine--really makes a difference.  So after a game of Scrabble we called it an early night.  We left the rainfly off as a compromise, so we could still watch the stars twinkle at least a little bit. 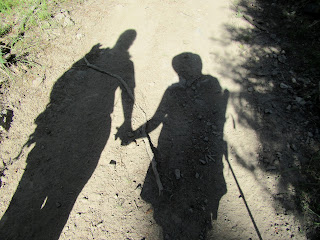 We both woke in the night and drank in the sky.  And the quietude.  It was perfect. 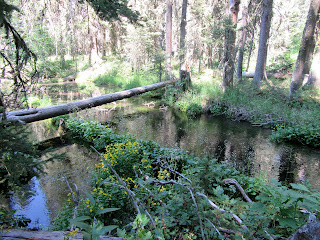 The next morning we lounged on the small bridge by the lake--reading, snacking, basking.  We found the nest of a busy mama Robin and watched her go about her business.  Those mama birds really have their work cut out for them.  All mamas, I suppose. 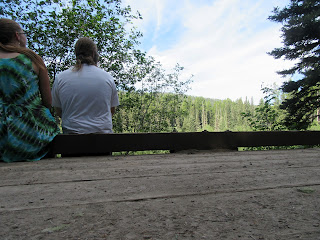 As already mentioned, the return trip was a breeze.  The packs were lighter, too.  Though the trail was much, much quieter in the morning hours we still saw few birds.  That was compensated by the crazy number of frogs we encountered though.  They were all over in the pools of water along the trail. 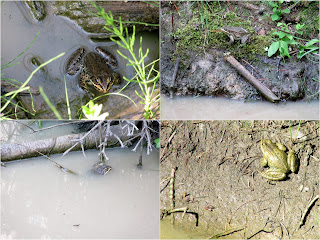 There was also an abundance of butterflies dancing from flower to flower down the trail.  They came in quite a number of colors, patterns, and sizes.  With all the flowers, butterflies, and the sweet mountain air it felt more like spring than smack dab in the middle of summer. 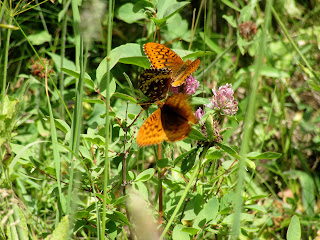 When we made it back to the car we were happy, refreshed and tired at the same time, and super excited to find backpacking just as awesome as we'd remembered it to be.  Even if we didn't go far afield.  Even if it was just one night. 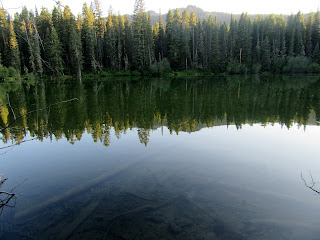