I had the chance to try my hand at pysanky/pysanka egg dying last week.

Matt's mom had suggested it as an Easter activity--which would have been more appropriate timewise--but we got carried away eating, playing games, telling stories, etc and it didn't materialize that day.  Still, I was keen to try it and figured better late than not at all.  I haven't seen many in person, but those pysanky eggs look so dang cool! 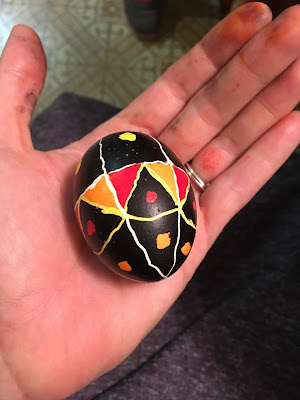 Sharon had made them at least once before--many years back--but it was a totally new skill for Matt and me.  Years ago I bought an elaborately patterned orange egg on a total impulse at a craft fair.  I had no idea how it was made at the time, but knew it sure looked radical.  The really good ones remind me of stained glass and mandalas. 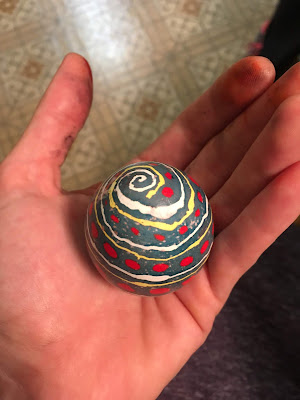 And may I just say:  What a crazy artistic process!  Each egg is SO many layers of dye and wax.  It was like regular Easter egg dying on steroids, in the best way possible.  I had to marvel that some clever Ukrainian had thought of it oh so many generations ago.  As I do with so many, many things. 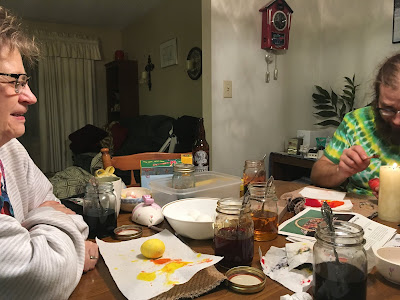 As a kid I used crayons to draw patterns on Easter eggs before dying them.  The waxy crayon layer would prevent the dye from reaching the egg's surface.  This is the same premise in pysanky.  There is a little more finesse, strategy, and skill involved though. 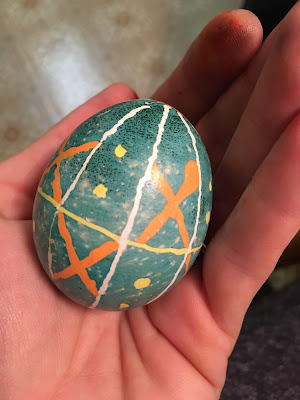 There is a special wax-applying doodad called a kistka--essentially a tiny metal funnel on a stick--used to create the designs between dye layers for an intricate and multicolored affect.  The funnel is heated and then wax scooped into it.  The wax is warmed by the heated metal and slowly dribbles out the small end of the funnel so you can draw on the surface of the egg.  It took a bit of practice to achieve consistency in wax depth, width, and placement.  All three of us felt like we learned a lot as we went and would probably make even better designs next time.  It was hard to visualize the end result until we'd dyed several layers first. 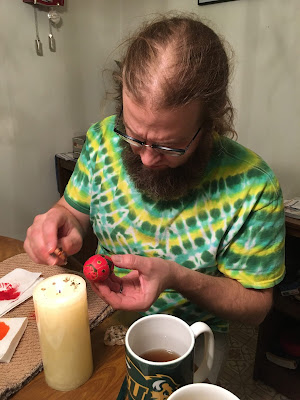 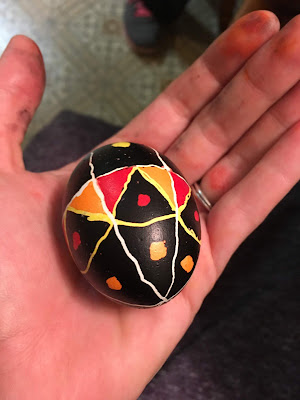 It is insane.  The fact that the egg changed so dramatically between layers was wild.  That is what made it challenging for me to conceptualize how the process worked and how the different layers built on one another.  The final design can't be revealed until the very, very end when the egg is heated all over to remove the wax.   It was like Christmas, that reveal--what's it going to look like?!?!?  Will it look like what I'd been picturing in my head?!?!  [It didn't, by the way.] 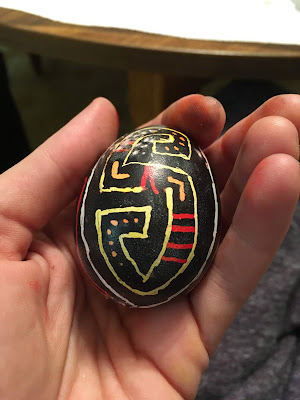 I immediately want to try it again though I am also conflicted about this very non-vegan art form.  Matt's folks ate the eggs--and are not vegan and so would have eaten eggs regardless--but still...  I feel conflicted.  I saw my pal Hannah this weekend and, since I'd already raved to her about the pysanky fun, she brought me six brown eggs from the happy hens at the small farm where she works.  I feel better knowing that these are birds that get to go outside and wander under the Big Sky and who are given special love and attention from Hannah.  Hopefully that will allow me to dabble a little bit more without feeling too bad about it.
Next Easter is going to be off the hook with beautiful, jeweled eggs though.  We've made a loose game plan about that already.  I even added a note to my calendar so we don't forget or let time get away from us.  I love seasonal traditions and heritage crafts and holidays.  This seems like a fun annual pastime to adopt.  We gotta get/make us some more of those kistkas though.  It was slow going sharing one between the three of us.  Worth the wait though for such an improbable craft. 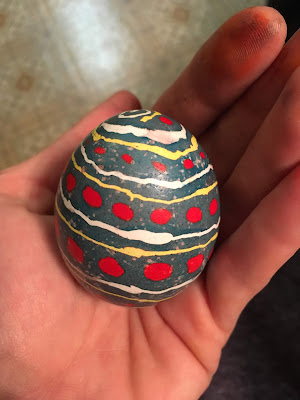