I dropped Ginger off at the vet this morning.  She's having a tooth (or two) pulled, poor girl.  I wish I could explain it to her.  I felt retched leaving her there.  I cried, even though I'd given myself a peptalk about not crying at the vet's.  Again. 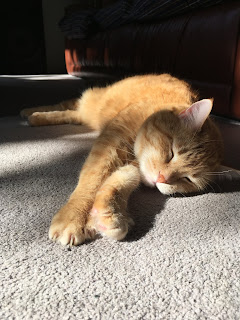 It isn't even like I think she will die or anything will go wrong, though I won't lie and pretend those extreme, worst-case scenarios haven't crossed my mind.  Even assuming everything goes perfectly though I still get all worked up.  Thinking about her being totally anesthetized is agony to me.  Thinking about her being in pain, getting stitches, about not being there for her, about her confusion....it just hurts my (sensitive, cat-loving) heart. 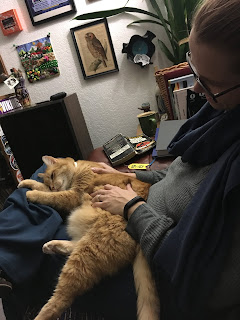 Because I adore that cat.  She is an angel and the love we share is precious to me beyond all reason.  We worship each other unabashedly. 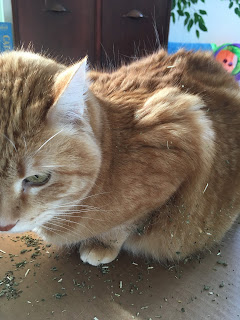 While she has gained confidence since living with us she is still my sweet, shy, scardy cat.  The one who taught Matt that "scardy cat" as an expression is based in a reality of feline behavior.  She is the one who beelines for the basement or under the bed when the doorbell rings, who comes to me when the thunder claps.  The one to whom we had to prove ourselves (in contrast to Johnny who immediately loved us and was right at home).  Ginger took almost a year to come around when Johnny moved in--and still occasionally has to show JD who is boss.  She's kind of a prissy little Queen Bee.   But she is our Queen Bee and we're going to miss her tonight in the bedtime cuddle puddle. 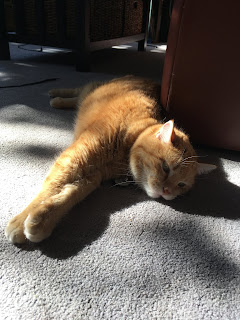 She is exceedingly leery of dogs, loud noises, new places, strange people, weird smells, other cats.  It was like dropping her off for the worst slumber party ever.  I hated it. 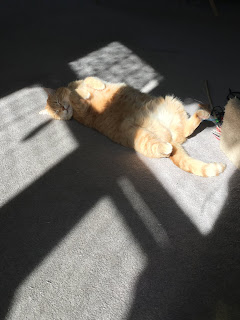 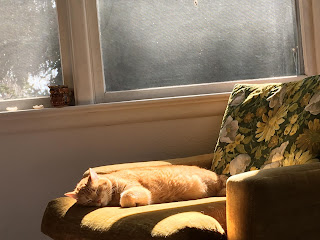 And yet 10am tomorrow--when I can pick her up again--can't come soon enough.  I only hope her mouth feels better fast and that she forgives me just as readily.  I took tomorrow off so I could dote on her and butter her up all day.

Poor sweet GingerBaby.
Footnote:  Ginger had to fast in advance of her appointment--8pm for food, midnight for water.  This meant fasting Johnny, too.  They were reeeeeeeeeeeeeeeeeeal impressed with us this morning, it goes without saying.  I am surprised Johnny didn't wake Matt up in the middle of the night, "Say, friend...did you know that someone took the food bowls away.  I figured you didn't so...."  They both shot daggers at us when we didn't give them breakfast immediately.  Girls after my own heart, they're very food oriented and routine driven.
By BLD in MT