Matt and I don't eat out.  Its not really a vegan thing, its a cheapskate thing.  Seriously, every time I eat out I look at the prices and am aghast.  I realize that its about more than the food though.  Its the experience and luxury...and not having to do dishes.  But, still, I think its crazy.  Or maybe I should say, I am just too frugal and I know how to cook so dining out is not for me.  Maybe if a person knew nothing about cooking great food it would have more appeal to just let someone else make it.  I sometimes forget that a lot of people don't really know how to cook.  Also, while there is usually some vegan option at most restaurants, eating out in Billings is just less fun, regardless of the price, for us because of that.

But, twice we were asked if we would go out to some nice vegan restaurant while we were in Denver over the weekend.  We said no both time because in all the years we've been traveling to big cities with vegan restaurants we never have--going back to that cheapskate thing again.  We always pack our own food.  It just easier.

But, the idea was planted and I had just been to a vegan restaurant with my sister in December and thus the awesomeness of the experience was still fresh in my mind.  So when Matt expressed interest in the idea I fully encouraged it.   A little google search informed us that a highly reviewed veg resturant was less than a mile from our hotel.  So we went.

Oh.  My.  Goodness.  Watercourse Foods, what a heavenly restaurant.

I enjoyed the warm, bright atmosphere.  They had very amusing animal themed art or animals doing human things like a bison sitting under a tree with a cup of tea.  And the food was phenomenal.

It took us like 20 minutes of pouring over the menu to figure out what to get.  It'd been more than seven years since we had to sit down and make such hard decisions!  Its so much different than going to a resturant where there are one or two vegan friendly choices. 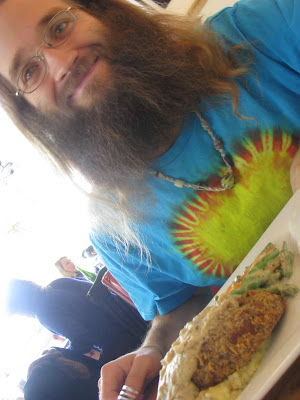 Matt got chicken-fried seitan (which was huge, crunchy, and fabulous...and I don't usually even like seitan much), with mashed potatoes, and green bean casserole (which was made with fresh, beautiful beans) covered in country gravy.

I got a dish called Amsterdam Hash with was grilled vegetables and scrambled tofu served over chunky fried breakfast potatoes and topped with gravy (man, oh, man was that good gravy). 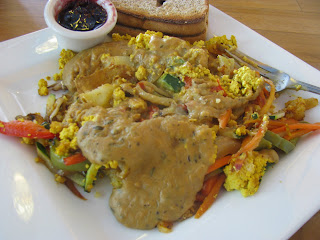 Then we split a freshly made raspberry milkshake. 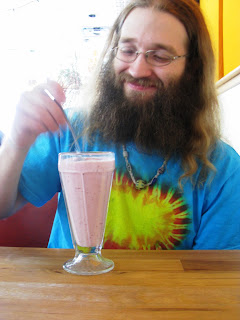 We'd talked about getting something from their dessert case, but we were just too full.

We tried to stop again for breakfast on our way out of town, but alas, they only serve breakfast Friday through Sunday and so they weren't open yet and we went home empty handed, or stomached, as it were.

I think this might be something to look forward to on future journeys though as we both raved about it for the entire day.  And into the next, for that matter. 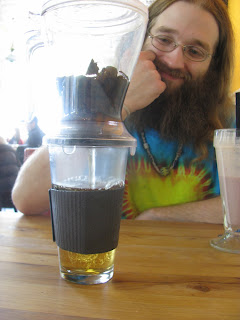