So, you may remember my enthusiasm for the food we had at Watercourse Foods resturant in Denver, CO earlier this year.  One of my dear readers, Cristy, suggested I look around online to see if I could replicate any of the scrumptious fare we had there.  What a great idea!  So I did some sleuthing and found a good number of Watercourse Knock-Offs to try out.

So on Monday night we made a take on the Biscuits and Tempeh Gravy they've got on the breakfast menu down at Watercourse.  I've never eaten it at the actual resturant...so I don't know how the recipe stacks up to the real deal....but, my oh my, was it superb.  So who cares if its like the restaurant.  It was fabulous.

I tweaked the recipe found here. 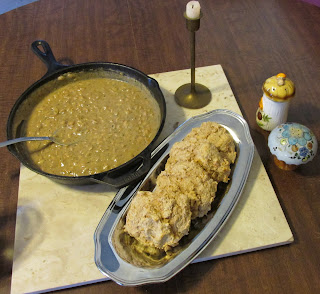 The biscuits have shredded carrot in them!  I'd have never thought of that in a million years, but its pretty genius, I think.  It makes them quite moist and adds a nice touch of color to them.   The gravy is a bit more savory and more spicy than our standard biscuits and gravy recipe.   But, then again, our standard recipe doesn't call for hot sauce!

I think I know what I'm going to try next time I have the opportunity to go to Watercourse! 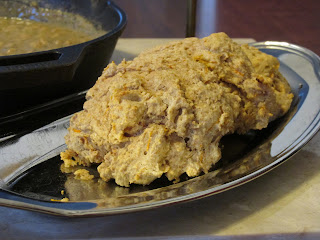 Preheat oven to 350° F.
In a measuring cup, whisk the apple cider vinegar into the soy milk.  Let it sit and curdle a few minutes.
In a medium mixing bowl, combine the flour, baking powder, and salt.
Cut the shortening into the flour mixture.
Pour in the curdled milk and applesauce, and fold together.
Fold in the grated carrot.
Drop by heaping quarter-cupfuls onto a baking sheet or stone.
Bake for 20 minutes, until lightly golden.

Crumble the tempeh into a medium saucepan.  Cover most of the way with water.
Mix in soy sauce and hot sauce.
Simmer over medium-high heat until dry, but be careful to not burn it.
Turn the heat down to medium.  Add the olive oil to the pan.
Fry the tempeh until it's lightly browned.
Add the garlic, fennel, oregano, thyme, sage, and red pepper.  Cook until fragrant and lightly browned.
Add the veg broth, and use it to deglaze any sticky bits (fond) from the bottom of the pan.
Stir in the milk and nutritional yeast.
Bring to a simmer.
Whisk the flour into water then add slowly into the gravy while whisking until it gets to a consistency you enjoy—thick, but pourable.
Add salt and pepper to taste, much more pepper than salt. 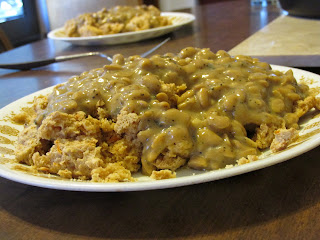