We planted seven hill of summer squash last year.  Seven.  For the two of us.  Turns out...that is a lot of summer squash!  See, we'd never had any luck with zucchini the couple of times we tried to grow it so we overcompensated a bit, I guess you could say.  Just a bit.

As such we spent much of the late summer and fall compelled to come up with meals that could accommodate large quantities of summer squash.  One of them, which we were quite pleased with, was scalloped zucchini.  We made it just like we would scalloped potatoes, but with summer squash instead. 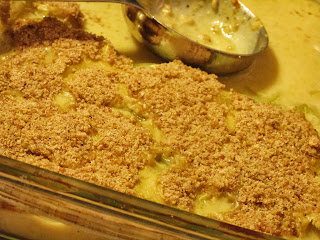 It was so very, very tender and creamy.  It sort of felt like it was melting in my mouth.
The recipe came about by accident, too, which delights me.  I think accidents are probably responsible for a lot of great new ideas.  Matt was planning to shred up a large zucchini to freeze for use in zucchini bread at a later date.  But, he accidentally inserted the blade wrong way in the food processor resulting in thinly sliced rounds of zucchini.  But, then he thought maybe that was an idea worth looking into--scalloped zucchini!

Combine the oil and flour in a saucepan making a roux.
Add in milk, pepper, garlic powder, herbs, paprika, and red pepper flakes and stir well.
Add in nutritional yeast and stir until thickened into a creamy, sort of cheesy looking sauce.
Pour a little of the sauce into the bottom of a baking pan.
Layer slices of zucchini so that they overlap, occasionally adding some sauce between layers.
Finish with a layer of sauce on top.
Sprinkle bread crumbs to cover the whole dish.
Bake at 375 degrees F until zucchini can be easily pierced with a fork.

We've only got one fresh, great big, humdinger of a zucchini left to use up.  Of course, there is loads of shredded zucchini in the freezer still.
By BLD in MT