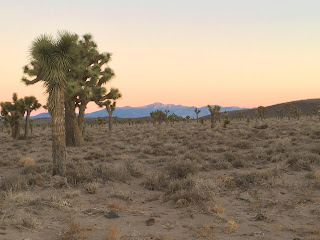 Experiencing the Joshua Tree forest was, for me, a huge highlight of our recent Death Valley megavacation. 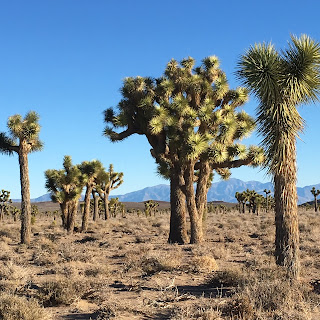 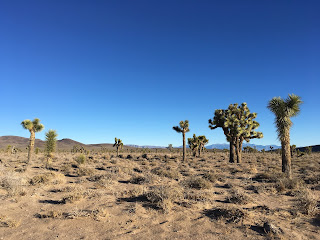 When Matt said, "What if we went to Death Valley in January?" I didn't really know anything Death Valley.  I mean the name itself conjured up some barren, desolate, parched and sandy mental landscapes--mostly derived from old Roadrunner cartoons and images of the Sahara filed away in my mind, I'd bet.  I knew it had a really low spot, but wouldn't have been able to say if it was the lowest in the US, or North America, or what.  [The answer is:  It is the lowest point in the western hemisphere.]  Since I had such a blank slate I thought I'd endeavor to keep it that way. 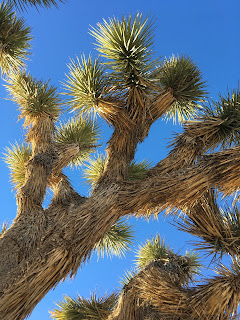 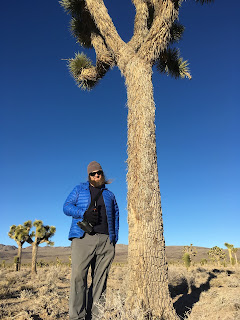 I was thinking about how different the traveling experience must have been in generations past.  To be surprised by nature as you encountered it with your own eyes, rather than through Planet Earth videos and dazzling Instagram photos.  I mean, people coming to Yellowstone today know what to expect (even if the real deal is always better).  We have abundant access to photos and videos of Old Faithful erupting, bison trotting, elk bugling, Grand Prismatic being dazzling, and on and on.  This is largely true of most places people visit.  I know that I, for one,  Google-Earthed Cabo San Lucas before I went last year.  "Ooooh, that rock arch looks neat, we should try to see that."  We arrive on the scene with visual and experiential expectations unparalleled by earlier generations of tourists. 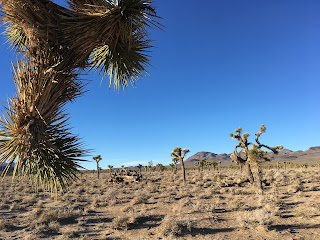 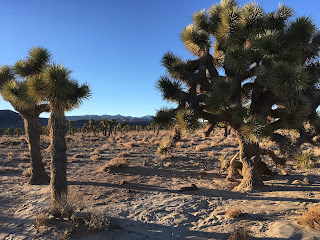 So, I thought it was pretty unique in this digital day and age that I didn't know what Death Valley would look or feel like.  I thought that was cool.  I wanted to cultivate that void of knowledge just long enough that the Universe could floor me in person, just like the old days.  "Oh!  So THIS is Death Valley!  THIS right in front of me!  The sand in my boots and the wind in my hair!  What a world!"  Like I said, photos never do nature justice anyways.  Matt is our trip planner so he had some ideas for hikes and sites to see and places to camp.  I was perfectly at my ease to remain in the dark until we got there. 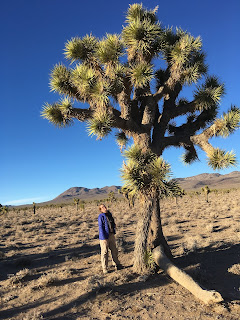 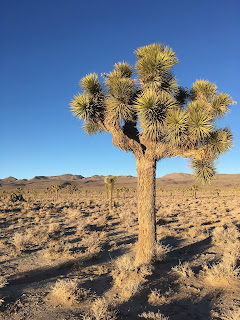 And I never would have expected a Joshua Tree forest.  Never. 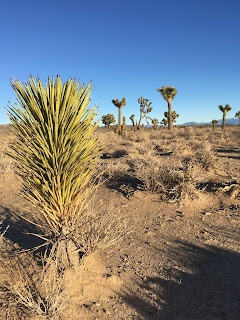 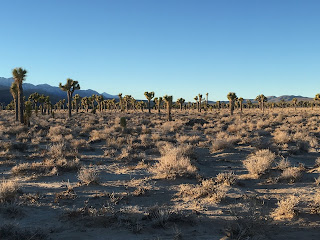 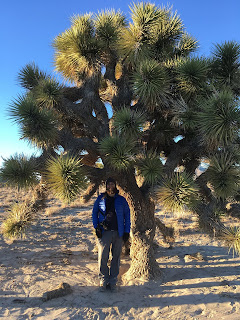 Joshua Trees are from the lily family and are related to yuccas.  They are each one of-a-kind creatures--so uncommon and special, demonstrating individual personalities in the configuration of their bushy, pointy branches.  They reminded us of saguaros in that regard.  Their uniqueness shines like a beacon.  Matt and I took a sunset stroll in the trees pointing out favorite specimens to each other.  "Ooooh, look at that ginormous one!  Awww, what a cute little guy over there.  And that one is all droopy!  Do you see the branch that looked like a bird face?" 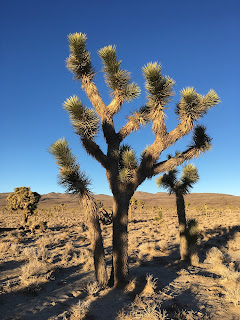 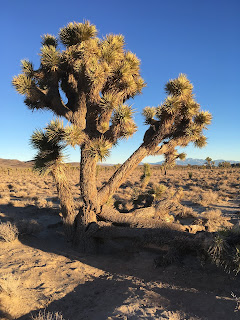 Such distinctive, outstanding personalities.  If you want to say that about a tree.  Which I do. 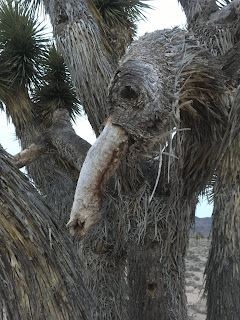 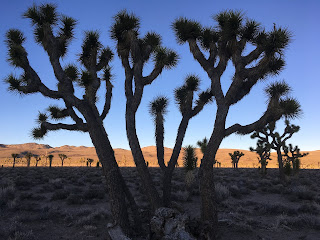 Like the Saguaros the Joshua Trees were fascinating in all stage of life.  They begin the journey up to the sun as a bushy little shrub that truly does look reminiscent of a yucca.  As it matures the trunk is revealed, fronds growing ever higher toward that scorching desert sun.  If conditions are right they become true trees with huggable trunks and very unusual configurations of branches extending overhead.  The burros clearly hang in the shade cast by these pointy umbrellas, too, based on all the droppings.  The largest--and presumably oldest--Joshua Tree we saw was so substantial it would have taken both of us to encircle the trunk with our arms.  When the Joshua Trees die they slowly peel apart revealing their inner workings which are almost as remarkable as the living version.  They droop and eventually fall to the earth to decay ever so slowly in the dry conditions.  Life forms that have adapted to the desert so brilliantly are just astonishing to me.  So dry, so cold, so windy, so hot in a perpetual cycle.  Over and over and over again.   What a world! 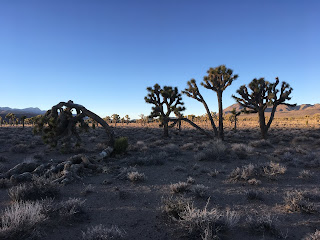 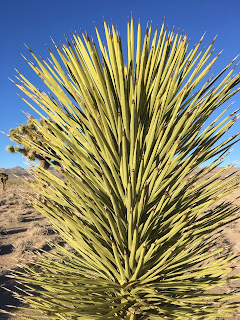 A dead fallen Joshua Tree makes a lovely bench though, just like any other fallen tree in the forest.  We sat and watched the sunset recede away from us toward the distant mountains. 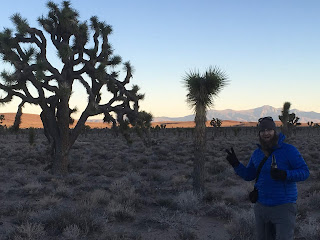 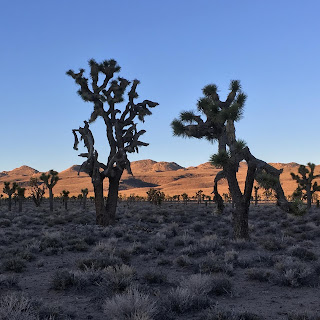 It was the coldest night of our trip, that night in the backcountry with the Joshua Trees.  We actually felt this coming as we ate dinner in the deepening twilight and so we rearranged things to permit our sleeping in the back of our (rented) SUV instead of pitching the tent.  The water in our partial gallon jug outside froze overnight.  The windows were layered with frost.  Matt did sleep poorly being about two inches too tall for the sleeping arrangements, but otherwise we were very keen on the idea.  We went to bed early and rose early to a thickly grey and overcast morning. 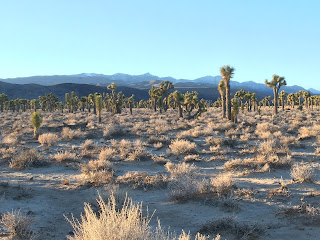 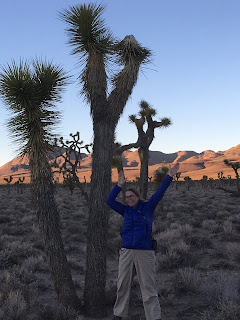 The trees, like so many natural wonders, really looked their best in stronger light.  Even still, they were impressive company.  We followed a burro trail through the forest until we stumbled upon an antique garbage dump where we poked around a while.  It was pretty interesting, you know, for garbage. 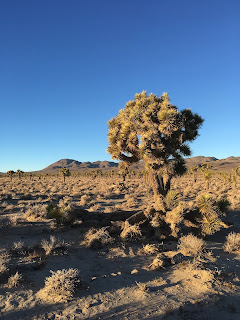 It is not an exaggeration to say there were thousands of rusted cans.  Thousands.  Including some of those rollback lidded sardine cans, which I'd never personally seen before.  There was also broken crockery, bed springs, a tin teapot, rusted auto parts, and hundreds of glass jugs, jars, and bottles ranging in size from teeny-tiny to several gallons.  It was a fairly crazy big pile of garbage to find in a national park.  In fact, Matt initially perceived the dump as an outcropping of the red/brick colored rocks we'd seen elsewhere.  But no!  It was a pile of rusty discards!!  It was rather interesting in its way and much less distressing than seeing modern folks litter in the parks.  Matt and I had a fabulous discussion over our find as we walked back to camp--debating at what point litter becomes historic, archaeology digs in garbage dumps in other locations, the pros and cons of leaving such antique trash sites intact versus returning the landscape to a more natural aesthetic, and so on. 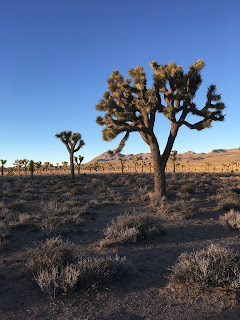 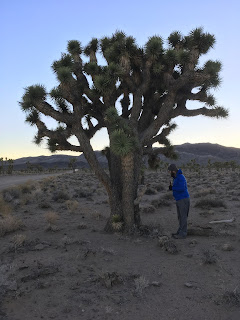 [Note:  Death Valley was only a national monument from 1933-1994.  It was expanded by more than a million acres and upgraded to national park status in 1994.  This dump likely predates it even being a national park and our cultural values about waste management and landscape management have certainly evolved during that time.] 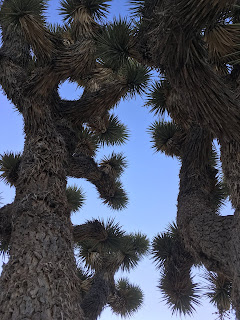 After returning to camp for breakfast, we climbed to the top of a nearby rise for a broader view of the forest as it sprawled out around us. 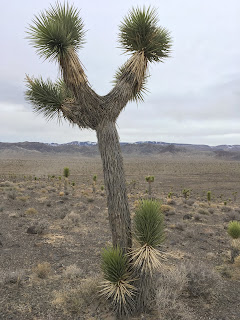 It was an impressive view of an impressive place.  I couldn't have imagined it.  Photos fail to fully capture it.  And I felt so delighted, so blessed, to be there basking in the majesty of it all. 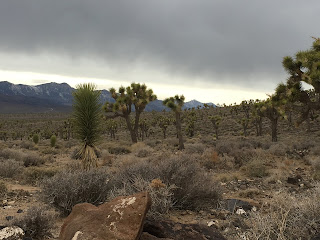