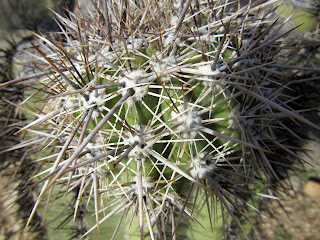 I've already made the declaration that we'd successfully hiked to a mountaintop this year.  This is the rather more detailed story of that hike.

First off, I really cannot begin to describe how surreal I found the Sonoran Desert to be.  It is so drastically different than the prairie where I grew up.  Prickly pear cactus is just about the only commonly shared feature--and even there the desert outdoes itself.  I, rather stupidly, never realized there were so many kinds of prickly pear cactus.  I thought there was one, but oh, no, there are lots.  Some are quite large, almost like small trees.  We saw one in Tucson that was taller than the house it was growing near.  Some are short, some are purplish, some have heart-shaped pads. 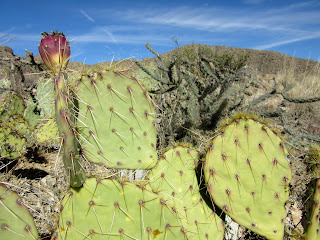 And everything about the desert was like that.   There was a lot more going on than we might have expected, a lot more diversity.
Our primary motivation for the trip was to "walk among the giants," through the  vast forests of saguaro cactus. 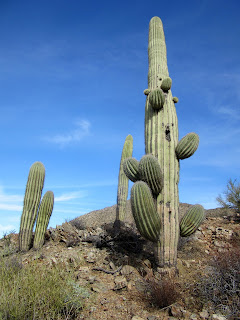 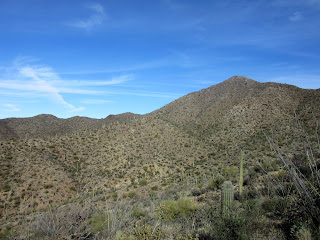 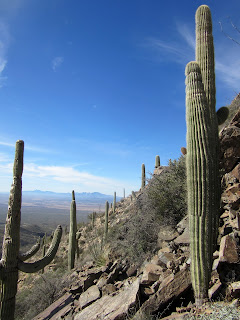 There was so much fauna aside from that though.  We weren't really expecting that.  Even though we'd seen the lush beauty of Zion we somehow still expected it to be more like Bryce, I guess.  More like Mars than like a jungle.  And it was a jungle of (mostly) pointy things, that is for sure.  We spotted pincushion cactus, ocotillo, hedgehog cactus, agave, yucca, brittlebrush, manzanita, acacia, ironwood, paloverde, prickly pear, mesquite, jojoba, creosote, chollas, barrel cactus, and more. 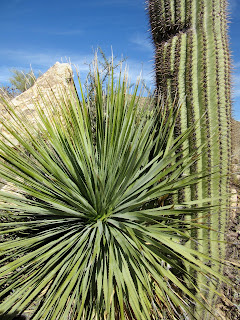 The trailhead for the hike to Wasson Peak departs from a small gravel parking lot two miles southeast of the Red Hills Vistor Center.  The first part of the trail--The King Canyon Trail--was originally a road built by the Civilian Conservation Corps (CCC) during the 1930's.  There was actually quite a bit of cool stuff built by the CCC around SNP--picnic shelters, fire pits, etc.
This former road is wide enough for walking two abreast.  That first mile was beautiful cakewalk.  We marveled at a handful of birds' nest which had been build into the protective spines of the trailside cacti and even spotted our first wildflower!  Stands of saguaro went on and on and on until they merged with the horizon. 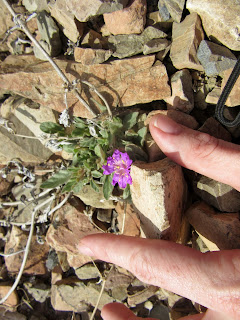 At just under a mile the King Canyon trail intersects with the Sendero Esperanza Trail and a large wash.  The CCC-built Mam-A-Gah picnic area is located near this junction, but Matt and I didn't need a break and just kept cruising right up the trail.  The next mile and half of hiking certainly got steeper, but wasn't bad.  The trail also narrowed to a single track as the CCC road was left behind. 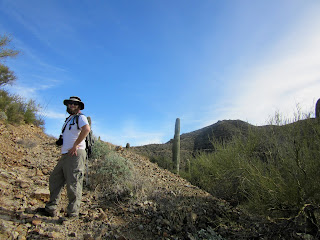 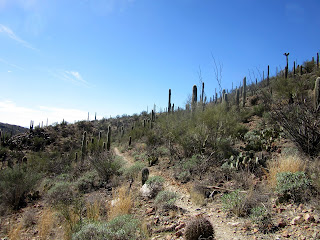 I was wondering how it would go--hiking a mountain when we'd not done any hiking, really, since the fall.  It was quite an easy climb though, until the very last bit.  There was maybe just one really steep mile and even that was broken up by long switchbacks.  But, really, it is a mountain!  It would be absurd to expect anything but steep at the top.  Even a "little" mountain like Wasson which peaks out at 4,687 feet.  For perspective, Wasson's peak is actually lower than the trailhead for Bunsen Peak in Yellowstone. 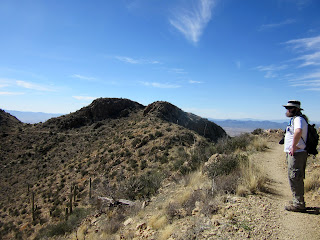 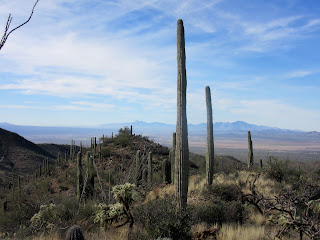 It was really interesting to observe how the changes in elevation and direction in relation to the sun (north-facing hills vs. south-facing ones) affected the density of the saguaro forest.  As we got higher and higher they thinned out in numbers.  There was still plenty of fauna--including some really neat prickly pear and barrel cactus specimens--just fewer saguaro.  We saw a couple more flowers in bloom....which seems especially wild given that it was just February.  Of course I am not used to climes that permit wearing t-shirts in February either! 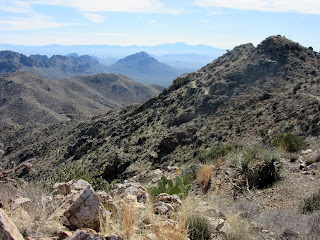 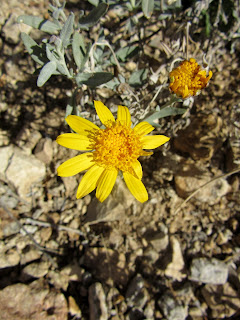 At the 3.2 mile mark, and junction with the Sweetwater Trail, we were greeted with a truly dazzling view of the Santa Catalina Mountains.  We stopped for a rest on this saddle to take it all in--and catch our breath--and let a chatty group of women get ahead of us on the trail.  The views here were so lovely in every direction that I would have been quite satisfied if the hike ended here. 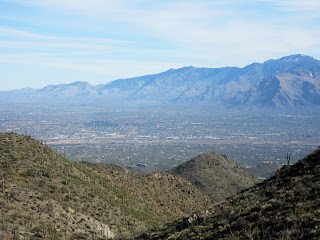 However, when a mountain peak is calling from a mere .3 miles away it seemed silly not to answer that call.  So, we hung left on the Hugh Norris Trail and headed up. 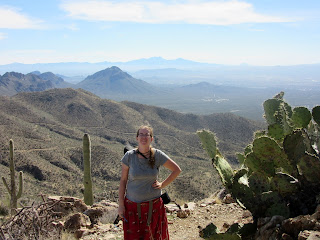 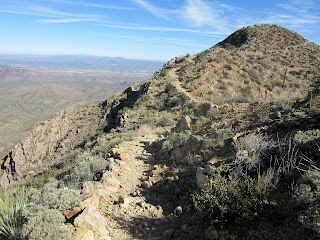 That last bit was fairly steep, but again, I was pleased with how relatively painless it was to make that last ascent.  We hiked past a couple abandoned mine shafts along the way, which was interesting (though not nearly so much as saguaros).  A Rock Wren bobbed up and down as it skipped from boulder to boulder along the trail ahead of us.  There were plenty of reasons to rest and soak it all in so there was really no objection to stopping when we needed to take a swig of water or catch our breath. 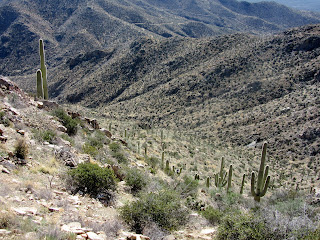 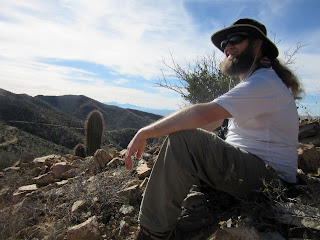 There were a handful of other folks at the top, but we were able to get a little distance and space to ourselves.  I laid down on the scattered rocks which covered the peak...and then remembered I was in the land of scorpions and spiders and sat back up to check things out.  Satisfied I had no undesired company I stretched out on the rocks again, resting my head on my waist pack. Matt had a snack.  I wrote postcards.  Matt got so relaxed that he fell asleep under that big, blue sky.  The clouds were cool.  The mountains in the distance were striking.  It was perfect.  We sat there in out t-shirts just radiating with contentment. 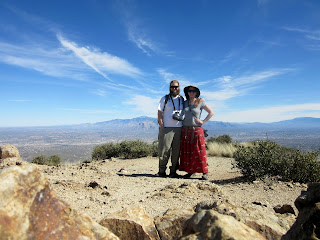 My only complaint is that I was a bit troubled by all the man-made landscapes I could see.  There were a couple different copper mines visible in the distant mountains.  The bright, scraped-clean look of it stood in plain contrast to the natural contours and colors of the mountainscape.  There was Tucson and its surrounding sprawl.  I found myself wanting to blot out the foreground of the vista with my hand leaving just me and the saguaro forest in the foregroun and the distant mountains as a backdrop...none of those houses, roads, and canals in the middle.  Matt encouraged me to look at it this way:  Thanks heavens for Saguaro National Park or perhaps the developments would have gobbled it all up. 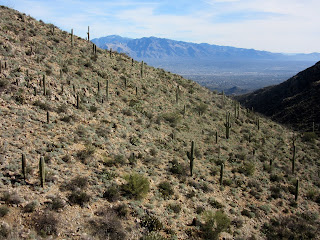 We were sure happy we'd gotten an early start.  It was already mighty toasty--hitting the upper 70s--as we began our descent.  Much of the return hike was the same route, however I'd been hatching a scheme to get a little more variation basically since the get-go.  I love a loop trail. 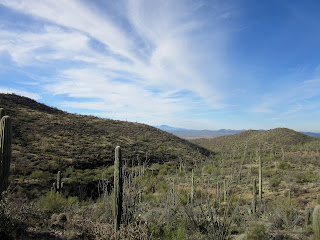 I'd noted at the start the hike that the trail we'd been traveling ran parallel to a wash.  As we gained elevation I was able to scope things out even better.  I was pretty certain we could get into the wash at the Mam-A-Gah picnic area and make that our trail all the way back to the parking lot.  The map seemed to confirm it (the wash was quaintly marked in blue on the map....though it was far from blue when we walked in it) and so at Mam-A-Gah we hung left as the trail crossed the wash.
Hiking in washes was an unusual and interesting experience for me.  We don't really do that up here in the mountain west.  I mean, most of the time our stream and river beds are full of water.  Or snow and ice.  Or all three.  Since rain is so very, very seasonal down there in the Sonoran Desert, more often than not the beds are dry.  As is the case with beach hiking, the sand can really make a body work for it.  The wash also had some rather large drops--stone shelves of a more durable material--that had to be navigated around.  That could also make a body work for it, too. 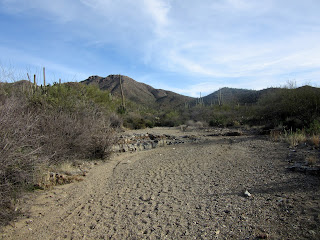 It was certainly a unique perspective though.  Since the washbed is lower than the surrounding banks it gave me the impression we were all alone in a desert wonderland.  And actually, we were for the most part.  We encountered just a handful of other hiking groups/pairs over the entire stroll. 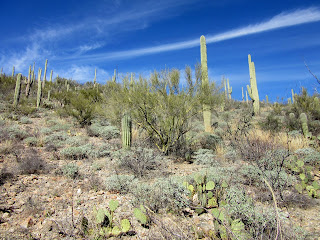 I finally was able to break into a wild, exuberant run in the wash.  Everywhere else seemed too hazardously poky for such demonstrations of the joy in my heart these mesmerizing, surreal, spectacular national parks inspire.  They make me want to run.  To cartwheel.  To sing and cry out with sheer delight.

As expected the wash ended at the road (or rather went under the road via culverts) and there was a spur trail up from the wash to the small parking lot where we'd left our car. 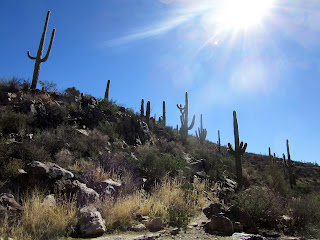 All told from the car to the peak and back again was about seven miles and a lovely desert hiking experience.  Flowers, birds, plants, sunshine, mountains, rocks, and two very happy national park junkies. 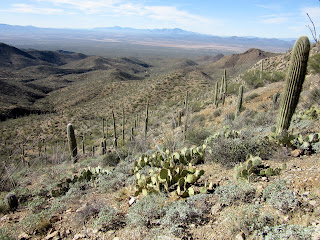