This has come up numerous times in my ramblings here, but I think it is so critical it is worth repeating often.   Its a good reminder for me as I continue to simplify and live a homemade life.  I hope its inspiration for those who might be considering such a life.   Start small.    Its wise--and perfectly good--to start small.

I think just about everything starts small.  Its one step taken, that in and of iteslf is not so remarkable, but which leads you to another step and another and another until looking back its amazing to see how far has been traveled.

I think people forget that.  I have been known to forget it myself!  I find it so disheartening to hear people talk about wanting to change, to improve, to learn, to grow, but how they feel they just can't.  They don't know where to start.  Or they don't think it will stick.  Or matter.  Change can sure be tricky...its new after all...but that doesn't mean its impossible.  Not at all.  And it doesn't mean its not worth doing.

If a person want to do something...all it takes is to just start the first steps.  If it seems too out of reach I like to break down the goal into smaller, more achievable ones.  Its easier when viewing each step (I will make one homemade cleaning solution) rather than the entire vision of the goal (I will use no chemical cleansers in my home).  And once one step is done it is easier to take the next (I've been using homemade Windex.  Next I'm going to make Soft Scrub).  Eventually the no chemical cleansers goal doesn't seem too far off.

Here is the real life example that lead me to write this post.

When we stopped eating dairy nearly seven years ago we discovered our favored brand of bread crumbs contained whey.  It also contained genetically modified corn and soy, partially hydrogenated oils, and chemical preservatives all of which I prefer to avoid.  But, that was years before I even knew about those things so I was pretty much concerned about the whey at the time.  We looked at other commercial brands and they either contained whey or were way too expensive (I can't resist: "whey too expensive!").  So we decided to learn to make our own.  It was astonishingly easy. 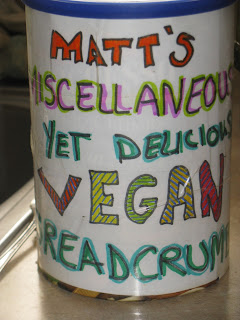 Matt just made up some breadcrumbs the other day which brought all this back to mind.  He'd organized the freezer and discovered we'd stashed a few nubby ends of loaves in there as they'd gone stale.  Run them through the food processor and whamo-- you got homemade bread crumbs.  We spread ours out on a baking sheet after processing and let them sit out a day or so to make sure they are good and dry. 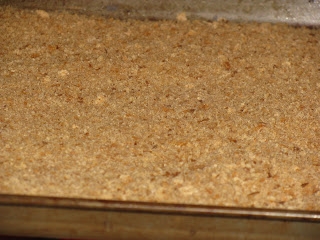 This is just a perfect example of a little step that can add up when put together with other similar small steps.

Its brilliant.  We don't waste stale bread.  We don't have a disposable container to throw out or recycle when we use up all the bread crumbs.  We know exactly what is in our breadcrumbs--no preservatives or unpronounceable bits.  It cheaper than store-bought breadcrumbs.  And it is so easy!

But, maybe you'd say "Sure its easy...if you make your own bread."

This is just a perfect example about how you don't have to start out all gung-ho.  You can ease your way in...one step at a time.

Before we started making our own bread we would hit up the day-old products on the bakery rack at the grocery store.  We'd buy a loaf for $.99 and let it dry out.  Then we'd run it through the food processor just the same way.    In fact, that is still listed on the label I made to fancy-up our breadcrumb container although we haven't been doing it that way for a number of years. 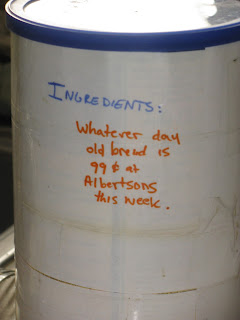 So, it doesn't have to be all or nothing.   Baby steps--taken one after another--have taken me places I could have never thought possible.  I hate to think that anyone is discouraged by thinking its all "too much" for a person to do.  It isn't.  Its just a matter of practice and experimentation and allowing for a learning curve.
By BLD in MT