The Garden Sink (Sort of)


I got a brilliant idea from the Montana Wildlife Gardener.  An outdoor Garden Sink!   I thought it was absolutely genius.  I filed it away as a projects we should do for our household. 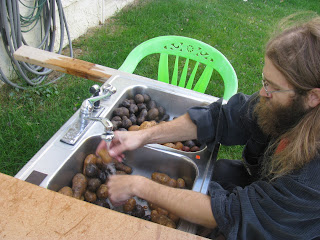 See, Matt hates bringing grit into the house from the garden produce.  For him hearing grains of soil grind between bowls in the sink or on the counter top is like fingernails on a chalk board.  It makes him shudder to hear it.  He usually makes some sort of horrified "Argh.....!" type exclamation. We try our best to leave all the soil outside where it belongs, but we still ended up with grit in the kitchen with our freshly harvested produce.  So when I told him about seeing the Wildlife Gardener's outdoor sink Matt was immediately on board.  But, it was summer and were just swamped with projects so it wasn't until late September that we actually started putting the idea into action. 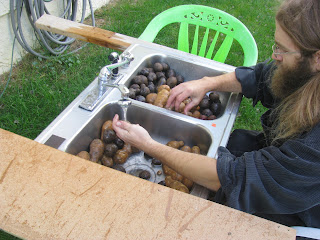 We still didn't manage to get a frame for it built--that's a winter project and hooray for having a garage to work in during the winter months--but we did use it for the month of October set up on 2x4s across the arms of two plastic patio chairs.  Pretty?  Oh, no!  Useful?  Oh, yes!! 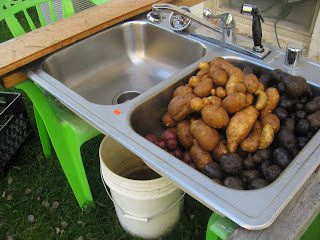 We picked up the sink with all the fixtures (hoses, drain stops, sprayer nosel, faucet) at the Habitat for Humanity ReStore.  We also had to buy a hose convertor so that we could hook the sink hoses directly up to the hose on the back of the house.  Even still the whole thing cost less than $30.  And we have the wood for the frame already, too, so that part will be free.

We popped a five gallon bucket under the drain to catch the dirty water and in that way all the soil ends up back in the garden and the water is doubly used--once for washing veg for eating and again for watering the plants still growing in the garden.  I think that is super-duper.  I love stretching water use and conserving water--every little bit helps! 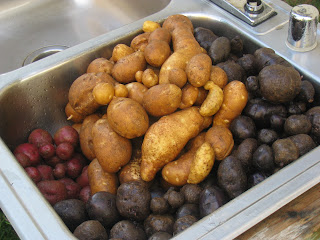 I'll be sure and show off the (hopefully) much more striking permanent sink structure in the spring!  But, I just couldn't keep this great idea under my hat until then!
By BLD in MT