We are trying out something new in the kitchen-garden arena--herbal infusions.

At the community garden meeting this week one of our fellow gardeners suggested using chive heads to infuse vinegar for use in dressings, sauces, and marinades.  Following up on this idea Matt and I also decided we'd try infusing olive oil as well.    In classic style I read a few variations online and then went home and just decided to wing it. 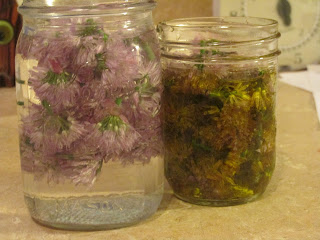 So I cut and washed the chive blossoms, dumping the wash water right back onto the chive plant out the front door in our herb patch.

For the oil infusion I used 1 cup olive oil to 1/2 cup blossoms.

For the vinegar infusion I used 2 cups vinegar to a bit more than 3/4 cup blossoms.

Just one day later the vinegar had already take on a fantastic lavender hue and quite the chivey-oniony aroma, too!  It SO pretty! 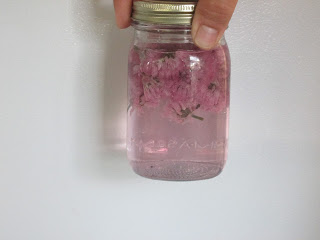 The olive oil looks pretty much the same at this point.  I've am also at a bit of a loss as to where would be the best place to steep it.  I am not worried about the vinegar going rancid or mouldy or anything, but I am just a tad wary that it might happen to the oil now that I tossed flowers into it and all.  We put it in the fridge at first, but this morning it was so thick I am not sure the chives are appropriately steeping--some were sitting on top of the oil, actually.  So we moved it to the counter for a few days after which point I will move it back to the fridge until we're done using it up.

I am keen to try out these infusions--and plan to this weekend.  Yay!

It is all a grand experiment and time will tell, but I think I could get used to this infusion idea.  I even have a few more ideas in mind already as more herbs become ready to harvest in the garden.
By BLD in MT