Our house had a hot tub on the patio when we moved in.  It certainly wasn't a factor in our consideration of buying the house, but well, it was just there.  I have always liked soaking in hot tubs.  I have a bad back.  And it was there.  So, we thought we'd try it out for a year and see how we liked it and how expensive it was to run and so on. 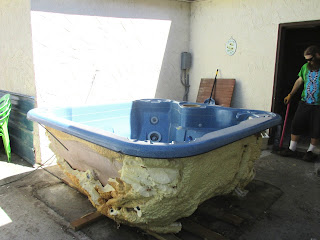 We did enjoy the pleasure of it and it did seem to help me sleep better despite my back.  But, as it turned out it was more expensive than we felt it was really worth--no matter how much we liked it.

I don't mind paying for luxury items.  Sometimes its nice to treat yourself to something that is not about necessity and only about enjoyment.  Like that raw cashew cheesecake we bought a couple weeks ago.  It was absurdly priced at $5 a slice, but it was so yummy that it was worth every moment and mouthful of enjoyment.  That is money spent wisely on luxury, I think.  It was actively enjoyed the whole time we owned/used it.   The hot tub was the opposite of that.  We were paying for electricity to heat it (not to mention wasting energy) and (much to the contradiction of my natural lifestyle) buying chemicals to treat it 24/7 when we only used it for, at most, twenty minutes a day.  And in the end we didn't even use it every day.  That is not money well spent, in my opinion.  I'd rather buy more concert tickets with that money!  Or more cheesecake, for that matter! 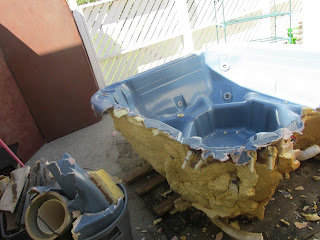 And as the straw that broke the camel's back the darn thing started to leak (and the leak was only getting worse and worse) and fixing said leak was going to be pricey and hard to do because of its location. 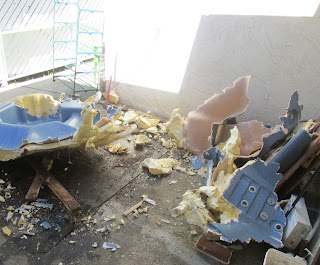 Did I mention the hot tub is also nearly two decades old? 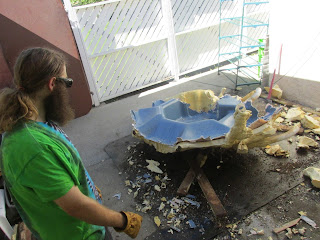 It was just time for the hot tub to make its final exit. 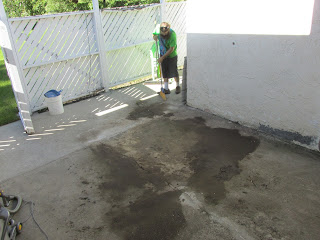 But there was no way it could be removed from the yard without taking down at least part of two fences--if we left it in one piece that is.  So, Matt borrowed his brother's sledgehammer and went to town on it with sheer force and determination that I found amazing. 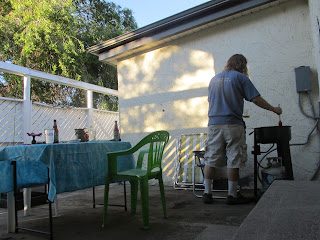 See, I have to admit that when he took the first swing and only a small chunk of fiberglass broke off I thought, "This is going to be impossible!" 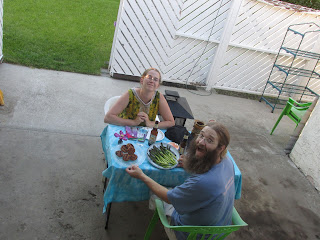 But, after all these years living and working with Matt I should have known better.

Matt is a machine.  And like a machine he was not to be discouraged.  A little more than three hours later we were stacking manageable chunks of hot tub on a tarp in the garage (where it sat for a day until we could borrow a pick-up [Thanks, Roger & Sharon] to haul it to the landfill.)  We recycled what we could, but, regretfully, most of it was junk. 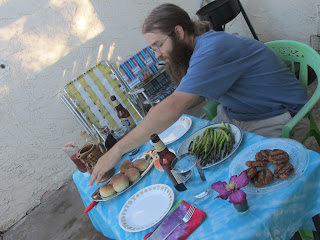 I wish we could have done....something....with it.  Anything.  We talked about trying to use it as some sort of raised bed.  But decided it would be both ugly as far as raised beds go and take a tremendous amount of soil --that we don't have-- to fill it.  And we would have had to take down the privacy fence around the patio.  We talked about giving it away, but in addition to the difficulty of removing it intact there was the fact that sometimes garbage is just garbage and a broken, twenty year old hot tub with mouse-eaten foam insulation, a mold-ridden cover, and inefficient heating system, regretfully, was just that.  Garbage.  I console myself with the fact that its not like we buy wasteful landfill-claiming junk like this in our normal day-to-day life.  It is just one more relic of the previous owner's lifestyle that we are having to deal with.  It is what it is.  But, it was painful to be responsible for so much waste. 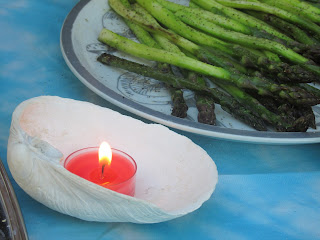 It is absolutely not painful to have that behemoth finally off of our patio though.  Oh, its so nice.  Nicer than I could have imagined it would be.  You know what we discovered?!  We actually have a pretty big patio to enjoy now.  Who knew?!  It was being hidden by the hulking, humming, gurgling, energy-sucking hot tub all this time. 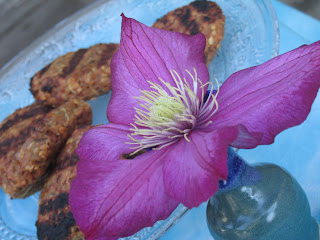 And we've made good use of it already.  Breakfast and dinner every day have been enjoyed out of doors.  Fires have been built every night.  Two nights ago we had Casey over for dinner and drinks by the fire on the patio!  It was fabulous!  Both Matt and I feel we are going to get much more use out of the patio in this configuration than we did when it was the hot tub spot.  It makes much more sense for us. 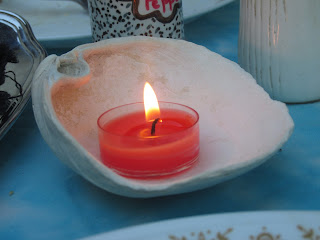 Now my mind is a whirl with vision of what to do with the space.  Its pretty sparse at the moment--a folding table, dime-a-dozen plastic monobloc chairs, and a free-standing outdoor fire place.  We'll have to get a proper outdoor table now.  And I am thinking of making a bunting.  I'd been meaning to replace the prayer flags that had flown along the patio until the were torn to shreds in a strong wind earlier this year.  I think buntings are fun and I certainly have enough scrap fabric to make it happen.  I also learned that Matt had no idea what a "bunting" was.  Or rather he knew what they were, but not that they had a name. 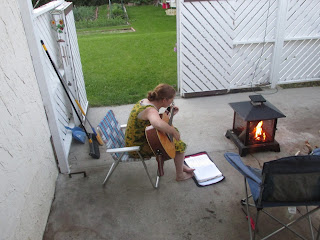 I don't think this demolition project will be a decision that we regret.  I will just go back to enjoying the heck out of every moment that I am hot tubing during my infrequent hotel stays.   That works and make much more sense for me.

Matt was funny the next day though.  He said something like, "Gee, after all that you know what a guy could use for his sore muscles?!  A soak in a hot tub!"  But, we decided we'll just sit by the fire instead. 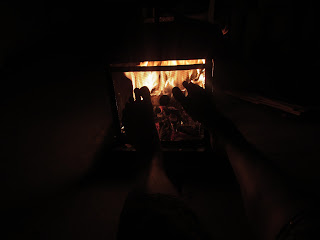