The Gorge is a Reason for a New Dress 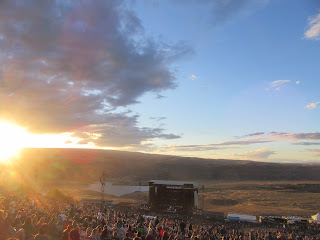 As I mentioned earlier, I went on a five day vacation with some old, hometown friends over the Labor Day weekend.  We attended three nights of Dave Matthews Band concerts and camped out at the stunning Gorge Amphitheater, along the Columbia River in south-central Washington.
In the midst of my trip preparations I got a wild hair and decided I should make a new dress for the occasion.  Even though I had plenty on my plate as it were.  And plenty of dresses.... 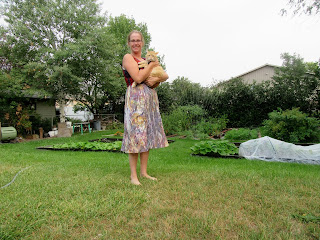 Still, the Gorge seemed reason enough and I'd had my eye on this cool combination of fabrics which I'd found in my stash.  They seemed to scream "concert dress," at me. 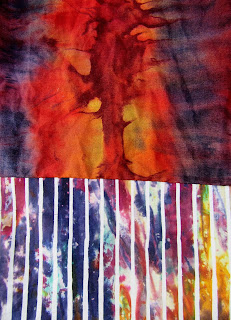 As usual, who knows where it came from, but odds are my mother had something to do with it.  I don't know if it was intended to be coordinated, but they sure struck my eye so I ran with it. 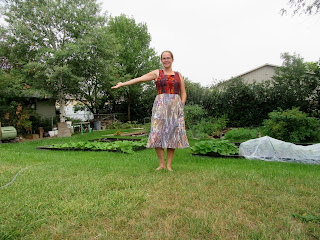 Initially, I'd considered the white stripes for the bodice and the tie-dye for the skirt, but there wasn't enough of the tie-dye and so that sort of forced my hand.  As it happens, I think the long white lines look swell on the length of the skirt.  The bolts of tie-dye fire running up the back, to either side of the zipper, also totally rock my world.  So, it all worked out as it was meant to be, I guess. 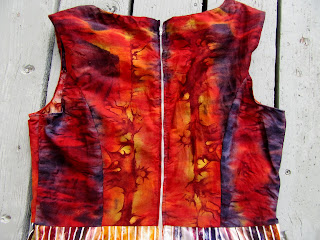 I had just tiny scraps of fabric left.  I was quite pleased with the efficient use of it.  There was one continuous piece from the bodice material that is about a big as a sheet of paper, but that is it--the rest was in ribbons.  I had to be pretty careful how I laid out the pattern pieces, actually, so that I could make it work.  There was lots of futzing with it.  I ran out of skirt fabric before the pocket facings were cut, so they're actually made of bodice material...not that anyone but me knows that since they're on the inside of the pockets.  I also had to make the skirt four inches shorter than normal to have enough fabric to go around. 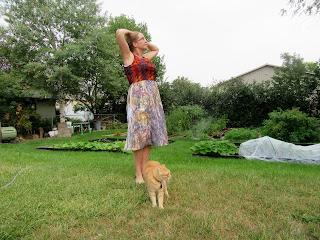 It is a swell dress--colorful and fun, lovely for dancing.  Though I do wish I'd had enough fabric to make the skirt fuller.  Sometimes one just has to work with what they've got though. 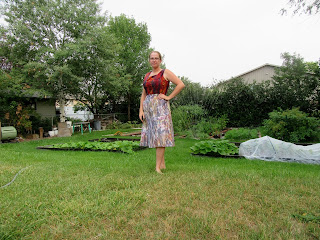 I'm glad I squeezed in the time to make it.  Now every time I slip it on I will think of my friends and that good time we had together in such a special place.  I like that a lot.