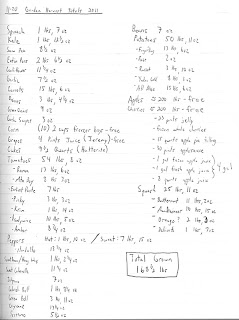 Matt got a nice kitchen scale from my father for Christmas.  Prior to this we had a tiny scale that went up to 1 lb.  That meant weighing things in small batches as we harvested the garden.  It also meant we couldn't really weigh any of the squash or the few more-than-a-pound colossal potatoes until we cut them up to eat them.  Now Matt has weighed all the remaining squash and thus I think our tabulation of garden yields is finally complete.    If you click on the photo it should become large enough to read.  Matt circled the total grown, but that doesn't include the "found" food like grapes, sour cherries, and apples.  He also didn't note that our tomatoes ended up as 24 pints of sauce.

I can't be certain that the list is 100% accurate.  I am sure we missed recording a thing or two, but it gives us a good general idea of how we did.
By BLD in MT