"Soup" of Rice and White Beans

I made an impulse selection at the public library on a recent visit.  It was a cookbook called Fagioli.  I had to use the restroom and was in a bit of a hurry anyways so I just grabbed it without really looking it over.  I knew it had to do with beans and Italian cuisine, both of which I enjoy.

Oh, boy, what a neat cookbook!  I might actually have to buy it someday (which, because I work in the library, I don't do real often so that is saying a lot). 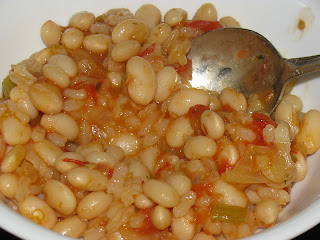 It was particularly interesting to me because the book really promoted overnight soaking and slow cooking of beans.  My bean cooking technique has always been the two minute boil, quick soak method and pressure cooking.  It is faster for sure, but for some reason it never occurred to me that just because it is the fastest doesn't mean it is the tastiest.  Usually the longer something takes the better it tastes so the author's bean cooking rational made sense to me.  I will have to try it several more times before I give it a final verdict, but the slow cooked beans were awfully good both times we've tried them, better than normal.  It is possible that it was just the recipe and not the method that made the tasty meal.  We're talking about doing a side by side comparisons of slow cooked and pressure cooked beans to find out.  Matt loves a good science project, especially in the kitchen.

Here is my minor adaptation of one recipe from the book which both Matt and I really enjoyed.  It was called a soup, but unless I seriously mis-measured (which I don't think I did) it really wasn't very soup-like, really.  Most of the liquid cooked off leaving no broth to speak of.  But, it was a delicious bean, rice, and tomato dinner.  If you wanted it to be a real soup instead of a "soup" you might just add a few extra cups of stock.

Soak beans for 8+ hours.  Drain.  Rinse.  Drain.
Combine beans, garlic, and 8 cups of water over medium heat.
When it begins to boil lower the heat and simmer uncovered for about 1 hour, until the beans are tender.
Meanwhile, heat the oil in a skillet over medium heat.
Add onion, herbs, celery, and crushed red pepper.
Stir frequently for about 10 minutes until the onions and celery are tender.
Add the tomatoes.
Continue cooking and stirring for another 15 - 20 minutes.
When the beans are tender add the tomato mixture to them.
Season with salt to taste.Cook another 10 minutes.  Stir in rice and continue cooking 20 more minutes until the rice is tender, yet firm to the bite.Serve!
By BLD in MT