I saw the photo below on pintrest, back when I was experimenting with pintrest and before I decided it wasn't for me.  I thought, "OOOooh, I like that.  I'd like to do something like that someday."
While my handyman hasn't yet had time to build me one as the universe would have it I found something strikingly similar just sitting on the street corner by a garbage can and a few bags of trash.   Granted a much smaller and freestanding version, but none the less.  (I am still a beginning knitter though so it organized my limited yarn supply quite well.) 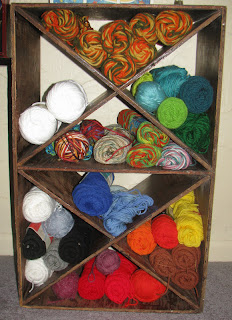 I think it had been being used as a bird cage stand prior to its reincarnation as a yarn rack.  There was bird seed in the deep Vs and a couple smears of white that I presumed to be bird droppings.  A little clean up and it was good to go though. 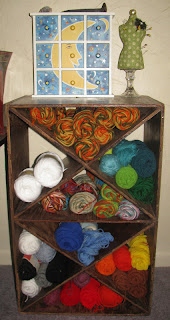 I love it when things you want just fall into your lap like that.    Or like my new umbrella style clothesline which I also found piled with the trash.  As my mother always said "One man's trash is another man's treasure."  I am sure glad I spotted these quite useful treasures before they were dumped into the landfill.
By BLD in MT