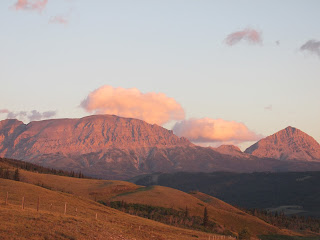 We woke early and broke camp with the first light.  We wanted to camp at the Many Glacier campground and we'd heard it fills up fast--usually being fully occupied by 8:00 am.  So, we wanted to get a jump on things.  Plus, neither of us ever really "sleep in" while camping.  After a short drive secured our campsite at Many Glacier, set up the tent, and promptly hit the trails again.

For our first day in the Many Glaciers area Matt had his heart set on a hike through the Ptarmigan Tunnel.  The Ptarmigan Tunnel was built in the 1930's to accommodate horse travel into the backcountry.  The tunnel is 240 feet long and takes a hiker through a mountain.  When you emerge on the other side there is an entirely different mountain range to behold.  Matt thought that sounded pretty cool.  Plus, you have to hike along some gorgeous trails to get there.  So, off we went! 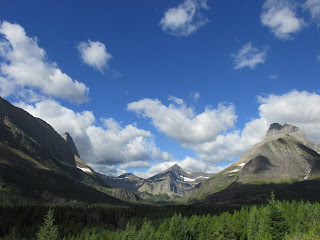 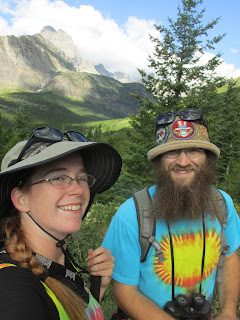 The hike starts at the Iceberg Lake Trailhead.  Since we were camped at the Many Glacier campground and so we were able to walk right over to the trailhead from camp.  The sections of Iceberg Lake Trail is short though as we soon branched off on a short, steep connector trail before we were traveling along Ptarmigan Trail.  Matt and I both had a moment of doubt when we were climbing up the steep part, but once we got on Ptamigan proper it was much more reasonable in elevation changes.  All told we'd end up gaining about 2,300 feet in elevation over the course of the roundtrip distance of eleven miles.  Not too bad. 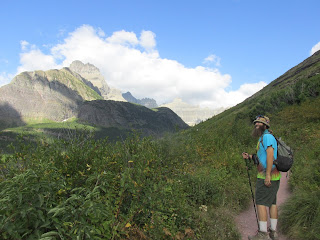 The hike starts in sort of open country with wide panoramas of epic mountains in every direction.  It then transitions to more wooded country.  We didn't see nearly as many birds as we might have hoped for.  We did see a red-tailed chipmunk gorging itself on bear grass seeds though.  It was hilarious.  It crawled up the tall stalk and used rear feet and tail to stabilize itself while stuffing seeds in with both front paws.  If startled the little critter would slide back down the stalk like a fireman's pole and disappear in the tall grass. 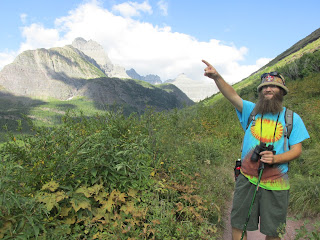 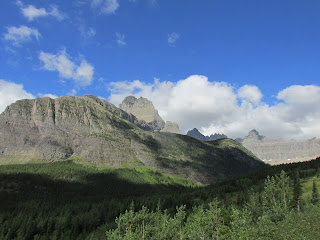 Along the way we passed Ptarmigin Falls and stopped to fill our water bottles in the clear, running water. Many people were snacking and resting there.  Neither of us felt like we needed a rest yet though so we didn't stick around at the falls for long. 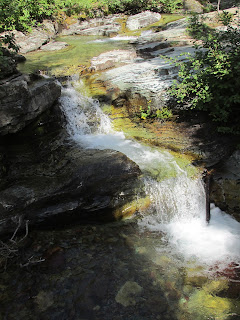 After leaving the falls we crossed a wooden foot bridge over Ptarmigin Creek.  Shortly after is where the trail forks with the Iceberg Lake Trail leading away to the left and the Ptramigin Tunnel Trail heading right.  We continued on down Ptarmigin Tunnel Trail thinking that perhaps, if we weren't too tired, we'd tack on Iceberg Lake on the way down.  In the end, we did not, but hey, gotta save something for next time! 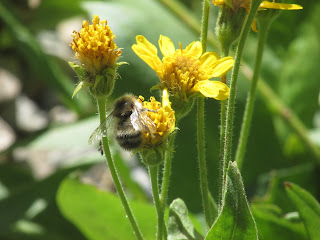 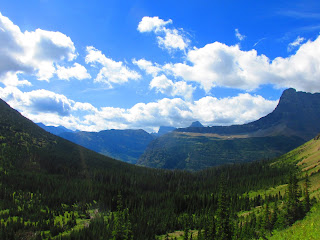 And on we hiked.  Every direction provided so much glory and amazing beauty that it was uunreal.  It was like being in a different country.  We saw a couple golden-mantled ground squirrels with cheeks stuffed to utterly improbably and amusingly full proportions.  It was fantastic.  I couldn't stop talking about it afterward. 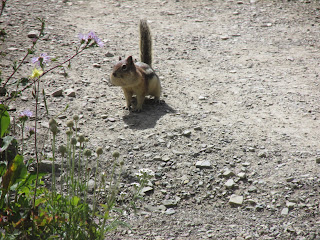 We admired the berries and flowers as we hiked, stopping to eat thimbleberries whenever their redness called to me from the lush greenery.  As we went along we were able to ID Twin Berry, orange dandelion, pearly everylasting, Indian paintbrush, St. John's wort, baneberry, lanceleaf sedum, and yellow toad flax (or Butter-and-Eggs Plant).  The last is an invasive species in Glacier National Park and is part of five-species eradication effort.  I didn't know that until I got home though.  They are beautiful flowers though, I must say. They look liked two-toned snapdragons.  The St. John's wort were my new favorites.  They looked like tiny red balls until they bloom into small yellow flowers.  There are apparently invasive varieties of St. John's wort, too, but I didn't see any of them. 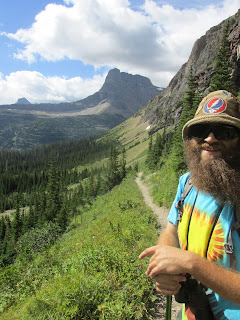 At last Ptarmigin Lake came into stunning, glorious, magnificent view--the sunlight making the water look dazzling green-blue.  And on the cliffs above the lake I saw mountain goats!!  Five of them, including one little bitty baby one.  We sat off the trail for a while so I could watch them and we could have a drink and catch our breath before the big assent to the tunnel itself. 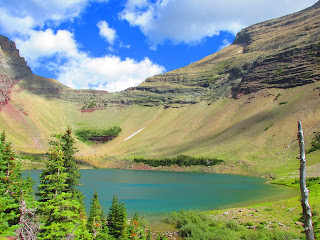 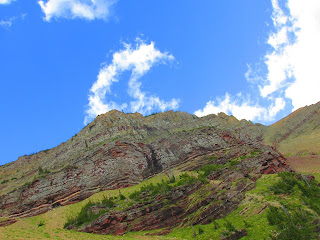 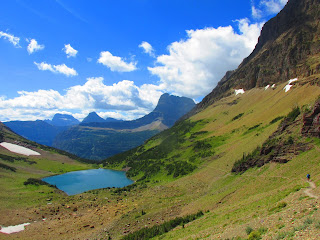 Not long after leaving Ptarmigin Lake we were above the treeline taking in the awesome view of the Ptarmigin Wall.  The Ptarmigin Wall is an arête which is basically an extremely thin ridge of rock that separates two valleys that were carved out by glaciers.  They look so near.  Like razor thin walls of mountains.  They always have great lines to them.  Out in this treeless area we saw our very first hoary marmot.  We don't see many "new" mammals these days so this was pretty exciting.  And the marmot seemed to know she owned the mountainside.  She laid out on a rock, perfectly flat and adorable, as we walked past. 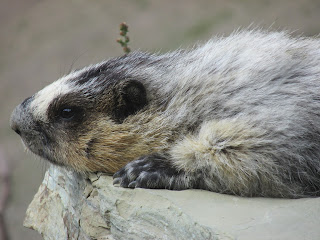 Once past the lake the trail takes some serious switchbacks to get up to the saddle of the mountain.  It goes up 500 feet or so in about 2/3 of a mile.  But, the rest of the hike was so easy (and we'd been expecting much more steepness all along) that it wasn't so bad.  We stopped and watched the five mountain goats from our new closer perspective as one of the switchback corners.  Up, up, up we walked and then all the sudden we could see the tunnel door! 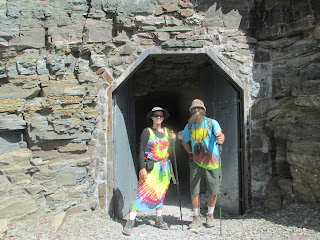 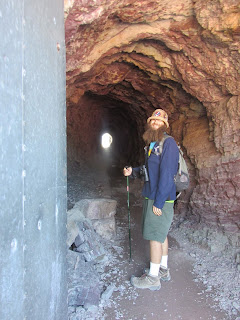 The tunnel was much shorter than I had pictured in my head.  I guess it seemed like it should take longer to go through a mountain.  But, I suppose we were near the top of the mountain--where it is thinner.  In any case, it was so cool and refreshing in there!  It was fantastic. 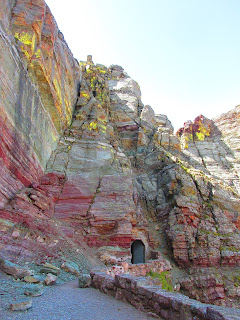 And when we came out the other side it was a whole new world!!  A world of red rocked mountains that went on and on and on!  Lake Elizabeth was below us in the distance.  Glaciers capped a few of the surrounding mountains.  Waterfalls of melt water were pouring off of them. 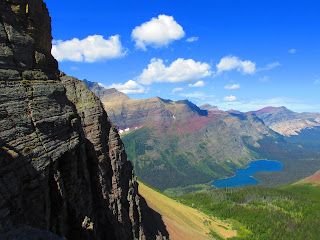 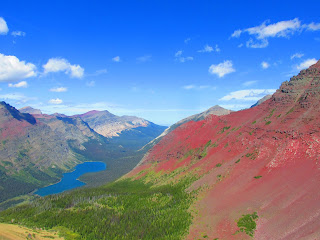 It was cold on the other side of the tunnel.  We were in the shadow of the mountain and it was cold, particularly since we were damp from the exertion of hiking.  There was still snow on this side!  Not much, but still!  We both donned our jackets.  Other hikers were pulling out winter hats and gloves!  I kind of wish I had thought to bring some!  But, it was awesome.  Breathtaking.  Astonishing.  Unbelievably epic. 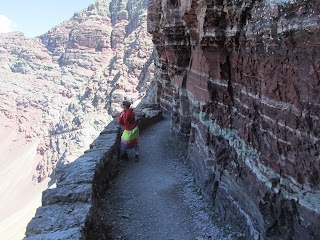 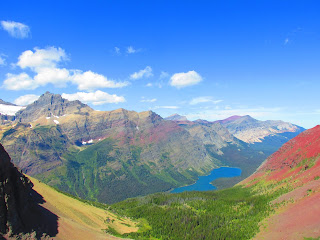 After enjoying the sights, taking photos, drinking water, hiking a bit further on the trail to gain even greater perspective on this new mountain range, and hollering with a few other hikers to hear the ringing echo we retraced the route back.  Back through the tunnel, down the switchbacks, into the treeline again, past the lake, and on down. 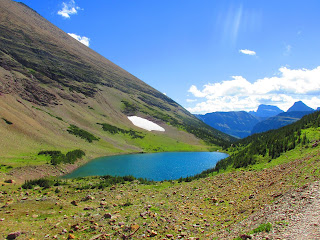 We spotted a herd of female big horn sheep with young on a mountainside above the trail.  They looked so much like the rocks they were in that it would have been easy to overlook them.  We just happened to stop and take it all in at just the right moment. 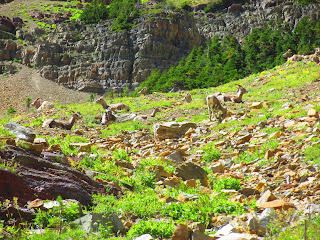 Somewhere in there I went off trail to go to the bathroom.  I took off my hip pack, set down my binoculars, and with only my bear spray headed off into the trees.  When I came back to the trail I must have overlooked my binoculars.   Matt did, too.  So, they were left behind and I didn't realize it until we were nearly down the mountain again.  I was so torn.  I really like those binoculars.  They are small enough to carry everywhere, but good enough quality to be worth carrying everywhere.  And my dad bought them for me.  And I have a hard time not getting double vision in most binoculars, but with my little Bushnells I see just one clear image, as it should be.  And it was only the second day of the trip and I was going to want binoculars!  I was so torn.  I didn't really want to hike back up the mountain, but I didn't want to leave them behind either.  In the end, I did though, hoping that whomever would later find them had been in need of binoculars themselves.  As we reached the trailhead parking lot Matt suggested we tape a note on the trailhead sign about my binoculars.  He thought it would work.  I figured it couldn't hurt.  "Lost: Small Bushnell binoculars.  If found return to site #33.  Thanks!"  And you know what, when we got back the camp the next day they were sitting on a rock in a beam of sunshine.  I was so overjoyed.  Nice people are the best.  I wish we all heard more about nice people and the simple acts they do that make this world such a good place.  I hoped they'd come back so I could thank them properly, but they never did.  Thanks a million mystery hikers! 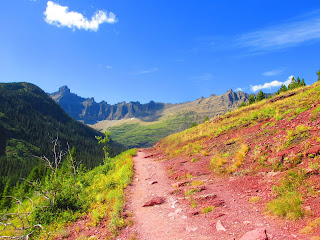 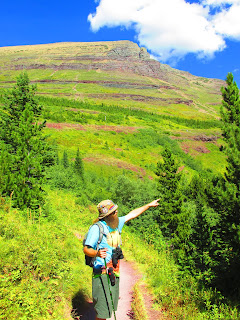 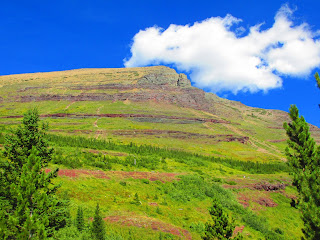 Having decided that soaking our feet after the previous day's hike was a brilliant idea when we got back to camp we headed down to the nearby Swiftcurrent Lake to restore ourselves.   I ended up getting a huge spider on my hand that nearly made me pitch my camera into the water.  But, I checked myself just in time.  No matter how outdoorsy I am I still have never shaken that dread of spiders.  Later we went back to camp for dinner and relaxing.  A bear came through the campground while Matt was cooking.  We never actually saw it, but it sure caused a commotion!  I watched cedar waxwings eating berries from the trees around our campsite and joined in with them on some of the thimbleberries that were thick throughout the camp. 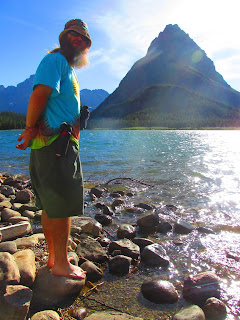 An even greater second day.
By BLD in MT