Out and About With Snowshoes 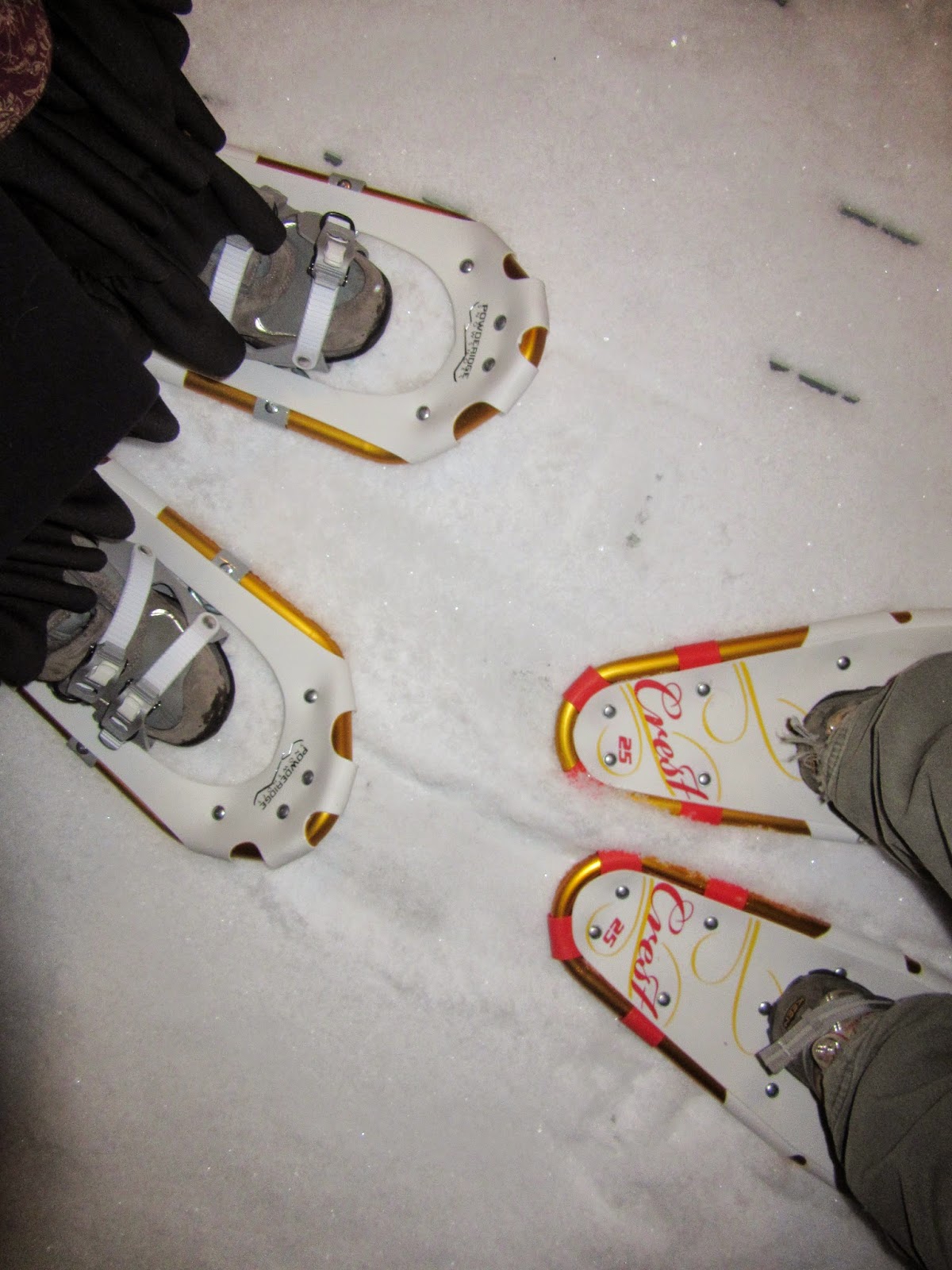 Matt and I each got snowshoes for Christmas from my dad.  As luck would have it we've also gotten a whole heap of snow!  While Montana is known for very snowy winters, the town where we live really isn't.  Having grown up on the cold, snowy plains of northeastern Montana this is one of the things I loved most about moving here.  So, its real nice that we got so much snow to play around in. 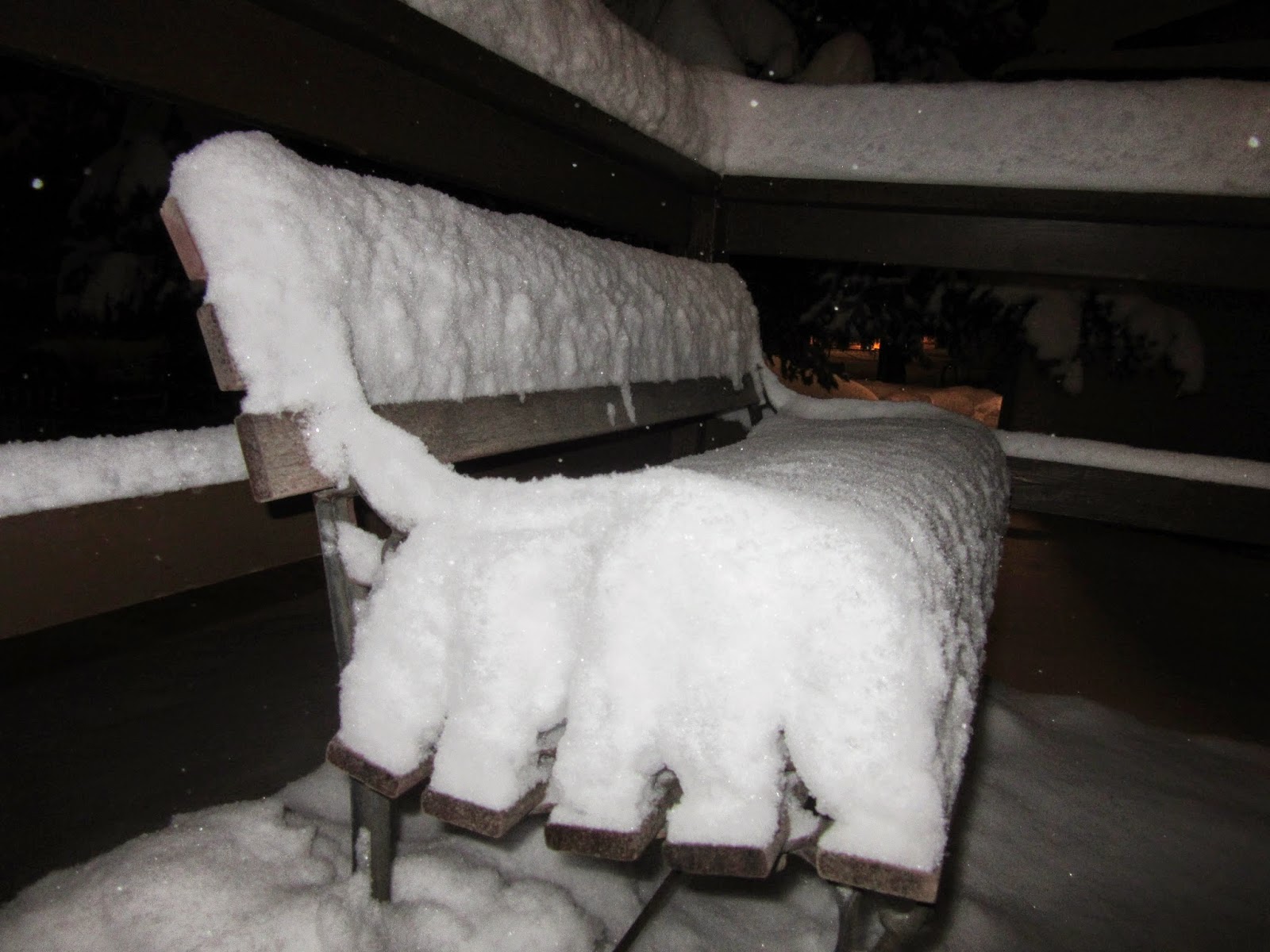 For our first outing we headed off west of our house to a city park and trounced around a while.  We ended up by the basketball courts where Matt found an abandoned basketball in a snowbank.  So, he shot hoops for a while.  I don't think I've ever seen basketball done in the snow before.

As I was watching Matt shoot hoops I noticed a trail of prints leading from the corner of the park, across the basketball court, and on through the playground of the school adjacent to the park.  I suggested we follow the tracks to see where they went.  Off we went.  It was pretty spectacular, actually, because most of the snow was pristine and untouched, sparkling in the moonlight like little diamonds.  It was lovely to say the least.  And quiet.  And not cold, as long as you stayed moving. 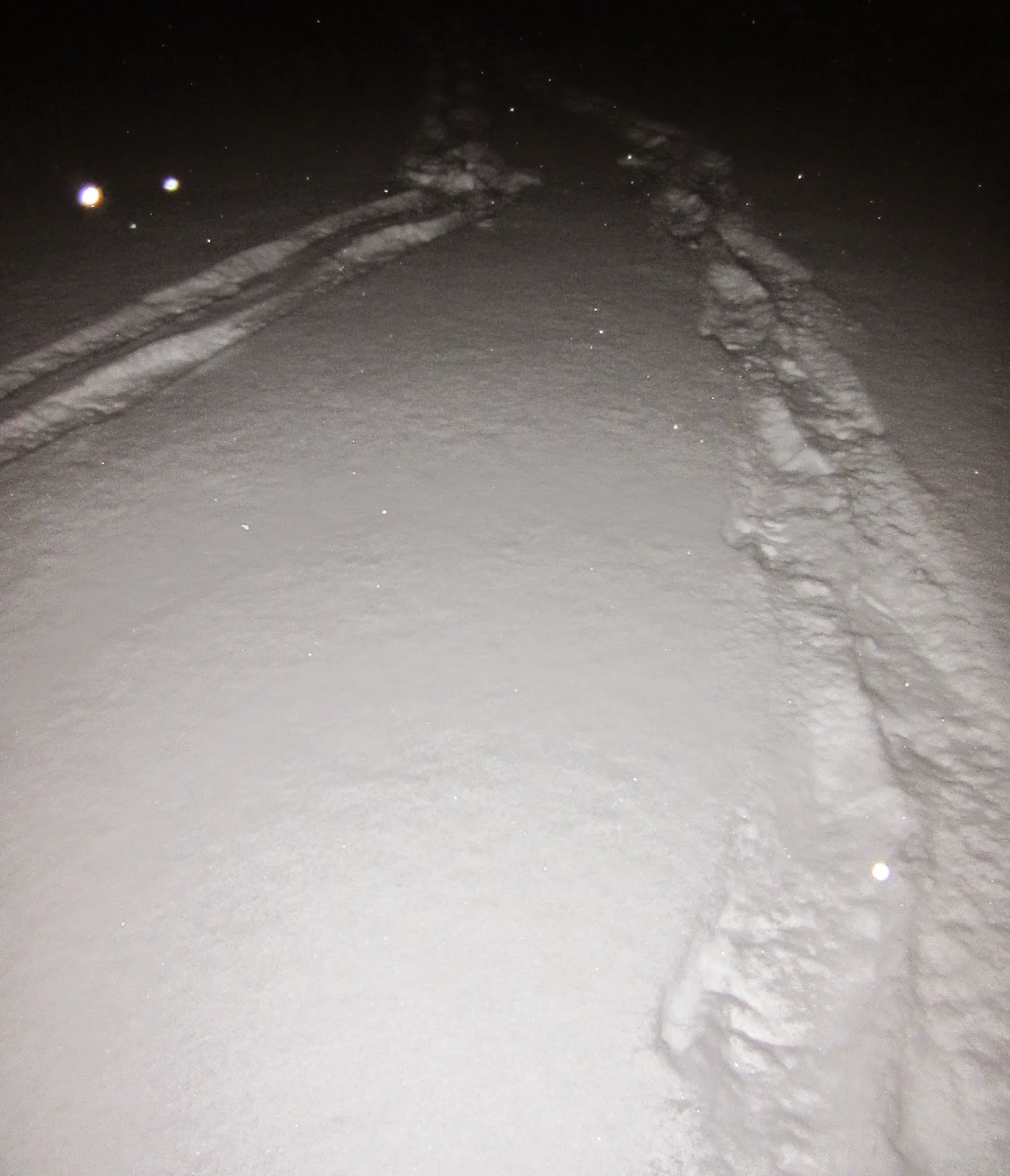 We followed those tracks--they turned out to be kitty--through the school, south down the sidewalk, across the street to the east, north on the sidewalk, across another street, and then, finally, disappearing into the parking lot of an apartment complex north of our house.  We had to give it up there because the kitty's little paws didn't leave a strong enough impression in the packed snow of the parking lot.  It was a fun little diversion though. 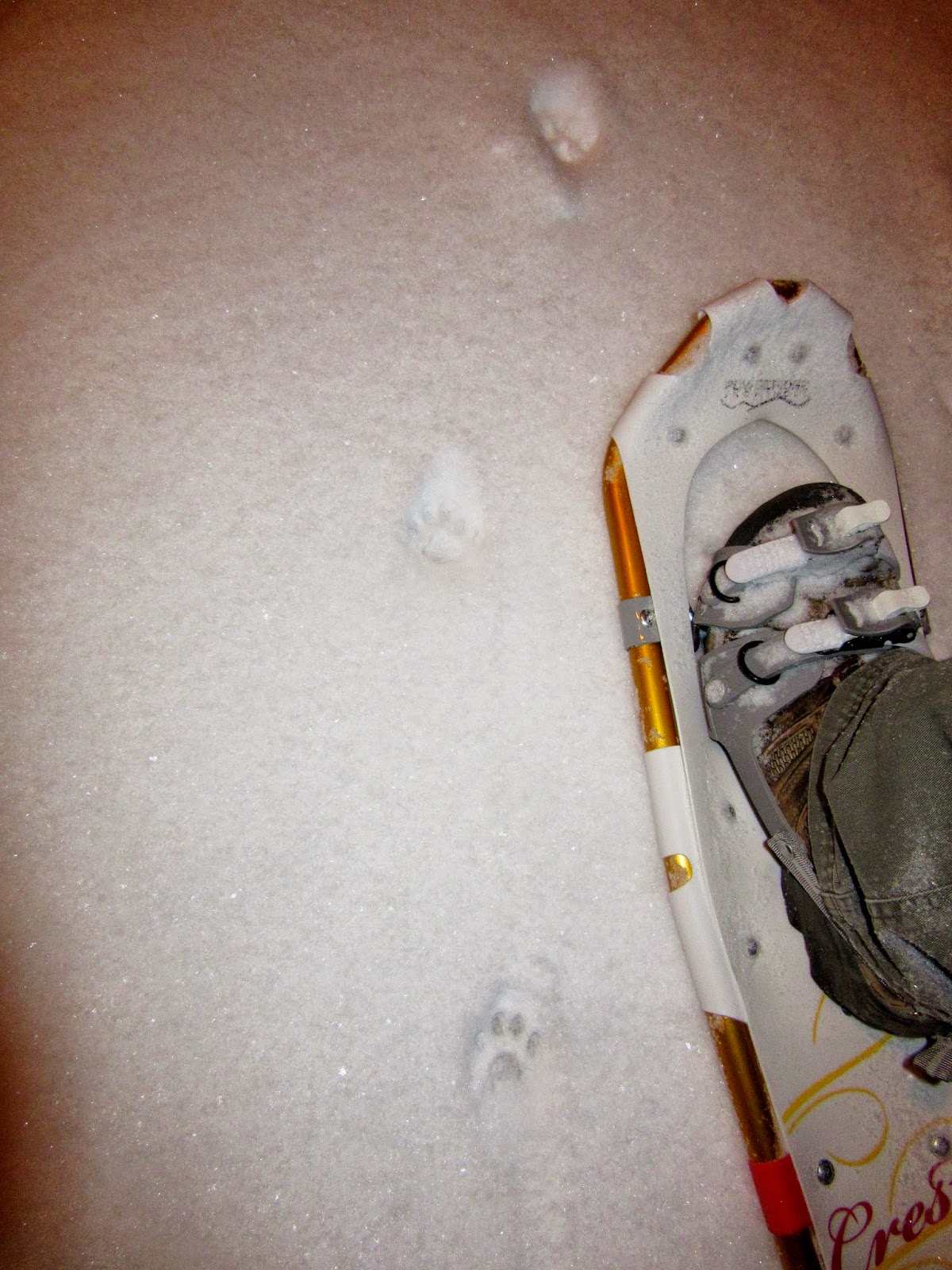 As we walked back home we noticed that our flags, mounted on the front fence, were dragging in the snow.  The snow is piling up--more than 20 inches since Christmas Eve.   The backyard is especially deep.  Its perfectly smooth, sparkling, and untrodden.  Its beautiful.  The front of my house is rather a different story.  The road is all squishy and rutted and slick. We've gotten stuck twice trying to get up the driveway.  No matter.  In one instance the neighbor came out and helped Matt push.  In both instances we were not stuck long. 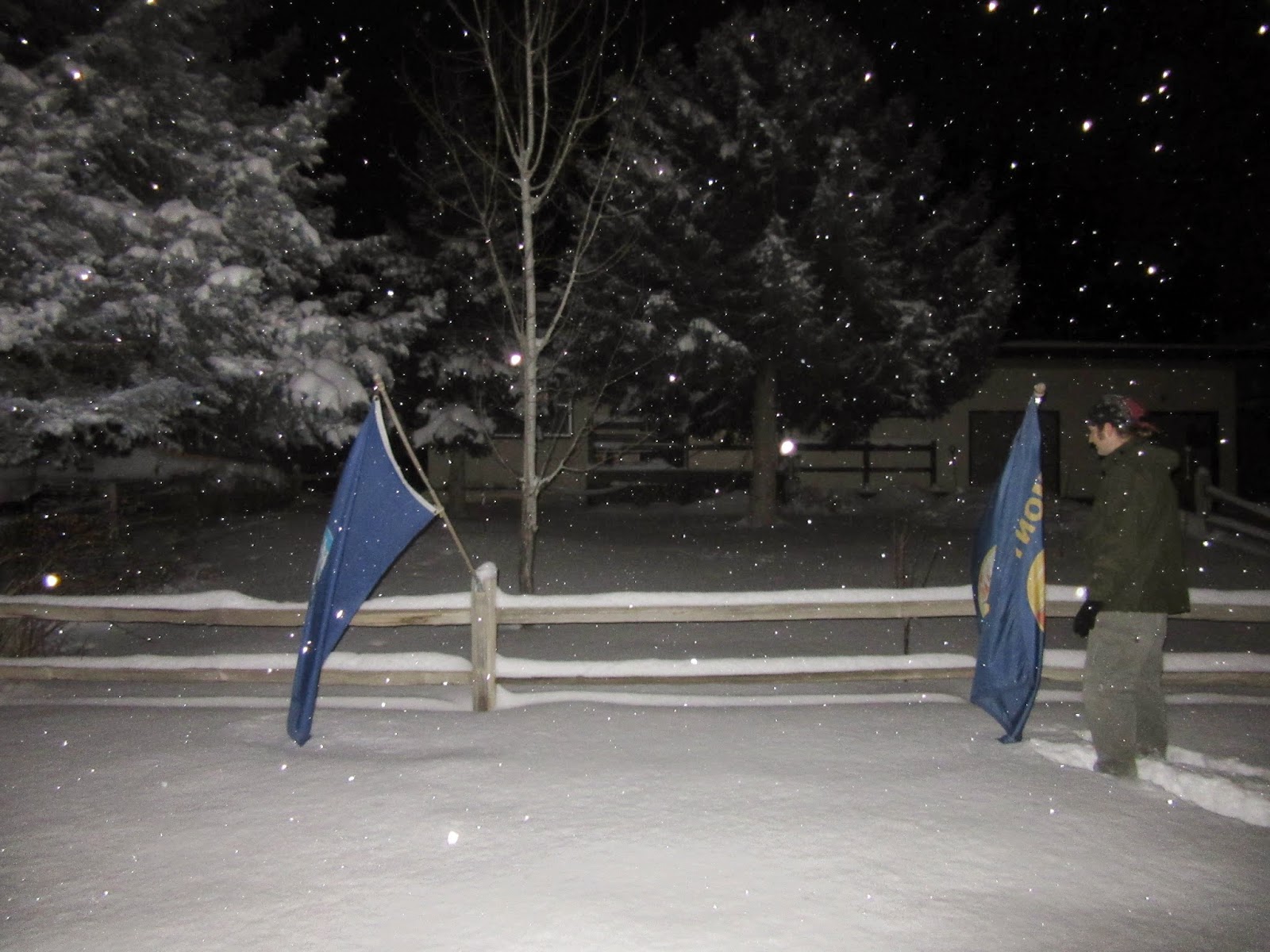 Having snowshoes now makes me happy about the snow in a way I've never been before.  I can related to skier's joy over freshly falling snow.  Its not just a frigid obstacle, but an opportunity for play in nature--in a time when not so many are out playing!  When people were grumbling to me about the snow I was internally thinking, "Yay and I can take out the snowshoes again!" 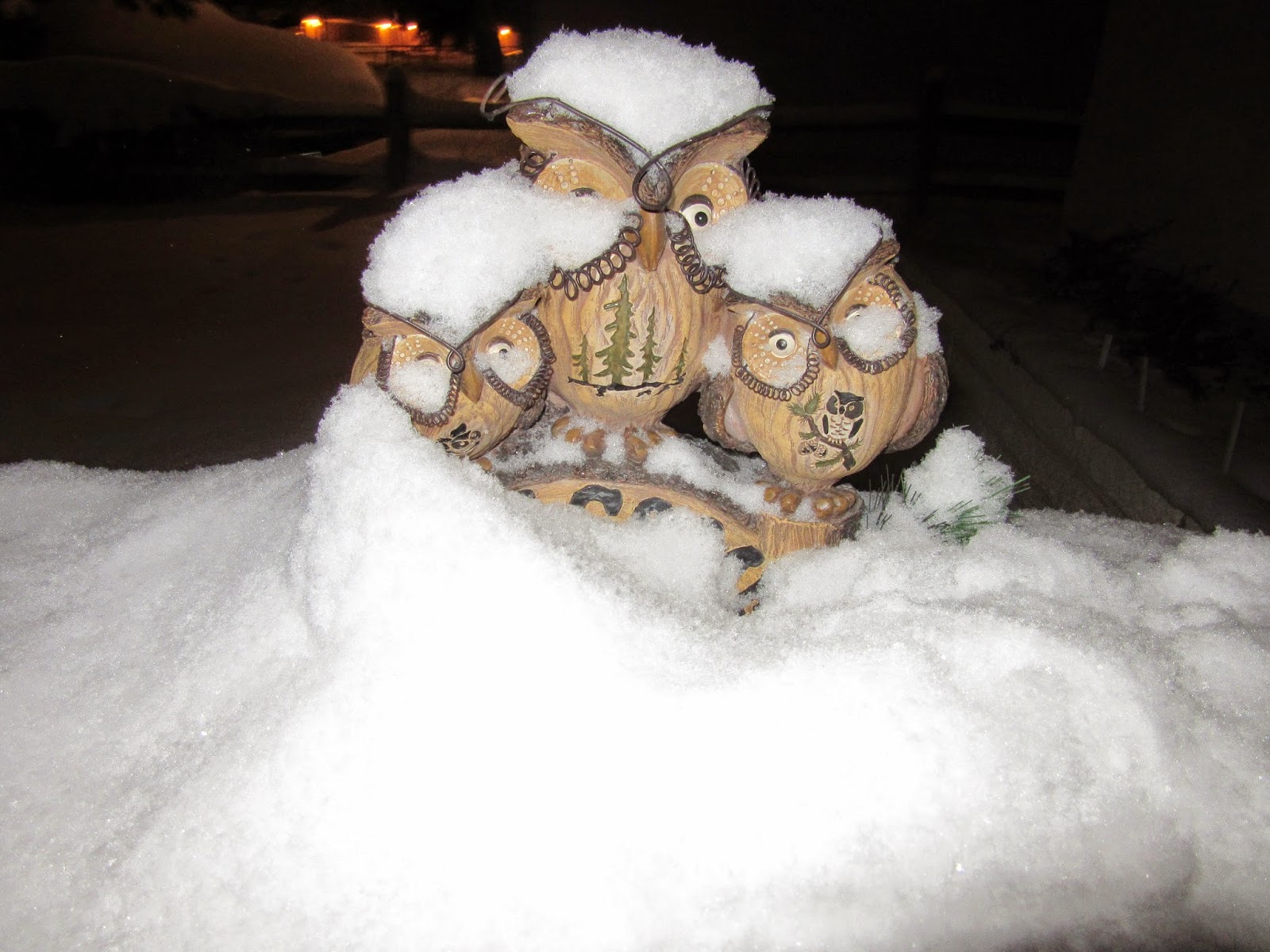