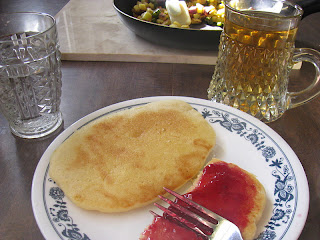 Combine all ingredients together, but just a few times, not well mixed.  You still want it to be lumpy.  Cook over medium on an ungreased pan until bubbles appear on the topside.  Flip.  Cook until the second side is golden.

This recipe can also be used for waffles.  Mix the batter more thoroughly and cook on a preheated waffle iron.

I had to resist really hard not to title them Mattycake's Pancakes.    I don't know why exactly.  I call him Matty, sure, but never Mattycakes.  None the less, it just sprung to mind and now I can't shake it.

Matt is constantly trying to convince me I don't need the recipe card to make these.  "They're so easy," he says.  "Its just one of everything."

That complicates things for me as much as helps.  I am somehow convinced I'll forget which 1 (T, C) goes with which ingredient.  He tries to reason with me. "Yeah, but you would never put a cup of baking soda into anything."  Which I can tell makes sense, but I still don't trust myself, I guess.  So I still use the recipe card.  Just to be sure.

After breakfast this morning I noted that we are just about out of Verna's maple syrup.  Oh, what a sad day that is going to be!  And not too far off!  My step-mother's chokecherry syrup is running pretty low too!

Drat, how the good stuff always seems to go so fast!
By BLD in MT