I made the strangest soup for dinner last night, well, at least the strangest I'd ever made.  But, for all its strangeness it was really quite yummy.  It also allowed us to start whittling away at our stock pile of squashes and use up some pears that were nearing a little too ripe.

The soup was loosely based on a recipe, and I mean loosely, that I found in cookbook called Candle 79 at the public library.  In the end it was too fancy of a cookbook for me, but that makes sense as it is a cookbook based on the menu of an upscale sustainable restaurant.  It called for too many expensive and/or oddball ingredients.  The meals were those strange little towers of food in the middle of the plate that you get at restaurants (look at the cover photo if you don't know what I mean) and that is just really, really not our style.  In my kitchen I just want simple, wholesome food on my plate--not an artfully constructed tower of exotic fare.  I don't mind if that is your thing (and I think I have a sister who would say it is hers).  That is fine.  I may not get it, but I don't mind if you do.  But I would never cook and serve food that way in a million years.  I also would never pay outrageous restaurant prices for it in a million years either.  (So, if someone wants to pay to take me to Candle 79 the next time I mosey over to New York that'd be great, but otherwise you won't find me there.)

That said, I did copy down two or three recipes worth trying...in my own Beth style....without the expensive and/or oddball ingredients.  This soup is the result of that.
Butternut Squash Soup with Caramelized Pears
1/2 teaspoon ground cinnamon
1/2 teaspoon ground cardamom
2 dried cayenne peppers, crumbled up with your fingers
2-4 Tablespoons olive oil
1/2 of a large onion, chopped
2-3 lbs of butternut squash, peeled and cubed
2 teaspoons dried sage
1 inch piece of fresh ginger, peeled and diced
8 Cups water
2 Tablespoons honey
salt to taste

Heat the oil in a large pot over medium.
Saute the onion for about 10 minutes, until softened.
Add all the other ingredients except honey.
Bring to a boil.
Reduce heat, cover, and simmer for 30-45 minutes until the squash is so tender it just about falls apart.

Heat the oil over high heat.
Add the pears and saute for about 5 minutes.
Decrease heat to medium and add remaining ingredients.
Cook for another 10-15 minutes until the pears are soft and the liquid has become syrupy and starts to coat the pears.

Jump back to the soup part now.

To finish the soup add the honey and salt to taste.
Use an immersion blender to process the soup until smooth.
Ladle the soup into bowls and garnish with caramelized pears. 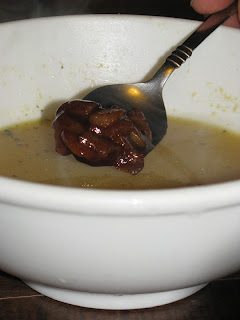 It isn't a combination of ingredients and spices that I'd have come up with on my own, but sometimes, in the kitchen and life in general, it is good to step outside of your known realm and say, "Well, let's just see what happens."
By BLD in MT