I've decided that I just don't think aspens have any business being planted in yards in town.  They are so pretty with their white bark and tendency to grove up and those leaves that shimmer in the wind in a very striking fashion.  But, oh how they take over....which may be fine in a forest, but is a pain when it is happening in my yard.  This would be another of those things I notice all the time now that I have seen it.  Entire yards being taken over by little, six inch tall aspen trees.  Its not just ours.  They're everywhere. 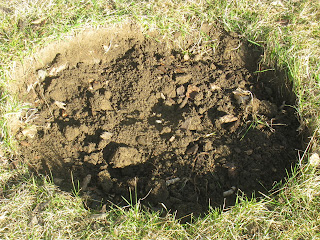 When we bought our house there were seven aspens.  They probably would look really nice all in a little grove, but for whatever reason they were all separate, save two that are paired up.  Another two of them were just the scrawniest little trees, that though tall, were hardly more then sticks.
And so we took some of them out this spring.  Or, more accurately, Matt took them out this spring.  I did little other than photograph it.  We did keep the big one in the front yard and the three big ones in the back yard, including the two that were paired up.  They little twigs though...they had to go.  They were just so randomly placed and not all that striking.  Matt made the project coincide with ripping out sod to expand the garden.  As such, he took all that sod and was able to patch the holes in the yard where the aspens had been. By now, with a summer's growth behind the sod, you'd be hard pressed to find the places in the grass where the scrawny little trees once were.  The yard looks much more open without them and it is a heck of a lot easier to mow without the aspens and their brick edging to avoid. 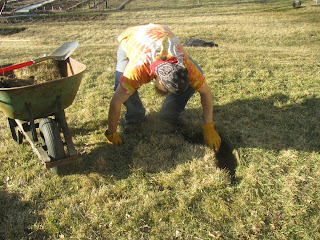 But, we're still fighting aspen seedlings.  We probably always will be.   When we pulled the pepper plants after the first frost I found one seedling that had managed to camouflage itself in the peppers and thus was--though spindly--over two feet tall.  The trees we pulled out were repurposed as part of our bean tepees.