I try new bread recipes regularly.  But, I may have found The One for me...at least for the time being.  I've been rifling through the recipe box and shelf of cookbooks a lot lately.  One of the books, which I realized I'd never really looked at before, was a 1973 edition of the Better Homes and Gardens Bread Cookbook that Matt has had as long as I've known him.  I always use the Beard on Bread cookbook when I am bread making.  I don't know why.  Its not that I think Beard on Bread is the best bread book ever, but that is just the one I always used.  But, no more.  That BH and G book has so many recipes that look easy and wonderful.  It is well written and full of charming and illustrative photos.  Matt tells me I actually like several breads from that book already...I just didn't know it.  The Two-Tone Bread, for example, and the English Muffin Loaf. 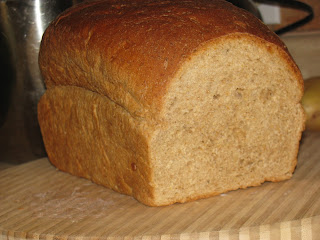 I've made several batches of this bread since discovering the recipe...which originally didn't have seeds in in it, but that we enjoy and thus modified.  I think this will be my go-to regular wheat bread recipe now.  I've been making it with my standing mixer which makes it an absolute breeze, but I've also still kneaded by hand, too.  Both work.  For me it depends on my mood and schedule which route I take.

And speaking of go-to bread recipes I'll also say that the Easy Oatmeal Bread is still by far my favored no-knead bread. 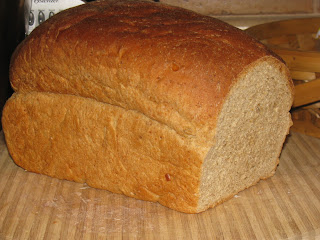 In a large mixing bowl combine 3 1/2 C of the white flour and the yeast.
In a saucepan heat the water, sugar, shortening, and salt until warmed to 115-120 degrees F.  Stir constantly to melt shortening.
Add to dry mixture and beat with an electric mixer at low speed for 1/2 minutes, scraping sides of the bowl constantly.
Beat another three minutes at high speed.
Switch to bread hooks and stir in the whole wheat flour and enough of the remaining white flour to make a moderately stiff dough that is not too sticky.
Set the mixer to knead for 10 to 12 minutes until the dough is smooth and elastic.
Shape into a ball.
Place the dough in a large, lightly greased bowl, turning once to grease all sides of the dough ball.
Cover with a towel and let rise in a warm place until double, about one hour.
Punch dough down.
Divide dough into thirds and let rest, covered for 10 minutes.
Shape dough into three loaves and place in greased loaf tins.
Cover and let rise in a warm place until almost double, about 45 minutes.
Bake at 375 degrees F for 40-45 minutes, covering with foil the last 20 minutes to prevent the crust from overbrowning.
Remove from pans and let cool on wire racks.
Makes three loaves (or two ridiculously big ones, if you like) 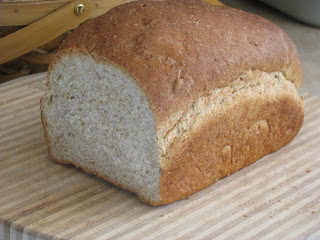