I have missed my blog.  I've missed sharing all the wonderful things I am learning with each passing day.  I've missed reading what all my blog-friends have been up to--they always teach me so much and I get such pleasure from observing the workings of their simple homes.  I've popped on long enough to allow some comments to be posted, but other than that I've been on a computer hiatus since December 12th.  It was very nice, I must say.  Very nice and liberating.  But, in the end, I did miss blogging.  Not facebook.  Not my email.  But, I did miss blogging.  And now I am back with SO much to say.  All in due time, I must remind myself, all in due time.

First, a little December recap is in order, I think. 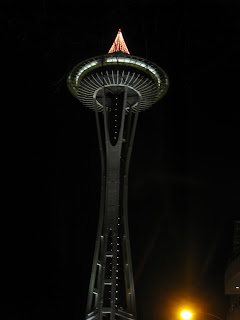 I went to Seattle and visited my sister, Lisa, and her husband and children.  It was a total blast.  We walked, knitted, baked, played games (They introduced me to Settlers of Cataan which I was quite taken with.  Even my non-board-game-playing brother in law likes it!), read books, drank local beer, went out to eat at a 100% vegan restaurant (its been a while since I had so many options to choose from when dining out.  I ate a chocolate tart that was sublime!), explored a nearby cemetery (where we found a librarian bench headstone complete with book to read whilst sitting), went to a potluck, went to church, and on and on.  I got a nasty cold at the very end of the trip which was the only bummer of the whole week.
And then my December sort of went downhill.

In addition to my cold I developed the most retched stomach bug of my life which laid me out for a full three days.  The three days I was supposed to be at the library before we closed for the remainder of the year.  I knew I had work to do since I'd been gone for a week already, but there was no arguing with my very cranky tummy so I stayed home.   Matt was an excellent attendant.  He even got me a lemon-lime soda just like my mom used to do when I was little.

Then, on the fourth day, I was finally able to eat food more solid than broth.  Things were looking up and I had actually just told Matt I thought I might actually be able to drum up some Christmas cheer.  (Matt had been making Christmas treat which I was too sick to eat all week.)  And then my mother called to tell me she was at the hospital because my step-father, Brad, (who was only 55) had passed away unexpectedly.  Her sad voice just broke my heart.  I wanted to hug her right then and there.  So, what else could I do, but run around the house gathering just the bare essentials and jump in the car for a spontaneous drive over to Bozeman to be with her.    (My sister Sarah did the same, but had a much longer drive so she didn't arrive until the middle of the night.)  Boy, it made the severity of my cold/flu affair seem much smaller in the grand scheme of things.  Sick as I may have been I still had so much to be grateful for, it could have been so much worse.

Needless to say, it was terrible.  Such an unexpected death would certainly always be terrible, but it seemed all the worse coming just a few days before Christmas.  It kind of stole the Christmas cheer.  But, we did all carry on, as that is all you can do.  My sister changed plans so she and her daughter could be with my mom for the actual holiday.  Santa came.  Holiday movies were watched.  Food was shared.  Church was attended.  Christmas music was played.  Keleigh and I painted handy-craft kits she'd gotten under the tree.

And then there was a beautiful memorial service, complete with a firefighters honor guard which Brad, who was a fireman for more than 20 years, would have just loved.  It was perfect.  My mom and step-sister both made lovely eulogies that made us both laugh and cry.  I was really impressed that they were able to make such speeches, too.  I think it would have been so hard.  But, they both really wanted to do it.  They had things they wanted to say and I am so glad they were able to.  A huge number of people turned out and stayed for a potluck meal afterwards.  Brad had lived in the same town his entire life and had made quite an impact on a lot of people.  I still cannot quite believe he is gone. 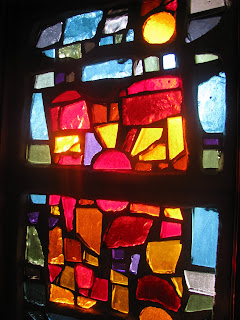 The positive side of all of this was we had an impromptu family reunion of sorts.  My grandparents, aunts, uncles, cousins, and dear family friends all gathered together to celebrate Brad's life and support my mom during this time.  It made me so happy to see them all and I know it was meaningful to my mom.  My cousins and I swapped stories from years past.  We sang the family song.  My aunts taught me a new board game.  My mom's best friends (who live way across the state) came and it was so great to hear them make my mom laugh.  We all deeply regretted the reason we were together, but we tried to make the most of it.  We tried to continue living with joy in the midst of sorrow.

Matt and I stayed at my mom's for several days after the service to help her with things.  Moving the four-wheelers out of the garage so my mom could park her car in there (Brad had always cleared off the snow and ice and warmed it up for her before so they'd never used the garage for cars), cooking and serving meals, cleaning, hugging, rubbing feet, organizing her craft room (which had gotten a little out of control), getting the mail, and whatever else we could do to help.

Matt and I, both sort of wiped, decided to just have a quiet New Year's at home alone.  We drank some of our first batch of homemade beer and made pizza.  We took a nice, long soak in the hot tub.  We cracked a bottle of sparkling grape juice at midnight, had a cupcake, and promptly went to bed.
So, that was December.  It didn't really go at all like I planned.  But, that is life, I suppose.