I like to draw.  I like to play games.  I like to spend time with my friends.  Combine the three and I really am in heaven.

Some time ago now I was reminded of a game I hadn't played in while--Exquisite Corpse--by my friend Chelsey.  We'd intended to watch a movie, but in the end just played games.  No complaints here!  I love games with my friends!

We played some telephone pictionary--always good for hoot.  And then Chelsey mentioned Exquisite Corpse.  I had completely forgotten about that particular drawing game.

The premise is that different people take turns drawing a part of a body (head, abdomen, waist to thighs, and knees to feet).  The part they drew is then hidden from view and another person add the next body part.  The result is a wonderful mish-mash of a person/creature.  Its really interesting to see the different ideas people get.  Its always so varied and fun to look at when completed. 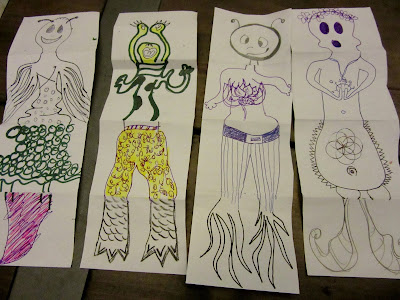 How to Play Exquisite Corpse:
All that is needed in order to play is a piece of paper and a writing utensil--different colored pens/markers can be a bonus, but isn't required.

Give each person playing a strip of paper and allow the pens to be accessible by everyone.

Starting at the top have everyone draw a head in the first box.  Include the neck, which should just overlap into the square below the first.  When the head is drawn to completion (or a designated amount of time has passed) fold the head square back so that only the neck part is visible.  Pass it to the player next to you. 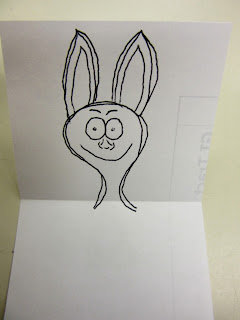 In the second square have everyone draw the abdomen part of the creature, ending with the waist just sticking out into the third square of the paper.  Fold it back so that both the head and abdomen are hidden and pass the drawing on to the next person.

In the third square have everyone draw from the waist to the knees.  The lines for the knees should again stick out into the last empty box on the paper.  Fold it back so that the three previous sections are hidden and pass the drawing to the next player.

In the last blank square have everyone draw the knees and feet--or flippers or claws...

Unfold the papers and enjoy the silly works of art!  They also make fun bookmarks.
By BLD in MT