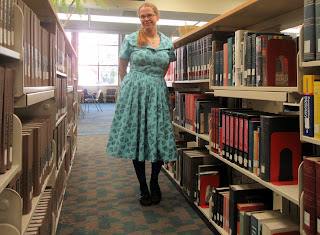 For my 20th homemade dress I decided I should do something special.  I thought a unique dress was in order, not more of the same pattern (2174) which I make over and over and over.  Don't get me wrong.  This dress is just about perfect for me--so much so that it has essentially become my uniform...which makes it hard to invest time and energy into something else.  What if it didn't work out?!  What if I didn't like it as much?!  I eventually realized that I was probably just pigeonholing myself, both stylistically and in my sewing skill-set.  So, I decided that Dress #20 had to be something different.
I waited until Simplicity patterns were on sale for $.99 at Jo-Ann Fabrics.  I bought two new patterns with the 20th dress in mind--not at all sure when I'd get around to actually making said 20th dress.  One pattern (1800) is so similar to My Dress that, while I am sure I will love it, I ultimately decided it just wouldn't do for Dress #20. 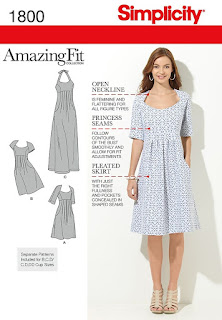 The other pattern was this one. 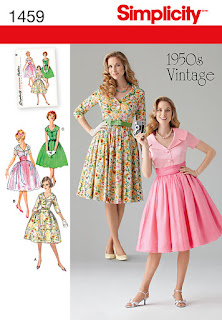 Instead of just coasting with what I know (er, that would be the 2174) I realized I should see it as an opportunity to branch out and learn a new skill or two and maybe challenge myself.

I'd been eyeing the Simplicity 1950's vintage remake pattern for some time online, but always brushed it off as not-the-sort-of-dress-I'd-make.  It has no pockets and has darts for heaven's sake.  My only previous attempt at darts went terribly.  So terribly the dress remained less than half-made and squirreled away in the sewing room closet for the last couple of years.  I don't think I've ever made a dress without pockets before, except that Little House Halloween costume, which I don't even count as one of my dresses, since it hasn't migrated into everyday wear.  The 1459's full skirt is lined, which intrigued and intimidated me.  The few skirts/dresses which I own that are lined are quite nice.  The drape and flow is lovely, even with leggings underneath.  But, it wasn't something I'd ever tried before.  There were button holes and a fabric belt to make, too!  Lots of new or almost-new territory for me. 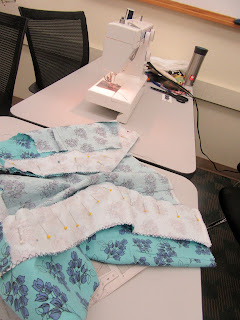 And so I plunged in.  Conveniently my mom was in town and helped coach me through making darts.  She had some tricks (like Tailor Tacks) for me that really, really helped even things out.  The darts aren't perfect, but they're close enough. 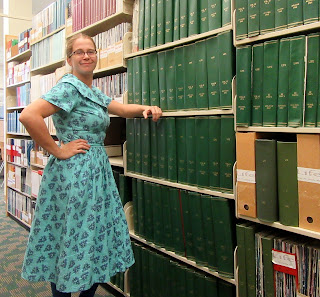 I finished it this past weekend at a sewing retreat I attended with my moms (my mom and Matt's mom) and some friends.  It turned out very well.  I adore the full skirt, especially.  Oh, how it twirls!!  I cannot wait to go dancing. 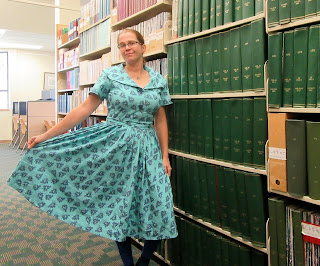 I had to adjust the sleeves for my "heavy" arms.  This is the term used in my pattern alteration book.  I just winged in on the matching fabric belt and probably should have used a stiffer interfacing as the belt gets folded and wrinkled from my sitting down.  Lining the skirt was a snap and I think I shall have to line my skirts from now on.  I ended up sewing the button placard closed.  I quite dislike gapping between button holes and this dress really could stand three buttons, rather than the suggested two, I think.  Live and learn.    The buttons matched the dress swell.  They even look kinda vintage.  The huge, wide collar is a lot of fun, if you ask me. 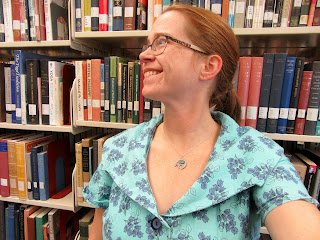 This is the first time I've had to go shopping for dress making supplies in order to complete a project.  I think, possibly the first time ever.  I get everything gifted to me or pick it up randomly at garage sales without a specific project in mind.  I actually had to set out for matching buttons and lining fabric this time though.  Even still, it was a dress that cost about $10. 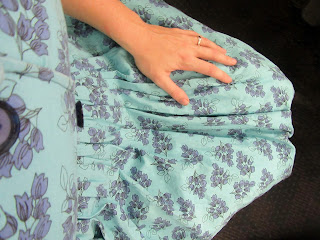 Honestly,  I don't know that I'll make the pattern again.  However, I am going to take things the pattern taught me and run with it.  Things like, lining skirts and making bodices with darts.  I might make a mash-up dress with a 2174 bodice on a twirly 1459 skirt--with pockets!  The world is my oyster.
By BLD in MT