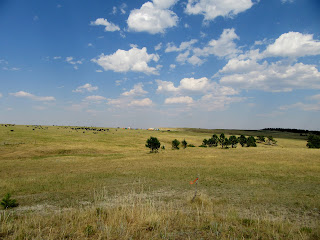 The tooth was both longer and thicker than my thumb.  It had been unearthed just a week ago after spending the last 150 million years tucked away underground--preserved at first in mud and then in stone.  The tooth is the first example ever found from a haplocanthosaurus.  The very, very first in the whole wide world--that we know of, at least.  I held it in my palm in awe.

Whoa.
For the past few years I've been assisting a geologist in obtaining theses and journal articles for his research projects.  He calls me his "research assistant," a title I am very keen on actually.  This summer he invited me out to the dinosaur excavation site he's been working on for the past six years along with his partner, an area paleontologist.  He wanted me to see how the information I was obtaining for him related to the work he was doing out in the field.
So, for two days I worked alongside amateur dino nuts and professional and student paleontologists on the excavation site.  I thouroughly enjoy being surrounded by people so clearly passionate and excited about something--even if I don't quite reach their level of enthusiasm.  Their delight is just about contagious.  Some of these people had come from far, far away--Germany, New Jersey, Georgia, California, Texas, etc.  They'd talk dinosaurs for hours on end.  I mostly listened and absorbed as much as I could.  Their depth of knowledge was staggering to me, a rather casual participant in the whole paleontology arena.
At the quarry I learned the basics of excavation.  I dug and hauled buckets and buckets and buckets of rock.  I was taught how to carefully build a plaster case around the bones and then watched as they were "rolled" and removed from the site so they could be sent to the lab for further study.  I observed bone mapping in which the interns methodically drafted beautiful renderings of how the bones were arranged in the ground.  This map will be used back at the lab, too, in trying to sort out and reassemble the collected specimens.
On the second day I even found one rather small piece of bone making all the digging certainly more than worthwhile.  Small though the fragment was it was rather staggering to realize I was the very first human to ever lay eyes on it.  I'd been quite nervous that I'd not know a bone when I saw it and just toss it out in my discarded rock bucket.  The team kept reassuring all the new diggers, myself included, that we'd know--and they were right.
Whoa.
What a delightfully unexpected opportunity!  Never in my life would I have expected the chance to dig dinosaur bones to just fall into my lap this way.  I learned so much and had such a pleasant time.
It was cool.  Just really, really cool.