I am not a food blogger.  That accounts for all the  fairly shoddy food photos and loosey-goosey "recipes" I share.  Food is a major player in my life and I am keen to share my favorite dishes and techniques, but it is not the primary focus of my blog.  It is but one facet of voluntarily simple life I lead.  This is what I tell myself so I can just snap a halfway decent photo and call it good enough for my purposes.  I blog about food.  I'm not really a food blogger.  😉 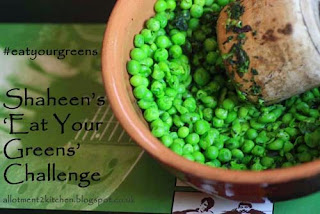 One of my favorite actual food bloggers, Allotment2Kitchen, co-hosts (along with the Veg Hog) a monthly recipe round up called Eat Your Greens.

The strand that runs through this challenge is that all dishes must be vegetarian and highlight at least one yummy, healthful, and beautiful green vegetable.  While I usually drool over the recipes shared I don't typically participate more actively.  This month I am over the moon to join in though because I've am equally over the moon about this fantasmagorical meal--coconut breaded cauliflower tacos with spinach and a cilantro-avocado-lime sauce.  This new suppertime favorite features a variety of green color, though lime and avocado are certainly fruits and thus fail to meet the requirements.  Spinach and cilantro round it out nicely though.

The coconut cauliflower came to us first--inspired by a recipe for fish tacos.  (Fish tacos being something neither Matt nor I have ever eaten during the omnivorous phase of our lives.)  The recipe is presented in classic vague Beth style.  It isn't complex to make--just amazing to eat--and so I see no reason to bother about the recipe in greater detail.  No matter how many florets we prepare we seem to crush them all.   Consider yourself warned and just make a bunch. 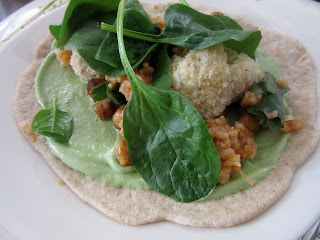 The cauliflower is superbly divine in its own right, but it is the avolime sauce which really seals the deal.  And I even managed to come up with a fairly respectable recipe for that one, as it happens.  Oh, baby!!!  I could eat it with a spoon...and I'm not even all that smitten with avocados usually.  It is particularly excellent on tacos, enchiladas, toast, salads, and breakfast scrambles, but really, the possibilities are endless. The sauce will remain good in the fridge for at least a week, but maybe more.  I've never had it stick around longer than that so I could find out! 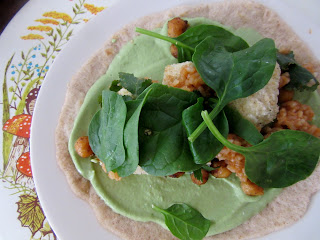 Place equal parts flaked coconut and panko in a food processor, start with maybe a cup of each, depending on how much cauliflower is being breaded.
Pulse the coconut and panko until they're in rather small and uniform bits.
Pour the coconut milk into a bowl with a pinch of salt and a few grinds of fresh pepper.  Additional spices can also be included.  Cumin is a really nice touch.
Dredge cauliflower pieces through the coconut milk until well coated.  The coconut milk is just thick enough that it clings to the surface of the cauliflower quite well, in addition to adding some extra decadence with the rich coconut flavor.
Dredge/toss in the coconut-panko mixture until well breaded.
Bake at 375 degrees F until starting to turn golden brown on top, and tender all the way though when pierced with a fork.  Start with 20 minutes. 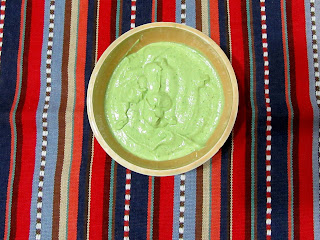 Soak cashews in a large bowl of room temperature water for about 8 hours.
After the allotted time, drain and rinse the cashews.
Combine all ingredients in the blender and process on high until a thick, creamy, almost mousse-like sauce is formed.  (A high speed blender, like our Vitamix, really makes it quick and easy to maximize the creamy mouthfeel.  If a high speed blender isn't an option soaking the cashews longer will help.)
Add water in small quantities, if needed, to achieve the desired consistency.  (Thinner for salad dressing or drizzling over enchiladas and thick for spreading on toast or as the base layer in a taco.) 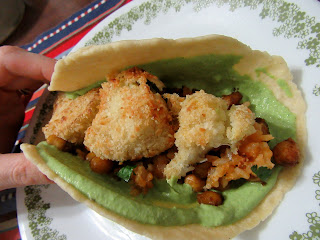 A typical taco for me might include:  A fresh tortilla spread with a layer of avolime sauce followed by a good scoop of beans, some seasoned rice, three or four coconut cauliflower florets, and a big handful or two of spinach.

Matt made these tacos for Valentine's Day since he knows I adore them so.  It wasn't three days later before I was proposing them again for lunch.  He's been making fresh tortillas to boot, and seriously, these tacos are epic!!  I am in food love.  Here is hoping the other Eat Your Greens readers swoon for it as hard I do!
By BLD in MT