Ginger is partial to Friskies Party Mix cat treats.  She's oddly snobbish about this for such a rotund feline.  She will put her nose up at basically any other treat.  I don't get it myself as they seem nearly identical to her daily food, but whatever.  Tastes are really personal--for cats, as well as humans.

A couple months ago we picked up the "Gravylicious" variety.  She doesn't care what flavor so long as it is Party Mix.  This was Party Mix infused with gravy.  What's not to love?!?

Ginger is a big fan, but the packing bugs me.  Their slogan is "The crunch of Gravy in EVERY BITE!" That just doesn't make sense.  Or sound appetizing.  I mean, if your gravy is crunchy I gotta feel you're doing something wrong.  ...crunchy gravy?  Just gross...

Then yesterday I got a blueberry Bai antioxidant drink (as a less processed alternative to my soda habit) and the packaging read, "Juicy flavor that tastes like a rainforest just kissed you on the lips." 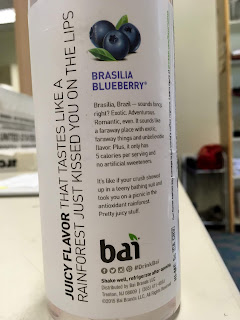 I mean, when I think of rainforests a lot of things come to mind.  I mean, sure, I think beauty and trees.  But--first off--I don't go around kissing trees, no matter how pretty.  (Though I do occasionally hug them.)  Secondly when I think of the rainforest a lot more than trees comes to mind.  I also see insects, monkeys, frogs, humidity and mugginess, insects, snakes, slugs, vines, and did I mention insects?!?!

And I want none of that near my mouth.  Not really at all.  Gross.  And maybe they just wanted me to think WET--really, really wet.  In which case, I never was much of a fan of sloppy kisses....so still gross.

I never once thought BLUEBERRIES when I visualize the rainforest either.  But, maybe that is just me.

Doritos (another of my guilty pleasures) came out with a new variety in January this year that, unlike most of their line, doesn't contain milk.  It is called Blaze and it is spicy.  I was excited since I do love me some spicy food.  So, I bought a single serving bag back to give them a try.  As I was tearing open the bag I noticed the tagline:  "It's like licking a volcano." 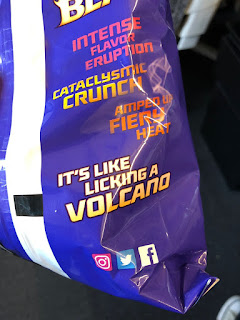 And I thought, "That doesn't sound very enjoyable..."  It sure didn't sound like something I'd sign up to pay for willingly.

And they were, indeed, far too hot for my liking.  Turns out--surprise, surprise-- licking a volcano is just as stupidly hot and unpleasant as one might imagine (this is all the more interesting to me given all the global volcanic action as of late).   There must be people that DO want lick a volcano though since its June and they're still on the shelves.  To each there own, I suppose.

And then there is this advertisement from a recent concert program. 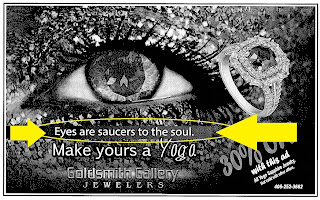 But, they've all been good for a chuckle and a head shake.
By BLD in MT