Another year is behind us and so I'm clearing my blog sidebar and starting a new year of reading.  I've spent a bit of time over the past few days ruminating on my literary patterns and goals and reflecting on the stories that were painted in my mind last year.  These annual reading reports are a happy marriage of my infatuation with personal stats and my obsessive reading habit.
Goodreads is my enabler.  😉

This was the first year since I started tracking that I completed more adult books than audiobooks.  That was a loose objective that developed this year--trying to cut back on the audiobooks and use my eyeballs, turn more actual pages.  It was, apparently, successful.
There were five titles that I read twice last year.  So, my list is actually only 122 unique titles.  The five books I enjoyed enough to read twice were:  Harry Potter and the Sorcerer's Stone, Harry Potter and the Goblet of Fire, The Witch's Vacuum Cleaner and other stories, The Mincing Mockingbird's Guide to Troubled Birds, and The Little Book of Hygge.  Harry Potter is a force in my life.  I am so enthralled with the story, just as much now as the first go-round.  I love it.  Just love it.  I am almost certain it will appear again on my list for 2019.  I, er, may have already started book one this week.  Maybe.  Just a little.  😁 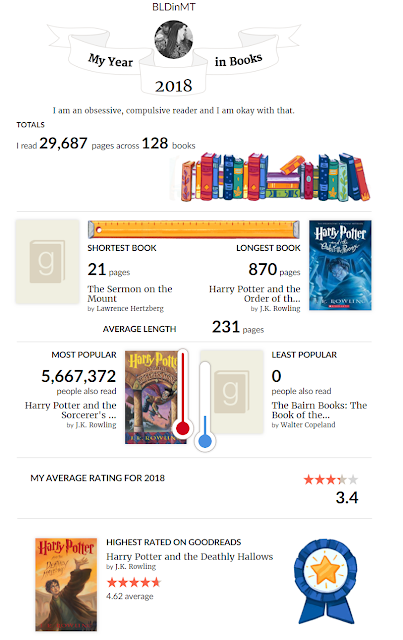 As always, it was hard to narrow down my top ten, but here goes:

Top Ten Reads of 2018 (in no particular order)
The Grapes of Wrath by John Steinbeck
The Adventures of Tom Sawyer by Mark Twain
The Harry Potter series by J.K. Rowling (again!)
Fight Club by Chuck Palahniuk
The Botany of Desire by Michael Pollan
Beauty Queens by Libba Bray
The Total Money Makeover by Dave Ramsey
The Little Book of Hygge by Meik Wiking
The MaddAddam series by Margaret Atwood (again!)
The Witch's Vacuum Cleaner and Other Stories by Terry Pratchett
My least favorite book last year was one of the Newbery winners--Shadow of a Bull.  It was too hypermasculine and bull fighting is just not a cultural relic that I can appreciate so it really had very little to appeal to me as a reader.  It is a book I'd have never picked up if I weren't on this Newbery kick.

Only one single Newbery Award book--Island of the Blue Dolphins--made a five-star rating with me last year.  Most land in the three star or four star rank.

I was pleased to note that between 2017 and 2018 I reduced my volume of one and two-star books while simultaneously increasing my number of four and five-star books.  I've been trying to be a tad more selective and thoughtful when I choose my reading material.  I used to just grab any ol' thing that crossed my path at the library.  The star ratings indicate that this also has been a successful endeavor. 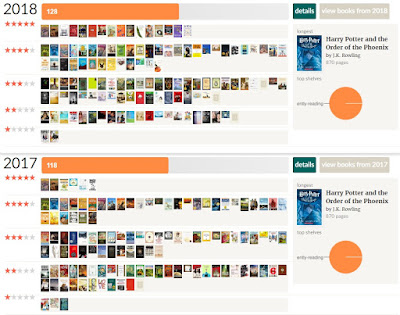 I set myself a few literary objectives for 2018 and feel they were well met, for the most part.
My goals for the new year are to carry on with the 50-States-Challenge and the Newbery-Winners-Challenge, hopefully bringing at least one of them to completion.  I will also take part in Summer Reading again.  I will try to read more books than I listen to.
Below is the full record of the books that I read in 2018, listed in reverse order with the most recent at the top of the list.

Books Read (and Listened To) in 2018.
* indicates an audiobook
And since, as previously established, I get a kick out of personal stats and people are perpetually surprised by how many "great" movies I've never seen I again kept track of the movies I watched last year.  It was actually quite a lot for me with a grand total of 29.  I finally decided to watch the Harry Potter movies which bumped up the numbers considerably--accounting for ten of them.  I'd hoped it would temper my burning desire to read the series again, but it actually had the opposite affect.