I read books every day, even if it is just a few minutes before bed.   Usually quite a bit more though.  During my recent holiday break I easily read for a few hours every day.  I always have a book going, but more often I am reading several simultaneously.  I don't find it tricky as long as the plots don't overlap much.  Say, only one story with wizards or queens or talking rodents at a time.
Over the span of 2019 I read 130 books.  Looking back I am pleased with the lot.  They were a solid assortment of kid's books, YA books, adult books, audiobooks, print books, fiction, non-fiction, poetry, and prose. 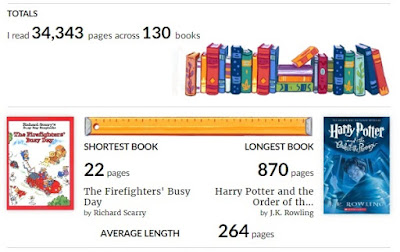 One thing I am celebrating this year is that I didn't read any truly bad books.  None earned a one-star rating from me.  A first!  I'm quite pleased with that.  That's two years in a row that I've improved the quality of my reading choices.  Hooray!  Quality over quantity!  [Or both, at least.] 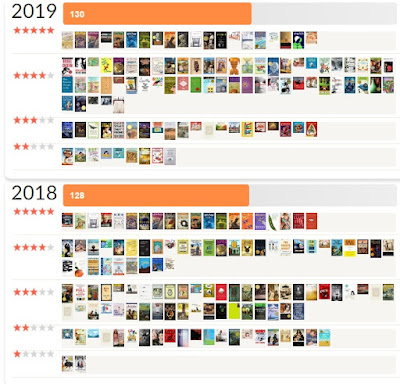 Interestingly, one of my lowest rated book--Speranza's Sweater which I gave two stars--was the highest rated overall by other Goodreaders of my 2019 titles.  This just goes to show that just because something is popular with the masses doesn't mean it will be popular with me.

Among the books I read last year, the first Harry Potter is still the most popular by total Goodreads count.  At almost 6.5 million people, there were almost a million new readers during 2019 though.  I think that is pretty dang impressive.  I mean The Sorcerer's Stone was published more than twenty years ago!

I've said it before and I'll say it again:  Harry Potter is a force.  More on that to come, actually... 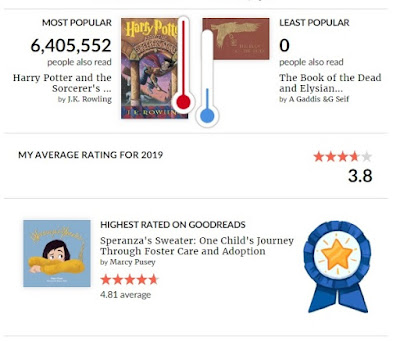 As always, it was tricky to pin down my favorite reads for the year, but here goes:


It was so tough to pick my top ten, actually, that I ended up with an almost equally long list of Honorable Mentions:

If I had to pick a least favorite it would probably be Fear and Loathing in Las Vegas.  I found that book...let's say...challenging.  But even it was still "okay."
2019 Annual Stats
Number of young adult or children's books:44
Number of adult books:24
Number of audiobooks (both adult and YA/children):61
129 Total Books (compared with 128 total books for 2018)

There were books I read more than once during the year (namely Harry Potter and David Sedaris) so it is only 105 unique book titles.

I will carry on with a few reading objectives this year.

While I hope to focus on more non-fiction reading this year, I really only set one true goal for 2020.
Below is the full record of the books that I read in 2018, listed in reverse order with the most recent at the top of the list.
I ended up watching 33 movies this year, listed below.  That's a lot!  Four more than last year...which I also thought was a lot.  Once again, those gall dang Harry Potter movies are a major contributor, being almost 1/3 of the list right there.  I finally watched Back to the Future (and its sequels).  This was one of those movies (like Goonies) that has a tendency to make people goggle at me when I report that I'd never seen it.  They were pretty entertaining, too, especially the first and third ones.  Maybe this year I'll finally get around to Goonies.