I am a very cookbook oriented person.  (This dovetailing nicely with the fact that  I am a very food oriented person.)  I love pouring over recipes--examining photos, gleaning ideas.  I already have two shelves of cookbooks in our home library.  Of course, that doesn't stop me from checking out loads from the library or requesting review copies from Blogging For Books.  I especially love cookbooks featuring foreign cuisine.  Asian flavors are probably my favorite genre of foods.   Last year I went on a bender of checking out just about every Asian cookbook which I could lay hands on from the public library.  Chinese Five-Spice Powder kept cropping up on my cookbook reading and I'd never tried it.  I asked Matt to pick us up a jar so we could give it a whirl.  Eventually I suspect we'll just make our own, but for now the commercial version has been a good way to get our feet wet with this new seasoning.  And a little goes a long way, really, so this jar will be with a while yet.

Typically Chinese Five-Spice is comprised of star anise, cloves, Szechuan peppercorns, fennel seed, and cinnamon.  It is a bright, spicy, bold flavor with just a hint of sweetness from the anise and cinnamon. 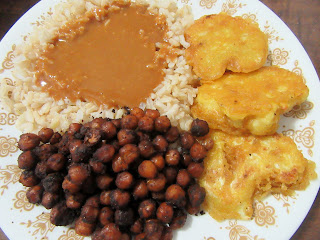 This recipe is my current favorite of the five-spice concoctions experimented with thus far.  The melange of spices tastes friggin' great and the chickpeas get a swell chewy texture from the roasting.

Toss chickpeas with remaining ingredients until well coated.
Arrange on a baking sheet in a single layer.
Bake at 400 degrees F. for 20-25 minutes, stirring half way though if you're feeling ambitious.
The recipe makes plenty because Matt and I tend to nibble them up rather quickly.  A half a batch might be sufficient for some people though.  The flavorful, chewy chickpeas work super as part of a main meal, but also make for splendid snacks at home and on the go.  Not to mention the fact that the recipe s superbly simple and quick to whip up.

Add five-spice powder to the perpetually increasing list of Asian flavors I adore.  Mmmmmmmmm....
By BLD in MT