Do These Eye Spots Make My Head Look Big?!

I'm perpetually honing my naturalist skills.  There is so much to learn (to appreciate, admire, understand, marvel at) about the natural world!  The more I study the more I discover I've barely scratched the surface.  Birds we've got pretty well on lock down visually, but would like to be better at birding by ear.  And then there are flowers and trees and bushes and mammals and reptiles and fungus and berries and fish and.... 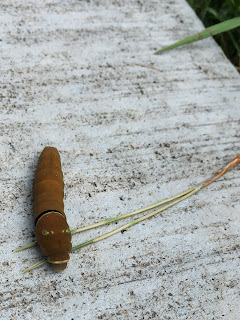 Since I spent most of my life recoiling in horror from things of the creepy, crawly nature, this is an area in which I am not well versed.   So, I was pleased to discover this search engine which helped me speedily narrow down the possible suspects when I happened upon this rather adorably menacing caterpillar strolling down the sidewalk.

I popped in that it was Brown, Banded, and had No Hair....and then I just had to compare between six different species (three of which were different Tiger Swallowtails) from their database of almost 177 species.  Further research and examination of range maps leads me to conclude it is the Canadian Tiger Swallowtail. 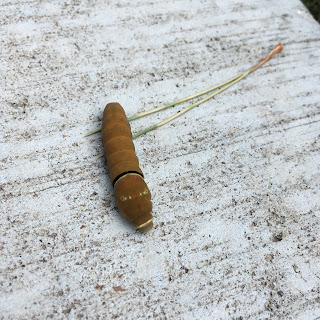 I couldn't help but be impressed by the dramatic head exaggeration that the larvae uses for self-preservation.  I mean, just look at her with those large, surly yellow "eyes" and the black and yellow neck band to accentuate "head" size.  When, in fact, the whole head is actually the very small bit at the front, separated by the slim gold band.  ...the gold band which doubles as an excellently oversize looking "mouth."

Of course, humans aren't too far off track when it come to this illusory costumage  thing. I can see a real similarity to our use of eye shadow, mascara, Spanx, and padded bras.  For different reasons, of course, but still...the similarity is there.
By BLD in MT