Peanut Butter Dates - And an Impulse Purchase at the Farmer's Market

Once upon a time I went to a birthday party vegan potluck.  One of the offerings was an utterly simple little bite-sized nibble:  a date stuffed with peanut butter. 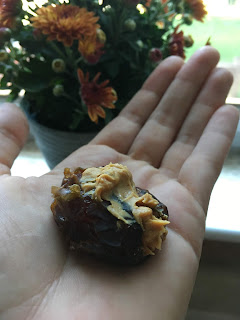 It didn't repulse me or anything, but I also can't claim that it made me drool at the sight of it either.  But, someone at the party insisted that I "had to" to try them.  It looked plain and I didn't care much for dates so I was reluctant.  But, I'm polite--generally speaking--and so I agreed to give it a go and plunked one on my plate.

Thank heavens I let them talk me into it!  Oh, my goodness!  I was not prepared for how well those flavors combined on my palate.  The intense sweetness of the date coupled with the salty savoriness of the peanuts was just a stupendous match.  It was love at first bite, as the saying goes.

This past weekend Matt and I scored an unusual treat at our local Farmer's Market--fresh dates.  The dates had been picked just five days prior and were so gooey and tender they just about melted in the mouth.  The flavor was excellent, but it was the texture that really sold me.  I'd never had such a creamy date.  This is certainly one of the instances where even if the stored version from Costco is perfectly fine, fresh is just world's better.

A woman who grew up near here but now lives in California brought them back to sell at the market while she was in town visiting her family.  She had two kinds of dates--the standard Medjool and another I'd never heard of (and the name of which now escapes me).  They were fabulously different, but both totally spectacular.  They even had a branch from one of the trees so we saw how the dates look as they're still attached and growing.  Neither of us had ever seen that before.  So, between the coolness factor, the novelty, and fantastic quality of the fruit we brought home a container of the sweet little gems.  We just had to. 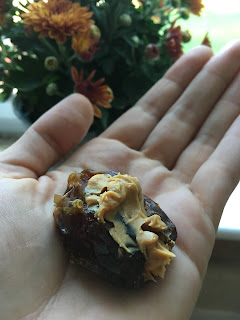 And I've been stuffing them with peanut butter all week.  I've got two packed for a mid-afternoon snack again today.  Even just one is surprisingly filling and satisfies my sweet tooth in a way I can totally embrace.

Yum.  Gosh, I hope the date woman (and her hilarious, bubbly daughter) are still in town.  I should have bought more.
By BLD in MT