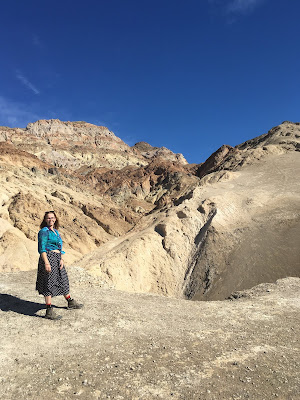 They really know how to name things in Death Valley.  Case in point:  Desolation Canyon.  Sounds beautiful, don't you think?  Okay, maybe not.  But it certainly was, despite what the name might conjure up. 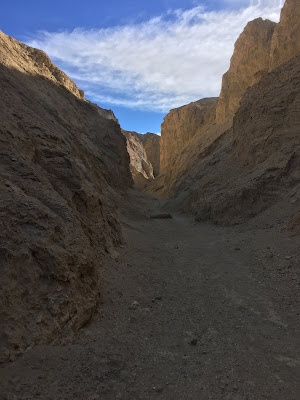 We hiked this canyon on our final day in Death Valley.  It would prove to be our favorite day of hiking over the course of the trip, in fact. 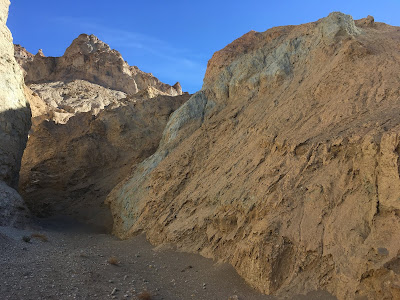 The serpentine twists and turns of the canyon created a never ending series of surprise sights and wonders--what will it look like around THIS corner, and THIS one, and THIS one.  The rocks were gorgeous and so wonderfully varied in texture and color as they towered up toward the big, blue sky.  Like Bryce Canyon, it would have been a hell of a place to lose a cow.  So many side canyons! 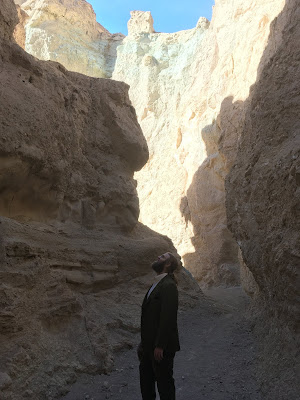 Hiking in Desolation Canyon (and much of Death Valley, actually) was like hiking on another planet. 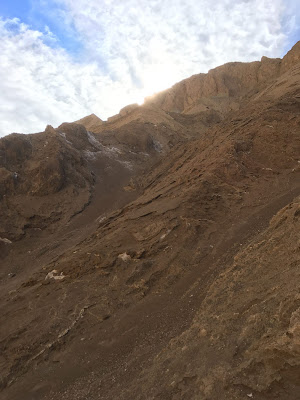 I'll just sidebar here to say, since I don't deem it common knowledge, that portions of the Star Wars movies were actually filmed in Death Valley.  Desolation Canyon is one of several such locations.  So, it really is like another planet.  So much so, in fact, that Hollywood has used it as such.  As we trailed the halls of the canyon we decided there and then that when we come back to Death Valley we're going to hike dressed up as Star Wars characters.  It is hard to explain, especially since we're not Star Wars dorks, but:  We just have to. 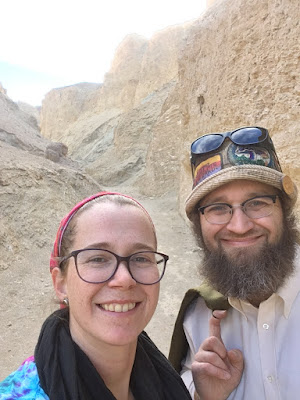 Desolation Canyon is about a 3.5 miles walk, out and back.  In addition to fab canyon views the whole way the hike culminated in a fantastically sweeping viewpoint as the trail winds out of the canyon to an elevated ridge.  The trail starts from a broad washplain at the foot of the canyon and narrows as it winds away from the salt flats up into the hills.
The trailhead is just a short drive off the main Badwater Road on a very accessible road (not a given in Death Valley, let me say!).  We actually had a picnic with Memo and Jess at the trailhead during the first couple days of our trip.  We hiked the more enticingly named Golden Canyon that day though, unintentionally saving the best for last. 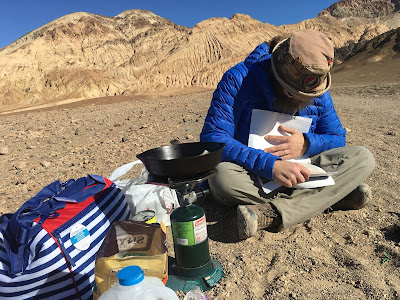 There are a couple of points on the trail that required a bit of, if not climbing, let's say scrambling.  This was easy-peasy on the way in and just slightly less so on the way back out.  I've always found it more straightforward climbing up things than climbing back down though.  These small scrambles were a lively bit of interest, something we don't usually encounter since we're more mountain hikers than canyon hikers.  We thought it was pretty neat. 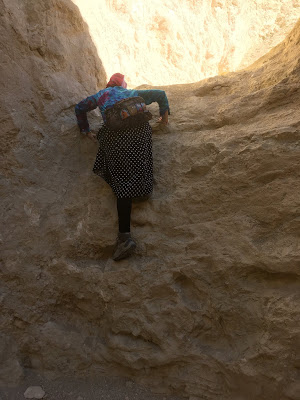 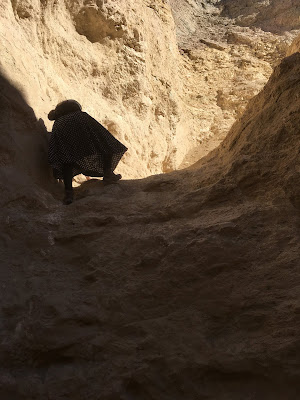 Matt and I would encounter two couples the whole afternoon.  The first couple were about our age and almost forcibly gave us snacks when I offhandedly mentioned that I thought they were brilliant for packing a picnic lunch to eat in the canyon.  We tried to refuse, but they were insistent so, hey, free snack (nuts and bananas).  It was lovely to nibble and gaze and probably did permit us to linger a longer spell than without.
We passed a slightly older couple as we were nearing the trailhead on the return trip.  The woman would remark (in a cute, but hard-to-place accent), "I don't think I've ever seen anyone hike in a suit before!" 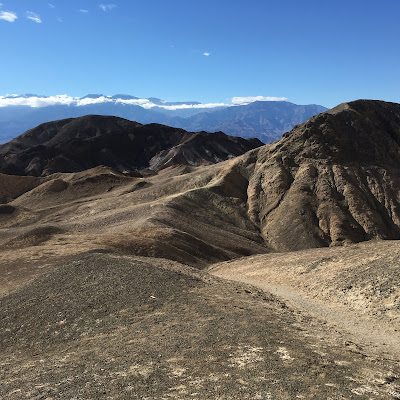 I'll sidebar again here to say that Matt hiked Desolation Canyon in his fabulously avocado vintage suit from Jess and Memo's wedding.  There are two reasons for this clothing choice, one pragmatic and one sentimental. 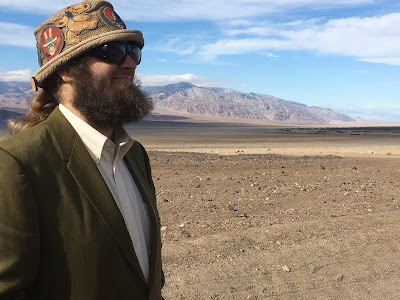 It was the last day of vacation and it was the cleanest outfit that Matt had at that juncture.  That is the practical bit.  The sentimental bit was that Matt thought it would be cool to explore a park in a suit--an homage to the old-school tourists from the black and white photos.  Those vintage adventurers were always so well dressed, even while hiking--suits and ties, hats and dresses.  He did look sharp contrasted against that backdrop, I gotta say.  Even if he went casual and skipped the tie.  I told him he should start a blog or Instagram account and call it The Well Dressed Hiker, but I know that he won't (lacking an interest in social media and computers, in general). 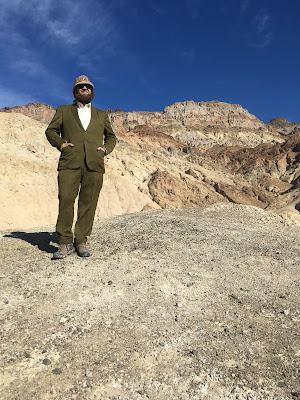 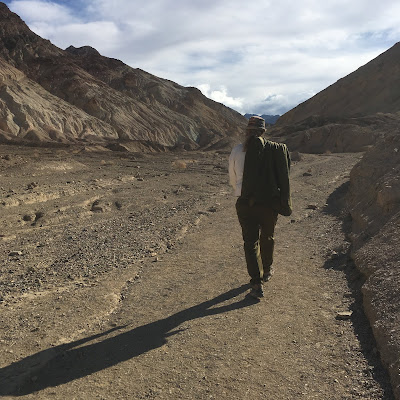 After the first (basically flat) mile-and-a-half the trail started to pick up some elevation and we slowly meandered up  and out of the lofty canyon walls to a relatively broad expanse of ridgeline at the top.  It was a sort of hub from which loads of canyons slithered off into the world. 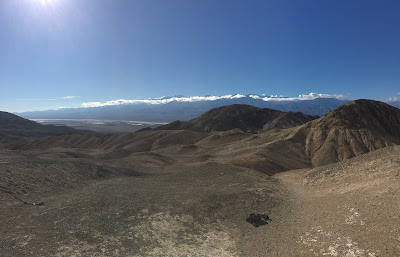 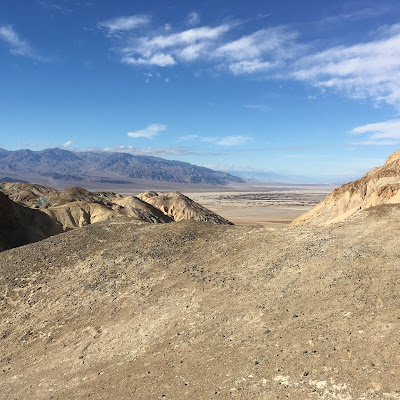 We could have kept going up to the highest peak--the snack pushers did and I am sure the view just kept getting better--but we instead lazied about in the sunshine, soaking in all the glory from that wide, flat spot.
The view was spectacular in 360 degrees.  Or 365 degrees as I said repeatedly until Matt asked where I was getting the extra 5 degrees.  It was just THAT awesome, I guess.  It deserved bonus degrees.  Plus, you know, I am lackluster at that whole numbers game.  I was spinning in circles, dazzled by the desert in every single direction.  The steep canyon drop behind me, the salt flats in the distance, the winding canyons in the foreground, the multihued rockwork, the vast expansiveness.  Spectacular.  Beautiful and desolate.  😏 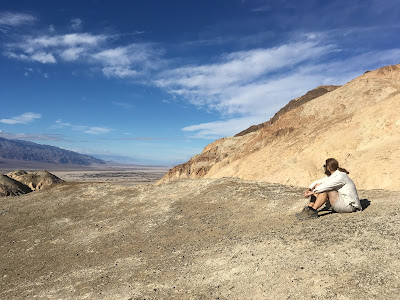 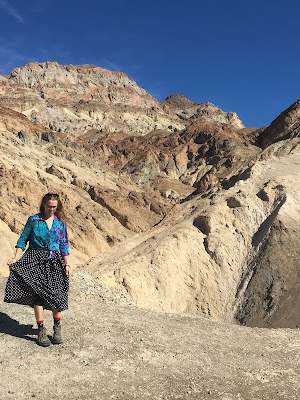 We stayed there for a healthy chunk of the early afternoon.  Just basking.  It was so quiet.  The sunshine felt glorious on my skin.  We even had to take off a layer or two when we reached the ridge top since we'd both worked ourselves into a lather on the way up--Matt especially in that suit.  I couldn't complain about heating up though.  (Have I mentioned that I spent half the time I was in Death Valley freezing my tush off while wearing every pair of leggings/pants I'd packed?!)

The winding hike out was easily just as gorgeous and stunning as the winding hike in, but in a different way.  When I first started hiking I was kind of down on out-and-back hikes since you cover the same ground twice.  I preferred loops where it is new terrain the whole way, more or less.  I've changed my tune though.  I realized that the experience is rarely the same on the way out and on the way in.  I see rock formations and mountains and trees from different angles and that view can be quite radically different, it turns out.  The wildlife and wildflowers I notice are usually different, too.  Sometimes the weather changes and that alters the experience, too--full sun versus rainy grey--regardless of the landscape being "the same."  Nothing really ever stays the same when Mother Nature is involved.
The hike back down Desolation Canyon was a totally different hike.  One of the things I particularly enjoyed was the canyon walls framing the salt flats below.  I didn't ogle that much on the way up canyon since it was behind me. 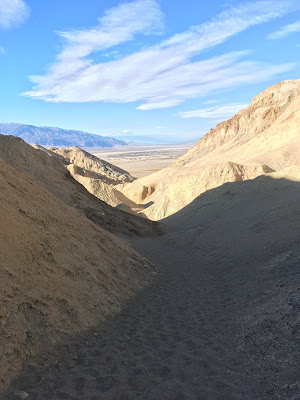 There were a couple dry waterfalls along the trail, but the most noteworthy formation for me was this humongous rock outcrop that was the palest, most beautiful, delicate seafoam green color.  I've never seen anything quite like it.  Desolation Canyon is right next door to the well-traveled Artist's Drive and has the same assortment of strikingly colorful rocks, but without the people since Artist's Drive is accessible by car whereas Desolation Canyon is accessible by foot.  (Side bar:  Artist's Drive had been closed due to the government shutdown and I wonder how much the auto traffic is audible from Desolation Canyon usually.  As it is we heard one vehicle while we were up on the overlook--someone driving on the road despite the barricade at the entrance.)
At one point the trail climbed up and over a sediment heap at the bottom of a gully.  It was such a substantial pile of sand and pebbles!  It was easily taller than Matt.  I was so impressed by it that I, as it turns out, recorded Matt going up and over on both the hike in and the hike out.  That heap of debris helped illustrate how thoroughly water plays a role in shaping these canyons...even if water was about the last thing brought to mind by all the sand.  Seeing the seasonal floods must be really something.  Terrifying and powerful, humbling and epic.
The geology of Death Valley is so very appreciable because the vegetation is minimal.  The oddly shaped rocks, the layers, the colors...they leap out to be marveled at with no obstruction.  Even people who aren't exactly geology nuts like us couldn't help but notice.  The processes and on-going outcomes were so visible. 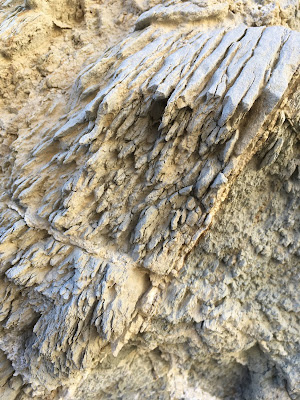 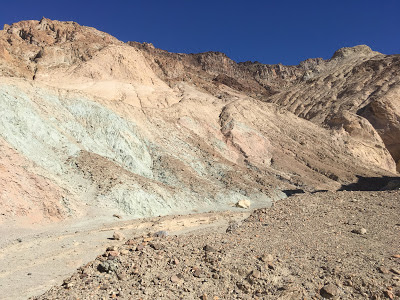 When we got back to the trailhead we were beyond content. 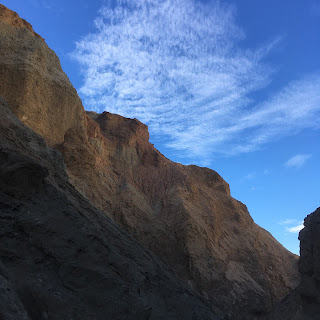 It was a tremendous day of hiking capping a truly grand Megavaction. 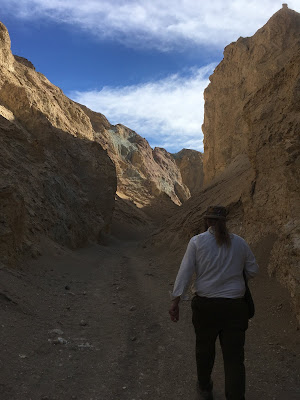