We're having another February of record-breaking cold and snow this winter.  This time the emphasis is more on the cold than the snow.  Recently I started calling it "coldmaggedon" in imitation of Seattle's "snowmaggedon."  I decided it deserved a proper name designation when confronted with the fact that it was colder all across the state of Montana than in the Arctic Circle--the northernmost US city, in fact--where my sister Sarah lives.  As my dad said, "That is just wrong." 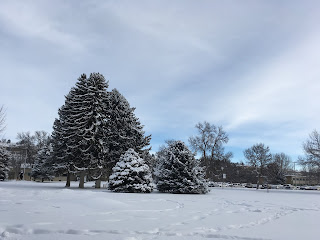 Here are some February Winter Weather Fun Facts I've put together, gleaned from the historical data charts on Weather Underground:

I even started riding the city bus to work it was so darn cold.  I usually enjoy my 2.5 mile morning walk, even in the winter, but when it is -5 that is just not the case.  I am totally sold on the bus, too.  It is amazing.  No scraping windows or warming up the car, no driving on ice and snow, no parking--and just a few minutes walking on each end.  It is basically made for people like me.  Who knew?!?  Gosh, I long to get back to kinder cycling weather though.  I truly miss it.
We went sledding last night.  The snow was so deep that many of our preferred slopes were not actually that great--the sleds would sink into the deep snow instead of just gliding over the top.  It happened to the runner sled and both styles of plastic sleds, too!  Our regular go-to slope was just not cutting it.  In fact, only the steepest hill was packed and angled enough to send us coasting. 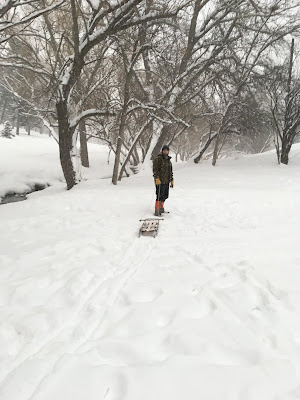 We still had a jolly good time though, limited sledding slopes aside.  We tromped about in the drifts--up over my knees--and made magnificent snow angels in the soft piles.  We laid on our backs watching the snow fall straight out of the sky at us until both of our glasses were layered with snow and we couldn't see anything!  It was so still I could hear the snowflakes hitting the ground and our coats--punctuated by delighted screams from the one well-packed sledding hill.  When we rode double on the runner sled we almost ended up in the creek at the bottom.  Gosh we were flying!
Ginger and Johnny both want to go outside.  Until we open the door and they realize they want nothing to do with the outside.  One of those first days of February--when it was 50 degrees--Ginger did spend a solid afternoon perched on the garden sink surveying her snow-covered domain.  Johnny occasionally insists that we open the front door, but visibly recoils from cold air as it wafts at her face.  She, too, has only been out once in recent months.  She's had to resort to nibbling the houseplants again since she can't get to any grass.
We got several suet blocks and the accompanying feeder for Christmas.  I hung it off the front porch railing, but the birds didn't seem to be hitting it up.  Thinking it was the location I'd chosen I moved the feeder to the patio table, figuring it was close to where I'd seen the nuthatches hanging out.  It has been much more popular there and so there it remains.  We've seen both White and Red-breasted Nuthatches, Black-capped Chickadees, Dark-eyed Juncos, and a Red Squirrel. 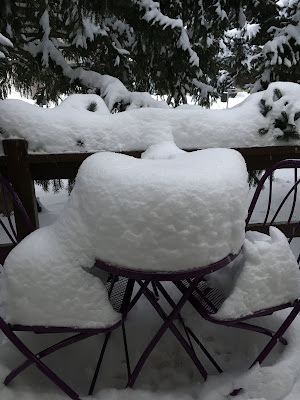 Buuuuuut, I didn't think about the snow accumulation and how readily the feeder would be buried.  It only occurred to me when I noticed that the birds (and maybe the squirrels) had hollowed out a nice access cave.  It is cold and food is scarce so no pile of fluffy snow would stop them from getting at that puck of delicious fat.  It made me laugh and made my day. 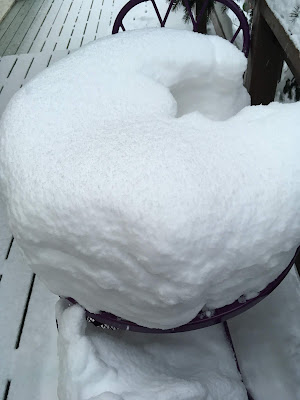 I sure wish it had been this snowy when all the Christmas lights were out.  Snow amplifies their delightful twinkle a thousandfold, if you ask me.  We had such a brown December.  That is certainly no longer the case.
On the agenda for the weekend:  More sledding!!!
By BLD in MT