BBQ flavor can be hit or miss with me.  It is sorta like "hot sauce" or "curry."  The term itself can denote so many different variations...some of which are finger lickin' good and some not so, at least to my liking. 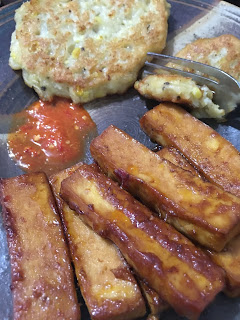 Often the sweet smokiness is just too cloying for me, so it is hardly ever a flavor on the menu at our place. 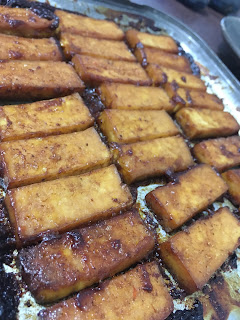 That said Matt and I have been on a barbecued tofu bender recently.  It all started because Matt's brother, Adam, got married last month and we were sent home with a couple different bottles of BBQ sauce leftover from the pulled pork they served.

Storytime with Beth Sidebar:  When I was in high school my mom served up a pulled pork sandwich to one of my friends as we were heading out the door.  I refused to let my friend get in my car--made her consume it standing on the sidewalk until it was totally gone--because otherwise it would stink up my whole car.  The memory is quite vivid because I think barbecued pulled pork is horrific.  So.Much.BBQ.Smell.   It isn't a vegan thing in any way, purely a food preference thing.  The previously mentioned cloying sweet-smokiness overwhelms my senses in a negative way.  I hate it.  It repels me.  So much so that I once made a list of the foods they'd serve in my personal version of hell and barbecued pulled pork topped the list.  Followed by all the creamy-based salads (egg salad, poatato salad, macaroni salad, tuna salad, coleslaw), served with a big Bloody Mary.  Ew.  Just ew.  ☺  I realize many, maybe most, beg to differ, but that's my take.

Months back I'd read a recipe in honor of The Year of the Pig on the Chinese calendar.  It was basically a homemade BBQ sauce with Chinese Five Spice Powder added to the mix.  For some reason it lodged in my brain, even though, like I said we don't really do BBQ much.  I was pretty happy about it though when we ended up with the bottles of BBQ sauce and the meal idea resurfaced from my mental recipe box.  I gotta say, it was spectacular, too.  Mmmmmmmm....so yummy and balanced in flavor.  I immediately wanted a repeat (and it was SO easy there was no reason not to).  Given my propensity to adore Asian flavors it makes only too much sense that I was pleased by this fusion variation.  It was a perfectly swell way to tweak the BBQ sauce to my preferences.  I highly, highly recommend it, even if you're putting the BBQ sauce on something other than tofu. 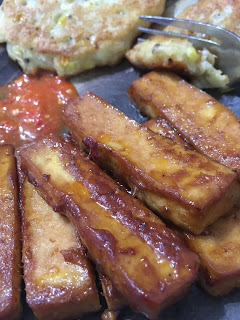 Matt also developed a delish BBQ blend that was equal parts The Hot Sauce That Matt Likes and the BBQ sauce.  Another brilliant way to tweak the sauce to make me enjoy it all the more. 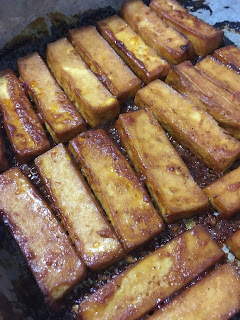 On the grill or outta the oven, these have been a very delightful addition to our tofu repertoire.  I might finally be hooked on something BBQ flavored that isn't a potato chip!
By BLD in MT