Matt and I have somewhat recently made some awesome new friends, Michelle and Dave.  We've known them very casually for some time as friends-of-friends that we see out at musical events mostly, but until the last month or so that was the extent of the friendship.  Then Dave invited us over for dinner an event we've replicated a couple times since with much enjoyment all around.  They love to cook delicious food and have people over to eat it, even better than that for Matt and I is that Michelle is vegan and Dave a very flexible omnivore who loves vegan food. They enjoy playing board games and listening to music both live and recorded.  They are quite smart and interesting and fun to converse with.  Basically everything I could be looking for in friends, really. 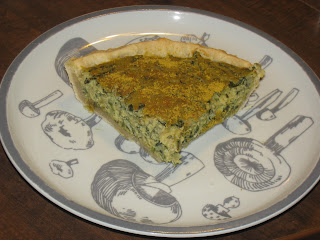 Michelle made us soup with some kale that we'd sent home with her from our abundance and shared with us a large portion of it.  It was really yummy (and that reminds me that I still need to get the recipe from her!).  It served Matt and I for dinner both Monday and Tuesday.  And then last night they brought over a vegan spinach quiche.  I've hardly had to cook at all this week and yet I've been eating so well!  Its been pretty awesome. 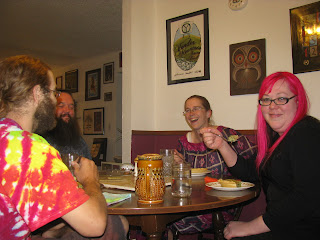 I'd never had a quiche before in my life, made vegan or with eggs.  I think this shocked Michelle somewhat.  I never enjoyed eggs so quiche was just never up my alley.  Also, as such I can in no way vouch for the similarity between this dish and a traditional egg quiche.  I can, however, vouch that it was absolutely fabulous tasting and very filling.  And really, that's the most important part.

She got the recipe here, though I think she modified it....just like I would if I'd been making it I am sure.
By BLD in MT