Well, I did make my own hot sauce.  After eating a few too meals that were good, but would have been GREAT if they were spicier I just decided to go for it.  I think I felt a little bit of pressure not to screw up or waste my precious homegrown peppers, but ultimately I figured I better just jump right in and go for it.  What was the worst thing that could happen?  I'd have a dozen peppers to throw in the compost if it failed.  And if it succeeded....well it would be pretty darn fantastic I thought!

I am a Frank's Red Hot person.  I like hot sauces in general, but all hot sauce people have one sauce in particular they prefer.  I think my sister's family is a cholula family, whereas Alli and J.D. are sriracha people.  I've always been partial to Frank's.  Its vinegary, and spicy, but not face melting.  I  eat it so much that we would buy the industrial size, something like half a gallon, and refill a normal sized bottle from it.  So, that last gallon is finally gone.  We bought it years ago (its not like it goes bad quickly since its mostly vinegar) and I'd been kind of waiting and wondering for the time this would happen--when the bottle would be empty and I'd need to resupply.  See, Frank's is not organic.  When I bought that last industrial size bottle I wasn't too concerned about stuff like that, but now I am.  I was wondering what I'd do when the jug ran out.  Would I continue to buy Frank's since I like it so much?  Could I find an organic (or local) hot sauce that wouldn't break the bank and that I'd enjoy just as much?  Or could I make my own?  Would I enjoy that as much as Frank's? 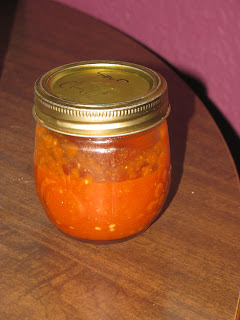 It turns out yes I can make my own and it is quite flavorful and spicy.  I don't think its quite a good as Frank's (yet) but I have a whole life ahead of me to tweak the recipe to my satisfaction and curiosity.  Some of the recipes I was looking at called for apple cider vinegar.  I'd like to see what that does to the flavor.  Others had a touch of sweetener.  I wondered what it would be like with the green cayenne peppers which I also have a jar of.

But since I was trying to replicate Frank's I just went with straight white vinegar and peppers.  It is darn good as it is, but not quite vinegary enough for me.  Matt says he like it better than Franks which he always found too strong with vinegar.

And it was so easy.  And makes it so that my hot sauce doesn't come in a one-time-use, disposable container that I'll have to just throw out or recycle.  And oh how I like that. 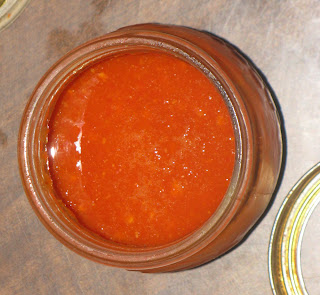 Beth's Red Hot (from Dried Peppers)
10 dried red cayenne peppers
1 C white vinegar
3 cloves garlic (I used my friend Derek's homegrown garlic which he kindly gifted us some of.)
1/2 t sea salt
Heat water to a boil
Pour over peppers in a small bowl until the peppers are just covered.
Weight the peppers down with a canning jar or spoons so they remain submerged.
Allow to sit for about 30 minutes or so until they are rehydrated.
Drain.
Put all ingredients into a blender and blend well, being very careful not to breathe anywhere near the open blender.  In fact, if you have rubber gloves and a dust masks its not a bad idea to use them.  Peppers can be intense, especially when being pulverized.
Pass through a fine mesh strainer if you wish to remove the seeds.  (Our Vitamix will just puree the seeds, too, so this step may not be applicable to everyone.)
Pour into your jar or bottle.

This recipe could also easily be multiplied and canned for future use.
By BLD in MT