The mama cottontail rabbit that live under the library has had her second batch of kittens for the season and much joy accompanies the sight of such a precious little bunny.   This is an annual occurrence, but this no less diminished my pleasure in watching them.  I mean, I think just about all babies (rabbit, human, or otherwise) are just precious and heart-warming in their innocent sweetness and softness and vulnerability. 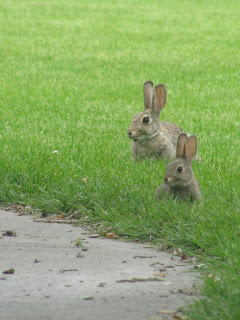 The whole library, staff and students, were just absolutely taken with the first batch who would boldly sit right by the front entrance as people passed them, even when they were so tiny you could probably fit all of them in your shoe!   The four kittens would cause quite a stir.  There were many days where just about every person who came in to the library came in talking about the bunnies.  "Did you guys know you've got bunnies out there?!"  "Aren't those the cutest little rabbits ever?!"  "Have you see those babies out there?"  And so on. 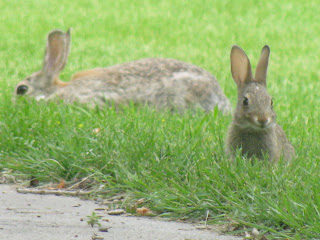 The second litter is a little more cautious (which I find a bit odd since school is not in session as it was with the first litter so there is less foot traffic).  They've been using what I'd considered the secondary hole further from the main door and have only just today started venturing out into the grass on the other side of the sidewalk from their home. Mama was keeping a sharp eye out though, as evidenced by her proximity in the photos.  So far, I've only seen one kitten in this litter. 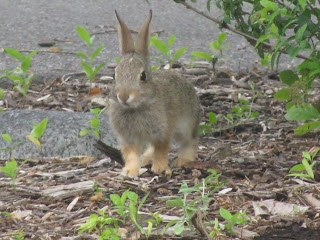 It is so interesting to watch as they progressively venture further and further from the safety of their hole.  It is also interesting to watch how they can disappear from sight, hole or no hole (like when they duck into the wood vines and lily leaves).  I cannot imagine what the great big, noisy world must feel like to such a small, little critter.
By BLD in MT